Share All sharing options for: Madden NFL 15 wants to teach you about football to make you a better Madden player

For as much as simulation sports games strive to replicate a particular real-life sport, having expert knowledge of the sport in question doesn't necessarily translate to success in the game. And you don't have to know a ton about football to be a good Madden player.

Madden NFL 15 developer EA Tiburon is hoping to change that this year. The studio is expanding the Skills Trainer mode that debuted last year in Madden NFL 25, adding new drills that are meant to teach players basic football concepts and strategy in an effort to make them better at playing Madden. And the Skills Trainer is now paired with a mode called Gauntlet that puts that training to the test, to see how long players can last through a set of increasingly difficult challenges.

This initiative to educate Madden players about the sport of football goes hand-in-hand with Tiburon's new direction for the franchise in the era of the PlayStation 4 and Xbox One. The studio is redoubling its efforts to build a game that plays more like real football; the developers are aware of the criticism that over 25 years, Madden has often felt like its own brand of football rather than an accurate simulation of the sport.

"It doesn't play like football; it plays like Madden plays. And we wanted to change that," said Rex Dickson, Madden's creative director for gameplay, in an interview with me last December. Dickson joined Tiburon in early 2012 and helped formulate a different course of action along with Cam Weber, head of EA Sports' football division.

"As Cam and I crafted this vision to take the game toward 'more realistic and more authentic,' what we realized is, if we don't teach people how football works, they're never going to understand this game," Dickson continued. "That's really why the Skills Trainer mode was developed, is because I basically pitched that we need a tutorial system if we're going to keep going in a realistic, authentic direction."

Dickson told me that Tiburon was getting plenty of positive feedback on Madden 25's Skills Trainer mode. The studio is able to track where Madden players spend their time in the game. That data, known as telemetry, indicated that not only were players using Skills Trainer at an impressive rate, but also that the ones who stuck with the mode ended up spending more time playing the game overall. 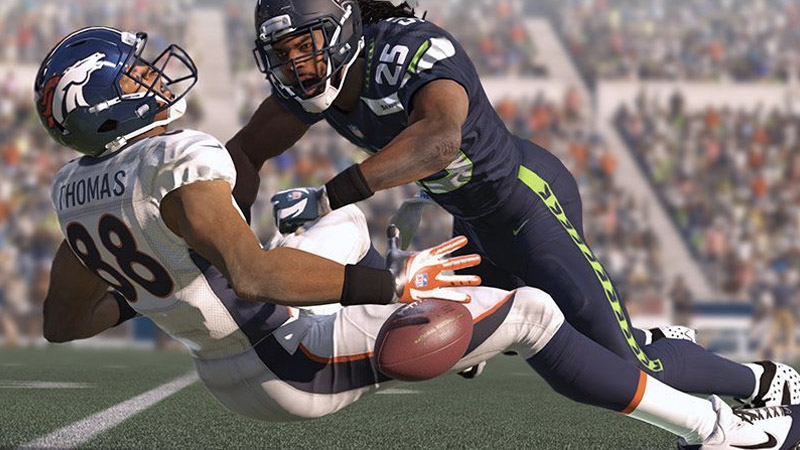 The defense presents the opening argument for Madden NFL 15

The data also illustrated where Madden players were struggling, which allowed Tiburon to build new tutorials and tweak existing ones around those problem areas. Skills Trainer in Madden 15 features 48 different tutorials, drills and challenges. Many of them teach controls and plays on both offense and defense, like how to pull off a user catch or run the triple option. This year, the mode also offers entire sections dedicated to football concepts and strategy.

"The one thing we did [this year] that we've never done in the past was actually teach the game of football," said Danny Doeberling, a designer on Madden 15, in a phone interview with me this week. "A lot of people will call Cover 2, they'll call Smash plays, but no one really knows what it means. Some of our hardcore guys do, but the majority of our Madden users don't."

So Tiburon brought in Bill Courtney, the high school football coach featured in the Oscar-winning 2011 documentary Undefeated, to help explain football to Madden players in Skills Trainer. He helped the team figure out how to illustrate aspects of the sport, and recorded voice-overs as well. 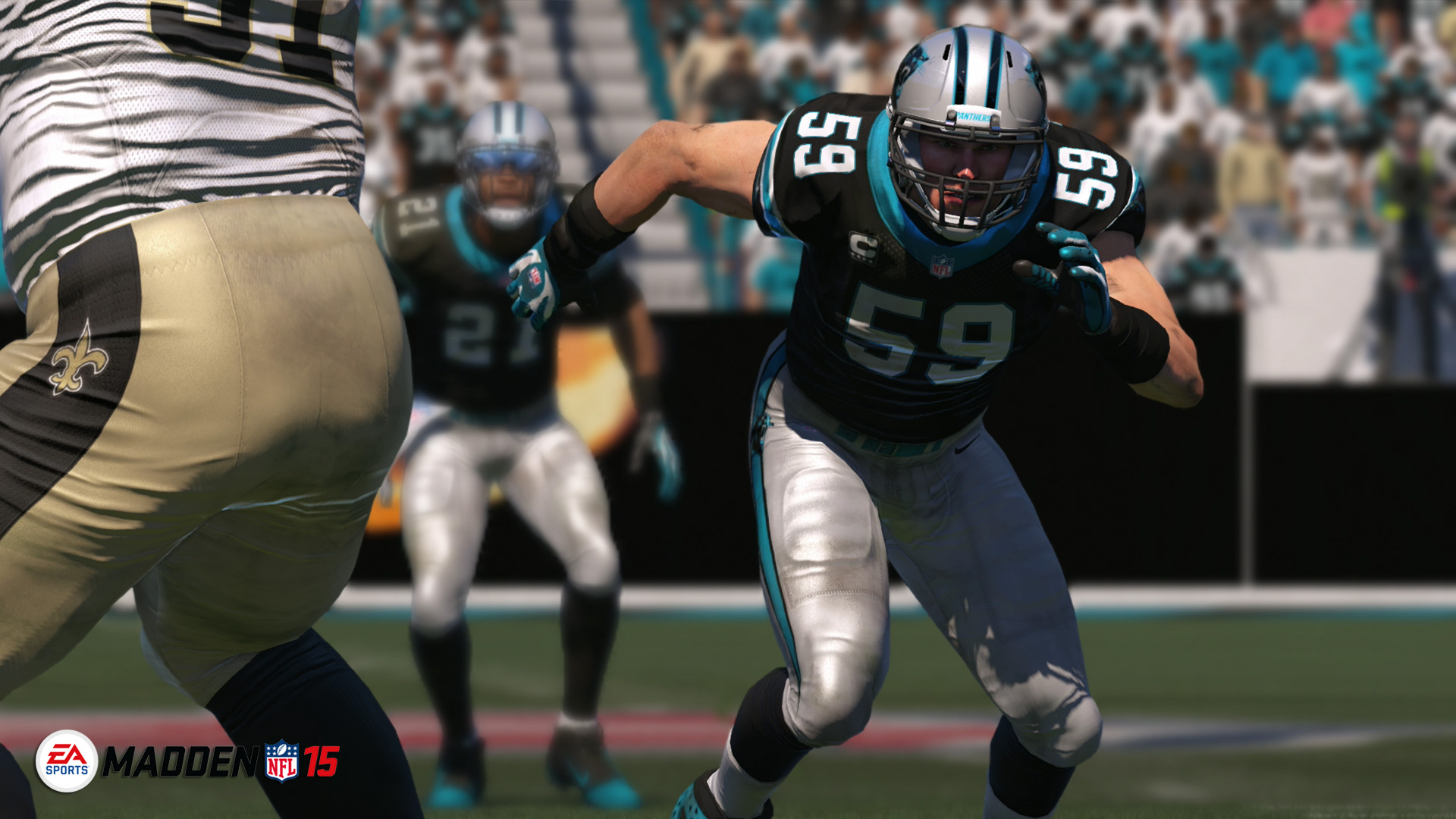 I went through a few Skills Trainer exercises during an EA press event in New York yesterday, with Doeberling explaining the setup. We started out with the Cover 2, a key scheme for defending the pass. I thought Courtney's voice-over, augmented by on-screen visuals, did a terrific job of explaining how to identify the Cover 2 on the field: two deep safeties, with cornerbacks giving your wide receivers five yards of space.

The game then displays the gaps in the Cover 2 — the areas on the field in which you'll be more likely to find open receivers — and finally, tells you the offensive plays that are best suited to exploiting those spots (Flood, Smash and Verticals). After the tutorial, Skills Trainer moves into drills, and awards medals based on how often you succeed.

"For the tutorial, we tell you what's going to happen. For the drill, you have to make the read yourself," said Doeberling.

Skills Trainer, like any attempt at studying, seems like it will bear more fruit for players who take the time to complete a wide variety of the exercises. But even those who give it a cursory run-through will likely learn something. I already knew what a Cover 2 defense was, but after playing the associated drill, I now know how best to attack it in Madden. That's the main goal for Doeberling, who is aware that players are "not going to be high school football coordinators" after going through Skills Trainer.

While Skills Trainer is a more regimented, serious experience, Madden 15's new Gauntlet mode takes a lighter tone. It's designed to reemphasize the knowledge players gain from Skills Trainer, but in a fun, arcade-like setting. Gauntlet throws 40 different levels of challenges at you, with an outlandish "boss" challenge every five levels; if you fail five times, your run ends.

The special drills often ignore Madden's simulation heritage: The first one tasks you with kicking a 110-yard field goal in 220 mph winds. Still, that particular challenge is an exaggerated way of testing your proficiency with Madden 15's revised kick meter, which now displays three different ball trajectories with on-screen arcs. Doeberling explained that Gauntlet may also expose players' weaknesses in particular drills, which will hopefully encourage them to head back into Skills Trainer to study up.

Gauntlet's 40 levels run the gamut of difficulty from Easy to Medium to Hard to Elite. If you manage to survive all 40 levels, you can "prestige" and start all over again, but only with the Hard and Elite challenges. While there aren't dedicated online leaderboards in Gauntlet, the mode does include social hooks, so you'll be notified if a friend happens to top your high score.

Skills Trainer is now part of the onboarding process for Madden 15; the first time you boot up the game, it'll encourage you to check out the mode. This is a step in the right direction. It's not enough to include these tutorials in sports games, because hardcore players will ignore them and newcomers may not be able to find them. And unlike the start of an action title or shooter, it's tough to make a tutorial out of a default exhibition game in a sports title. What's even more encouraging is that with Madden 15's Skills Trainer and Gauntlet, Tiburon may have found a way to make studying fun.