Hands on with Dragon Age: Inquisition: The importance of dying

Share All sharing options for: Hands on with Dragon Age: Inquisition: The importance of dying

I killed a dragon today, and it was upsetting.

He guides us through the brush, past the camp, along a wooded path.

As we walk around a bend, the canopy of trees suddenly part, revealing slate grey skies. The narrow path opens to become a valley of jutting rock and the occasional copse of trees.

In the distance a stream; in the stream, a small creature.

No that's a hatchling, he says. That's it.

Suddenly the sky darkens, a massive shadow passes overhead, I look up and see an enormous creature, a high dragon, soaring past.

I'm not worried, playing Dragon Age: Inquisition with one of the game's creators, using characters loaded up with abilities, weapons and an endless cache of power means that the most blundering of adventures should be able to finish off massive dragons.

The creature spews flames at us, snaps at our shields and staffs, stuns our characters to a standstill with deafening roars and then, inevitably, dies, its corpse resting on some distant perch, the victim of a swarm of arrows and magic missiles.

The death isn't noble, nor, it felt in this preview of an early build of the game, necessary.

It wasn't tied to some important quest. 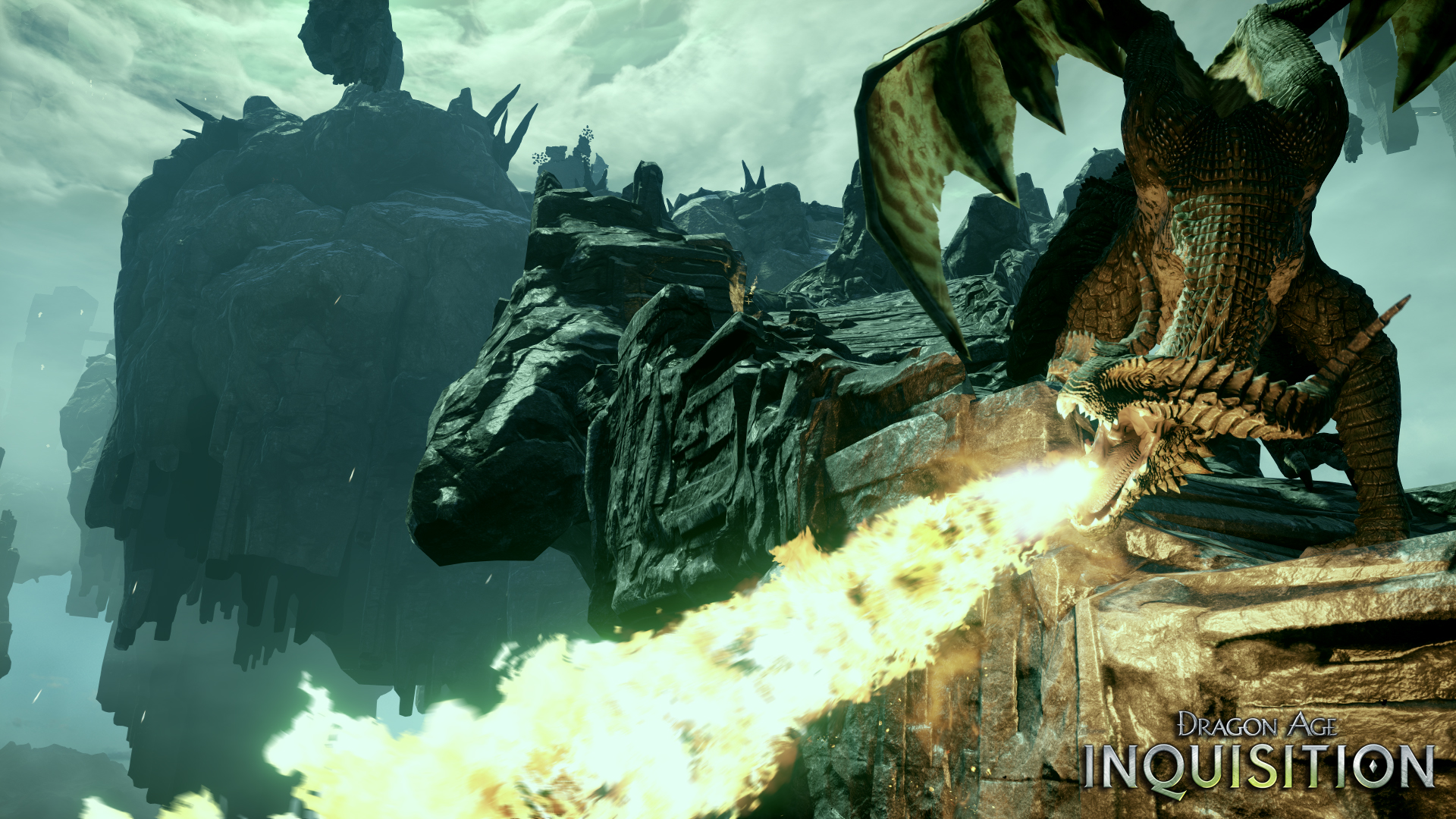 That feeling of death for death's sake came to me in the midst of battle.

Early on, Mike Laidlaw, creative director of the game, pointed out that the dragon was so massive that it had individual hit points for different parts of the body. Those body parts could be, essentially destroyed, and the dragon would react.

So I set about attacking the dragon's right hind leg. Freezing it over and over again and then pounding into it with a stone fist. Eventually the creature roared, and then it buckled, its leg limp, and collapsed on its side for a moment.

I play games to kill, not to injure, was the first, odd thought that popped into my head.

When the creature righted itself and flew away, its rear leg curled protectively curled up underneath it, my band of companions took it down.

The fact that this completely unscripted, digital dragon hunt could elicit a genuine feeling of guilt and sadness speaks volumes for the game.

If killing one of this fictional world's most dangerous creatures, something Laidlaw calls an apex predator, can make me feel pity, what would seeing a comrade or a villager die feel like?

I sat down on a couch next to Laidlaw and played through what was essentially the E3 presentation, using an Xbox 360 controller on a Windows PC build of the game.

Laidlaw warned me early on that this build was nearly three months out of date.

Inquisition seems to take the best of its predecessors and combine them with some new innovation and a compelling story to drop players into a riveting real-time role-playing game.

What that means is that the game world lives around you and that while there is still an important narrative, big story beats as Laidlaw called them, the game allows, even encourages, exploration, adventuring and play.

"Playing your way is something we've been striving for," he said.

There are a lot of clever little touches built into the game to help blur the line between scripted, narratively-driven moments and just having fun.

Players will take on the role of an Inquisitor, a character they shape themselves. You can choose one of three classes, one of four races and a gender. Each gender, I'm told, has the option of having either a British or American accent.

Throughout the game, Inquisitors will recruit comrades who can be controlled or fight alongside them with the help of both tactical commands and computer control.

This party is a big part of putting players in the world, Laidlaw said.

"It's a Dragon Age standard having the party very present," he said. 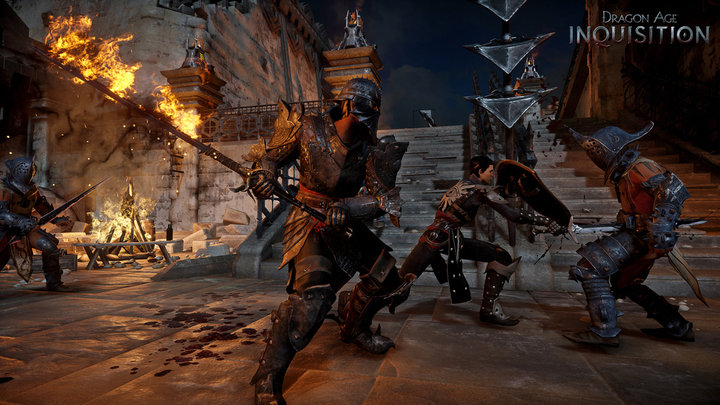 Moral quandaries in a vast world

That means they don't simply trudge behind you, but chat to one another, discuss your latest exploits, joke, get in arguments.

"Banter between the character is how the party brings itself forward," Laidlaw said. "They will chatter among themselves, talk about that thing you did. ‘Oh, you just killed a dragon.'"

My hour or so with the game took place in the world's Hinterlands near the Red Cliff Village. The Hinterlands, Laidlaw told me, are so big you could "pour all of Origins into just this region and it would fit."

The game's world is made up of more than eight "enormous regions" like the Hinterlands and many smaller ones. And these locations are packed with choices and consequences, all governed by what Laidlaw called the World Master.

"It's a content manager that is constantly checking the world state and what's happening," he said. "Seeing where the player is and populating the world around you as you move through it. It also keeps track of what the player has done.

"So if you slaughter a dozen ram, the population in the region will start to fall and other creatures will move in. If you wipe out a bunch of bandits in an area, they'll leave you alone for awhile."

But unlike previous versions of Dragon Age, this world repopulates, so eventually those ram and those bandits will be back.

The world reacting to players is an important part of both gameplay and the story. The concept behind Dragon Age: Inquisition is the notion that you're the underdogs, helping to form what will be, in Star Wars parlance, the rebel alliance.

"We thought what if instead of joining the rebel alliance, what if you can found it?," Laidlaw said. "What if from the beginning you were there and the old establishment saw you as kind of threatening?

"It gives the game a very different feel and arc."

The Inquisition, Laidlaw said, is designed to be like a character unto itself, leveling up with you along the way in terms of how people feel about it in the world.

One of the big changes Inquisition introduces, or reintroduces, to Dragon Age is the tactical camera. In Dragon Age: Origins, the PC version of the game allowed players to zoom out of the action, seeing a battle from an overhead view. That option was completely dropped for Dragon Age 2. A refined, more robust version of it returns in Inquisition.

At any time, in every version of the game, players can go into tactical view. Tactical view pauses the action of the game and zooms the camera out to an almost top-down perspective. You can then select a character and issue a command.

In the version I played, I used the controller's back button to freeze time and then the direction pad to cycle through the characters in my group. Moving the thumbstick let me push a targeting reticule around on the ground to place where I wanted a specific character to move, or who I wanted them to attack. Laidlaw told me that the latest build of the game drops a chess-like piece which looks like the character, on the ground where you have them moving, to make it easier to remember who you have doing what when in tactical view.

I was able to hold the right trigger to restart time, allowing me to move the action forward in spurts so I could micro-manage the battle from above if I wanted to. I was also able to flip back and forth easily between tactical view and the game's standard third-person perspective. That's how Laidlaw plays the game.

"My personal play style is to start a battle, then use the tactical camera to set things up and then let AI-control the team while I control my character," he said. "Some people play through battles entirely top down."

I found that my play style was much like Laidlaw's. 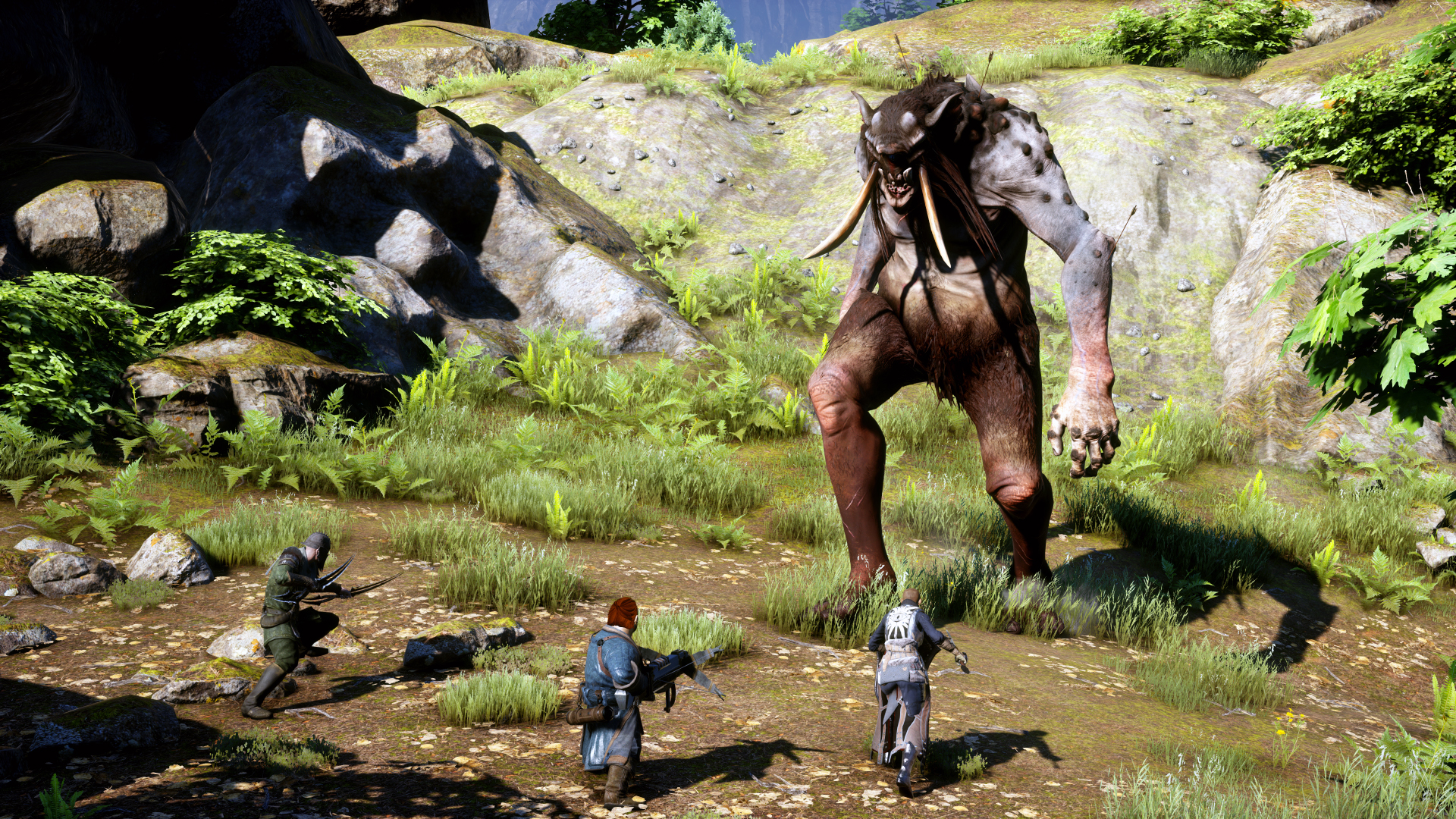 When I came upon an encounter I would immediately freeze time. Sometimes this resulted in spectacular frozen moments.

During my battle with the dragon, my jump to tactical view froze a massive fireball in mid air. As I figured out how to place my units, I realized that I was placing one of the characters directly in the path of the fireball, so I pathed her around the danger and to a safer location.

Once I set up my basic commands, I tended to use the right trigger to move everyone to their positions in spurts. This afforded me the ability to rethink my commands or react to enemy movements. When the character I wanted to control in battle got into the fray, I usually jumped back to the standard third-person perspective and played through the encounter that way.

The game also allows players to quickly jump between any one of the group instantly by tapping up or down on the direction pad. I didn't use this that much in battle, but it was nice to, for instance, jump between the tank fighter I had placed in the thick of combat, to the archer I had placed up on the stairs.

Combat was frenzied, colorful and rewarding. Each character I controlled was loaded up with abilities, so many that I could use both the face buttons to use attack and hold a trigger to get to a second batch of abilities.

The characters were all minutely detailed and, it turned out, very customized.

Laidlaw said that everyone, both the main character and your followers, can have their armor customized. The game also features crafting, driven in part by killing the many wild creatures you see around the world.

All my friends are dead

Dragon Age: Inquisition, due out on PlayStation 3, PlayStation 4, Windows PC, Xbox 360 and Xbox One on Oct. 7 in North America, arrives at an opportune time for works of high fantasy.

"Globally we've seen fantasy go through a renaissance," Laidlaw said. "Television and movies have the production values to deliver those experiences correctly. People to to see Lord of the Rings and go, ‘That's really cool, I get that.'

And it helps that HBO's A Game of Thrones has become such a massive hit.

"It's certainly become a genre that is more accepted and respected," he said. "Game of Thrones says that the stakes should be high and they do a very good job of doing that.

"We try to give you that same sense of drama, you understand the repercussions of your decisions."

And as with Game of Thrones, Laidlaw points out, Dragon Age isn't too shy about killing off characters.

I see that later in my play-through of the demo when I come to a cut-scene that has a surprising, bloody ending. Moments later, my group is nearly cut down.

Even in the short time I spent playing the game I had already built up some attachment to the group, and the consequences, their deaths, was upsetting.

Laidlaw was quick to point out that what I witnessed, how my play-through of this early section of the game ended, wasn't a moment everyone will see.

"That sequence is the direct result of the choices you make," he said. "That may not appear to everyone in their play-through."