Share All sharing options for: LeapFrog is making its own game console aimed at keeping kids safe and active

Children these days are gaming. Between the ease of access to tablets and smartphones and kid-focused console accouterments such as those accompanying the Skylanders and Disney Infinity franchises, video gaming in hard for kids to ignore. But Leapfrog Enterprises, a company focused on creating educational entertainment products designed for children in the single-digit ages, believes more work needs to be done to provide kids with safe, appropriate gaming spaces.

According to vice president of content development David Perkinson, it's rough waters for both children and parents in the gaming space. Apple and now Amazon have struggled against the Federal Trade Commission with lawsuits alleging parents have lost millions of dollars to unauthorized in-app purchases made by children due to insufficient parental controls. The parental controls for video game consoles "aren't that great" either, and many parents don't set them up to begin with or do so correctly. These leave children exposed to content they shouldn't be and also presents kids under 8 with a range of games that just aren't age appropriate.

"Within the last few years, we've heard more and more kids talking about how they want their own console gaming experience," Perkinson told Polygon. "They see their older brothers and sisters playing consoles and they try to play, but these consoles aren't designed for them. From a hardware perspective, from a user interface perspective — this stuff is not made for 3-8 year olds, it's made for sophisticated players. And on top of that, there's stuff that they shouldn't be playing anyway."

With LeapTV, LeapFrog is trying to make the first, and best, home gaming system designed specifically for younger children. The hardware, shown below, is small and simple — a camera and a disc-shaped main console that fit snuggly alongside the television screen. The controller is unique; Not only is it designed to be resistant to breakage and comfortable resting in smaller hands, one of its handles can be pushed outwards and snapped in place to transform from "classic" analog controller mode into a wand shape. This configuration for the controller — "designed for little hands, to be sturdy and tough," Perkinson said — is good for many of LeapTV's motion-control games, which seem to outnumber its library of traditional, non-gesture-based titles.

The emphasis on motion control is part of LeapFrog's endeavor to get children playing, but also up and active (the company is also released a child-tailored fitness band later this year, a Tamagotchi/Fit Bit crossover called the Leap Band). The best way to do this, Perkinson said, is to put them on screen — captured by the LeapTV camera — and put them in the center of the action. Games involving dancing and karate-chopping matches shapes are designed to teach, but also to encourage physical fitness. 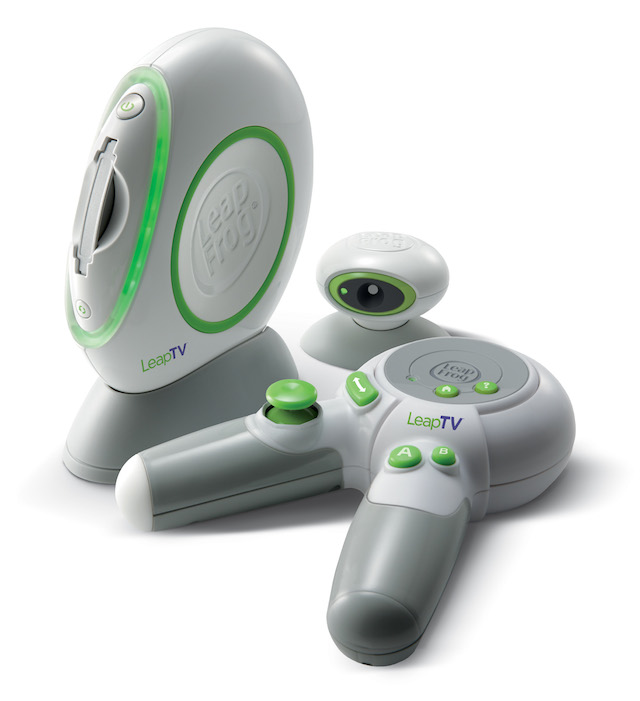 "You get a much more positive, visceral response when a kid is the star of the game," Perkinson said.

LeapFrog wants the games to be the stars of the show and will be offering physical cartridges at retail as well as console access to an online store offering downloadable games and videos. Game content is based on in-house properties as well as licensed ones, such as Disney's Sophia the First and Barbie. The user interface is also entirely designed around the games, bringing players to a main menu that displays icons for the available titles front and center. Three small bubbles on the bottom of the screen represent the console's display options.

"We wanted to create a feeling of independence for kids," Perkinson said. "We wanted to give them a chance to get into games themselves without a parent having to be involved."

But in terms of incentivizing families to buy LeapTV rather than buy younger-tailored games for the PS4 or Xbox One in their living room, Perkinson said that those experiences don't come close to what LeapFrog is offering. Children can be autonomous in their gaming habits with LeapTV. Not just independent, but safe — parents can rest easy as all content has been curated to keep inappropriate media out.

"Everything has been thought through from the very beginning to be age appropriate," Perkinson said. "Parents won't have to worry, and there isn't any content in there that would be too advanced for children. Even with something like the Wii, which is still seen as a kid-friendly platform, there are still games that are too complex, too fast or the user input is too complicated. LeapTV is designed to meet the needs of these younger players.