Take a look at The Long Dark's lovely apocalypse

Share All sharing options for: Take a look at The Long Dark's lovely apocalypse

One of The Long Dark's primary attractions is a gutsy art style that seeks to render a world that is both alluring and stark.

In a new trailer, out today, the Hinterland-developed game's post-apocalyptic environment is explored, including the snow-covered hills and sparsely furnished cabins where players will seek to survive. Set in the aftermath of a geomagnetic disaster, it's another game in which players wander around seeking the necessary tools to survive. But its look and its eerie soundtrack set the game apart from the competition. This isn't a game about zombies. Danger comes from wild animals, starvation and the cold. 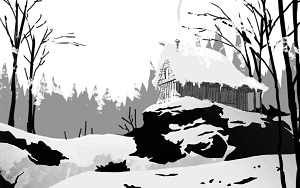 The Long Dark is about self-reliance in a hard country

"The information that you need to succeed is embedded in the world itself," explained creative director Raphael van Lierop in a recent Polygon interview. "You can hear the tone of the wind might change, and you'll see the wind, the snow will start to pick up. And you'll realize, 'OK, the weather's changing now, maybe a storm is coming. I better take shelter.' This is about man versus nature and trying to just survive against the elements."

Hinterland has been gathering feedback via a closed beta and is almost ready to release The Long Dark on Steam Early Access in September. A new promotional website was also launched today.

"Being on Steam Early Access will give us access to a wider audience," offered a Hinterland statement. "This will help us do a better job tuning the game's sandbox mechanics, fixing bugs and compatibility issues, and help us understand what kind of features and content the community is excited about."