If playing LittleBigPlanet 3 doesn't inspire you with pure joy when the game comes out this November, then you might not have a heart.

The game's announcement during Sony's E3 press conference earlier this summer appeared to have that effect on its audience. The LittleBigPlanet 3 title card hit the big screen with no preamble, and after a brief second — attendees seemed to check themselves, wondering if they were, in fact, seeing what they were seeing — a wave of euphoria hit, a surge of delighted cries and whoops that surged across the crowd. From where I was sitting in a press box off to the side of the stage, it was hard not to become infected with that feeling — that feeling that you were coming home, that you were just surrounded by nothing but pure good stuff.

During my hands-on time with the game at a Sony event yesterday, I felt exactly that way as I spent some extended time with Toggle, one of the three new characters joining Sackboy on his adventures. Toggle's special power is to, well, toggle; Players can push L1 to make him smaller or bigger, depending on the puzzle that needs solving. Small Toggle can sneak into tiny spaces and grab hidden items, as well as move more quickly and run on top of water. Larger Toggle weighs down certain pressure points scattered throughout the environment, allowing players to move a suspended platform downwards or press buttons.

Tom O'Connor of Sony's European XDev team explained that the three new characters — along with Toggle, a dog-like critter named OddSock and the bird Swoop — were added to give the game's multiplayer more depth. Sure everyone playing together as various Sackboys was fun in previous games, but with each character now having a different function and special abilities, collaborative puzzle solving within levels could be more challenging as it requires all four's unique skillsets. 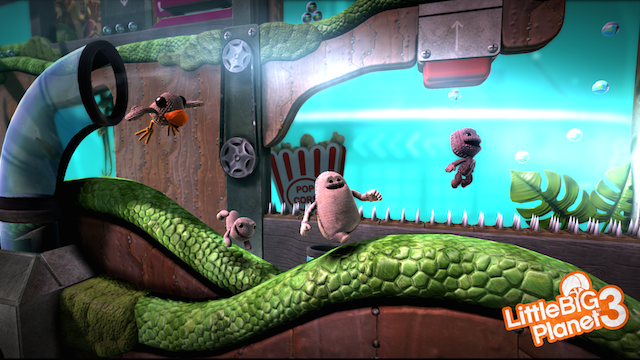 "We're always thinking about the tools and what the community will do in the game [for LittleBigPlanet]," O'Connor explained. "New characters were the first thing we thought about when we started LBP 3, but we were thinking about ways to expand on previous games.

"These new characters came later on, but we thought it would be really nice to give people something different than Sackgirls and Sackboys," he added. "Each character has a unique silhouette and unique abilities, but you can also completely customize their look and what they do. So as a creator, you can also create characters."

Toggle can breeze through levels just as easily as Sackboy has in past LittleBigPlanet games. But what's even more satisfying about cranking through puzzles in LBP 3 is the added dimension to the play area. Players can now jump forward and backward across larger fields of depth — this was feasible in a small way in previous games, only by a few steps, but this time players have tons more room to move around. My Toggle bounced backward and forward across different spaces collecting new items.

In addition to this new depth of field, O'Connor said players can stream LBP 3 levels together, creating "endless worlds" to romp through. There are also 60 new tools for players to construct their own levels. Developer Sumo Digital has also worked to balance the number of lives available to players; Dying, or wiping out on poisonous gas or spikes, in LittleBigPlanet games has always been meant to be funny, not a punishment. Developers also want to challenge players without punishing them for needing time to work out specific puzzles. 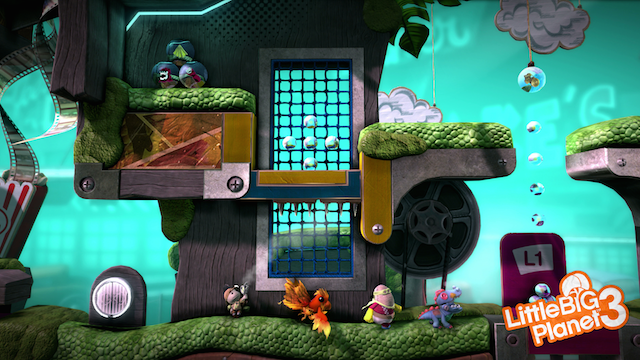 "With LBP it's about having fun, so we don't want people to die a bunch and then have to replay a whole level," O'Connor explained. "We've balanced it out. Dying can be quite funny, actually, when you, say, see characters land on spikes. It encourages both collaboration and competition.

"It depends on the level with how many [lives] we give, but as a rule we err on the side of caution and we tend to give people as many lives as we think they'll need," he added. "Once you get towards the end of the game we make it more challenging, but overall you get plenty of lives. And as a creator, you can give players as many or as few lives as you want."

O'Connor asserts that none of these features are just aesthetic. Sumo Digital wants to expand the way people play LittleBigPlanet, and with LBP 3, they may have gone overboard with new stuff, but in a totally good way.

"These fundamentally change the way you can play, and what you can create," he said. "Day one, you can play all half-million levels created [for previous games] in LBP, but it's that next generation of the game that really brings the interesting stuff."