NFL 'Sunday Ticket' coming back to consoles and mobile, no DirecTV subscription required

Share All sharing options for: NFL 'Sunday Ticket' coming back to consoles and mobile, no DirecTV subscription required

The "Sunday Ticket" service offered by DirecTV — essentially delivering every Sunday afternoon NFL game except the one involving your local team — appears to be coming to personal computers, consoles, tablets and mobile devices this season, with no subscription to the satellite provider necessary.

Technically, the service is intended for those who are unable to use DirecTV, perhaps because of their location or building restrictions. You'll need to complete a form to learn if you're eligible for the service. Places like apartment buildings and college dormitories can pick any of the streaming options. But some homes may be ineligible for the streaming service, because DirecTV would like those residents to subscribe to their satellite service.

A promotional page at DirecTV's official Sunday Ticket site lists a $199.99 package available for PCs, tablets, laptops and mobile devices — but not gaming consoles. If you want to watch NFL Sunday Ticket on a PlayStation 3, PlayStation 4 or Xbox One that will cost $239.99, but won't include the option to watch on PC, tablets, laptops and mobile devices.

It should be noted the "RedZone Channel," in which host Andrew Siciliano surfs the day's entire slate of games for the viewer to find ones where a team is likely to score, is not a part of either package. Red Zone Channel is only a part of Sunday Ticket Max. That service, which lets you watch on PCs, tablets, laptops, mobile devices and consoles costs $329.99.

In any event, none of these subscription options depend on a DirecTV satellite subscription, per the page on DirecTV itself. 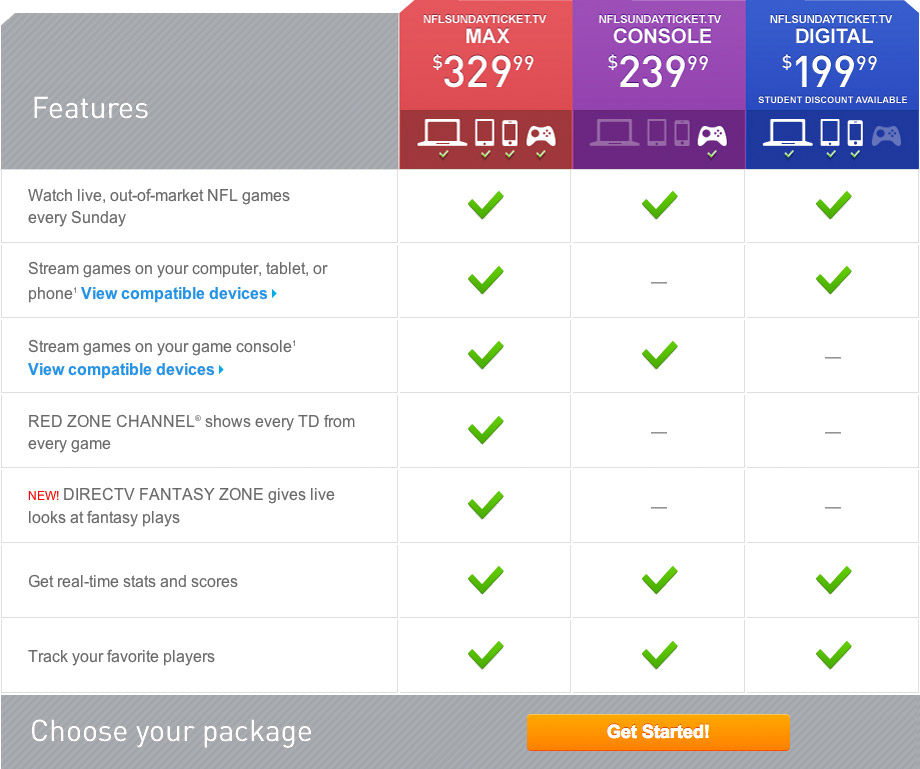 Last year, DirecTV offered its Sunday Ticket Mobile/PC service — with the "RedZone Channel" — as a premium in the $99 "Anniversary Edition" of Madden NFL 25. The PlayStation 3 app serving Sunday Ticket for the 2011 and 2012 seasons was pulled last year.

Redeeming the code in Madden 25's anniversary edition required telling DirecTV you were unable to subscribe to the full satellite service (even if you were), and limited EA Sports' ability to fully market the feature.