She should have never come home: the startup founder supporting Superhot

Share All sharing options for: She should have never come home: the startup founder supporting Superhot

One of the reasons that the game Superhot will be made is because Martyna Borkowska came home.

Borkowska should have stayed in the Netherlands where she was studying abroad. She should have found a high-paying programming job there or somewhere else in Europe. At the very least she should have gone to graduate school.

Instead she came back to Lodz, the third largest city in Poland. A city so crippled by urban blight that it’s called Poland’s Detroit.

"It has a stigma of being the ugliest city in Poland," she says. "You can see the difference if you go to other cities. They are all nicer."

Instead she came back to Lodz to take a chance at founding her own company, called BlueBrick. It's a technology consulting firm that also doubles as an incubator. She came home to become part of a new entrepreneurial class helping Lodz, and Poland in general, climb out of a decades-long economic slump.

Borkowska founded BlueBrick with her two college classmates, Dominic Stozek and Tomas Kaczmarczyk. "They came to me and asked if I wanted to join their company," Borkowska says. "I thought for five minutes. What’s the worst that can happen, and I said, ‘Sure. Let’s do this.’ They were surprised I didn’t think about it longer."

The reason Borkowska was so quick to agree was because she was confident in her own programming skills, and the skills of her co-founders. They were young, they were smart, and with the help of some government grant money they had almost nothing to lose by trying.

And much to her surprise, one of her company's next projects is a video game.

Today BlueBrick has contracts with countries throughout Europe to make e-commerce sites, educational portals and electronics hardware. Their brand new office is filled with young, intelligent people who are just as good with a soldering iron as they are with code. And they even have a game designer on staff. It was his idea to make Superhot during the 7DFPS game jam.

That prototype was a hit, and one $250,000 Kickstarter later Burkowska is nearly ready to spin the Superhot team off into its own company.

"There is a huge community of programmers, developers, and specialists here in Lodz," Borkowska says. "There are quite a lot of IT corporations, but they are [for outsourcing] programmers. The community is very big, but not many business owners."

"What we are doing is rather unique."

Borkowska says that an entry-level programmer in Lodz could make somewhere near $650 a month. BlueBrick’s Kickstarter alone brought the company enough revenue to pay 32 programmers for a year. It's an accomplishment that brought the mayor, Hanna Zdanowska, to their offices not long ago for a visit. 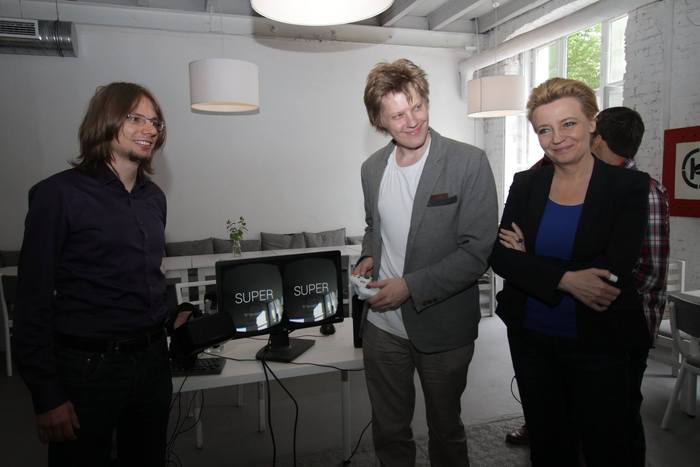 Borkowska says she’s been lucky to have been received so well by Poland's male-dominated technology industry.

"I started the company with the Tom and Dominic, who both believed in me so much," Borkowska says. "I never heard a bad word from them. They always thought I was capable of this. So in my environment in BlueBrick, I always felt welcome and I always felt in the right place."

Now Borkowska is giving back to younger, college-aged and professional women in Lodz. Through an organization called Geek Girls Carrots she’s sharing her entrepreneurial story, and working to inspire other women in technology fields in Poland and across the world.

"For me it began as a group of professional women in IT in Lodz," Borkowska says. "In every major city in Poland there are similar meetings. I even heard that they started groups in Berlin, Germany and Seattle, Washington.

"There are quite a lot of men who are supporting the initiative as well," she says. "I guess in the beginning, they went there just to meet some girls who were also geeks. But I heard that the second meeting in Lodz there were only men!

"Now it’s 50/50. There are also a lot of guys, but they’re as inspired with the stories as the girls, and it’s good for them to learn that women can do such amazing things."

Polygon's features team traveled to Poland in the first half of 2014. Our goal was not just to profile a single person or game. We wanted to go deeper.

Over two weeks we covered more than 300 miles. We visited some of the largest and oldest cities in Poland. We met with nearly two dozen teams, and spent time in the homes and workplaces of the individuals making games in the heartland of Central Europe.

This article is just the beginning.