Share All sharing options for: The new Doom game is just titled 'Doom,' runs on id Tech 6, and more details

The new Doom is a return to the franchise's roots, executive producer Marty Stratton revealed during the game's QuakeCon reveal event — which is why the game has officially been named, simply, Doom.

"As you've probably noticed from the teaser, the game is called Doom, not Doom 4, and not something like Enemy Territory: Doom Wars," Stratton said.

The game will launch on PCs, Xbox One and PlayStation 4, and will be running on id Tech 6 — or "id Tech 666," as the dev team calls it, Stratton joked.

The game's development, and its reveal presentation, has focused mostly on the tenets of the series' fast-paced combat. Stratton outlined the different "ingredients" that went into their favorite series installments, including a cast of over-the-top demonic enemies, huge and inventive weapons — "which you can carry all at the same time," Stratton confirmed — and quick combat, free of regenerating health.

Doom will begin outside of a UAC research facility on Mars, right at the outset of a demonic invasion. In a live gameplay demonstration, we watched a player walk through the facility, shotgun in hand. The gameplay sequence showed off brutal melee attacks and buckets of gibs — each eliciting a roar of approval from the presentation's attendees. The player also seemed to have a few mobile maneuvers, like a double jump, to help them survive waves of enemy demons and leap over large gaps.

Another segment of the demo saw the player rip the arm off of a nearby corpse, and use the appendage to activate a keypad on a locked door. The player also discovered additional weapons during the run-through, including the iconic double-barrel shotgun and rapid-fire plasma rifle.

Severed limbs were the order of the day — the player had a number of context-sensitive melee executions, allowing him to head-stomp a foe or, in a particularly brutal offing, grab a demon's arms and tear it in half. At the end of the demo, a flying demon got the best of the player, ripping his arms off and beating him to death with them. In another demo, the player ripped out a chainsaw, which allowed him to carve up demons in different directions — through the shoulder, torso or straight down the middle. Rocket launchers separated demons' top-parts from their bottom-parts.

It looked like proper, violent Doom — and was met with deafening applause from the audience with each new weapon, new execution animation and gibbing.

This reveal was first teased at E3 earlier this year, alongside a minute-long cinematic trailer. This QuakeCon reveal event was not streamed or shared with non-attendees, in effort to do "something special for the amazing QC community," according to a blog post from Bethesda Softworks. At the presentation, attendees had to check any camera equipment they had on them at the door, in an attempt to prevent any leaks from the reveal event.

Development on the next installment of Doom has been lengthy and troubled, to say the least. Doom 4 was first teased by former id Software lead developer John Carmack at QuakeCon 2007, and was properly announced as being in development in 2008. Following years of silence from id Software, which was acquired by ZeniMax Media in June 2009, Kotaku reported that the game was trapped in "development hell" following a series of huge conceptual shifts and design changes.

Pete Hines, the VP of PR and marketing for ZeniMax subsidiary Bethesda Softworks, confirmed at the time that the previous version of the project had been scrapped and rebooted.

"An earlier version of Doom 4 did not exhibit the quality and excitement that id and Bethesda intend to deliver and that Doom fans worldwide expect," said Hines. "As a result, id refocused its efforts on a new version of Doom 4 that promises to meet the very high expectations everyone has for this game and this franchise." 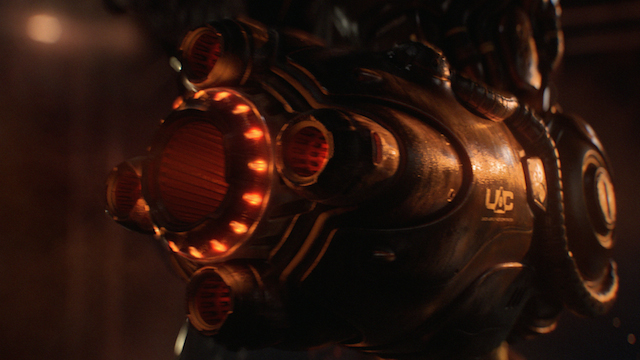