Into the Core: How QuakeCon powers the biggest LAN party in America

Share All sharing options for: Into the Core: How QuakeCon powers the biggest LAN party in America

QuakeCon's Bring Your Own Computer (BYOC) area can, at times, sound like a zoo.

As the ballroom fills out, approaching its human and technological capacity, walking the narrow pathways between the interconnected tables can be a harrowing experience. You're not in danger, of course, but the sounds of the room can be overwhelming: cries of celebration or anguish over a game of Counter-Strike, or the convention's trademark "Whoop," a high-pitched, onomatopoetic call-and-response that bounces around the room like "The Wave" at a professional sporting event.

But standing in the center of the room, atop the elevated platform called the Network Operation Center (NOC), you can hardly hear the roar of the crowd. It's a strange sensation; climbing the stairs of the NOC, just a few feet off the ground level, you experience a noticeable difference in the room's volume and temperature. It's a sensation that only the show's team of volunteer runners get to experience, though, as they're the only ones allowed to get that close to the very heart of every single game being played on the convention floor. 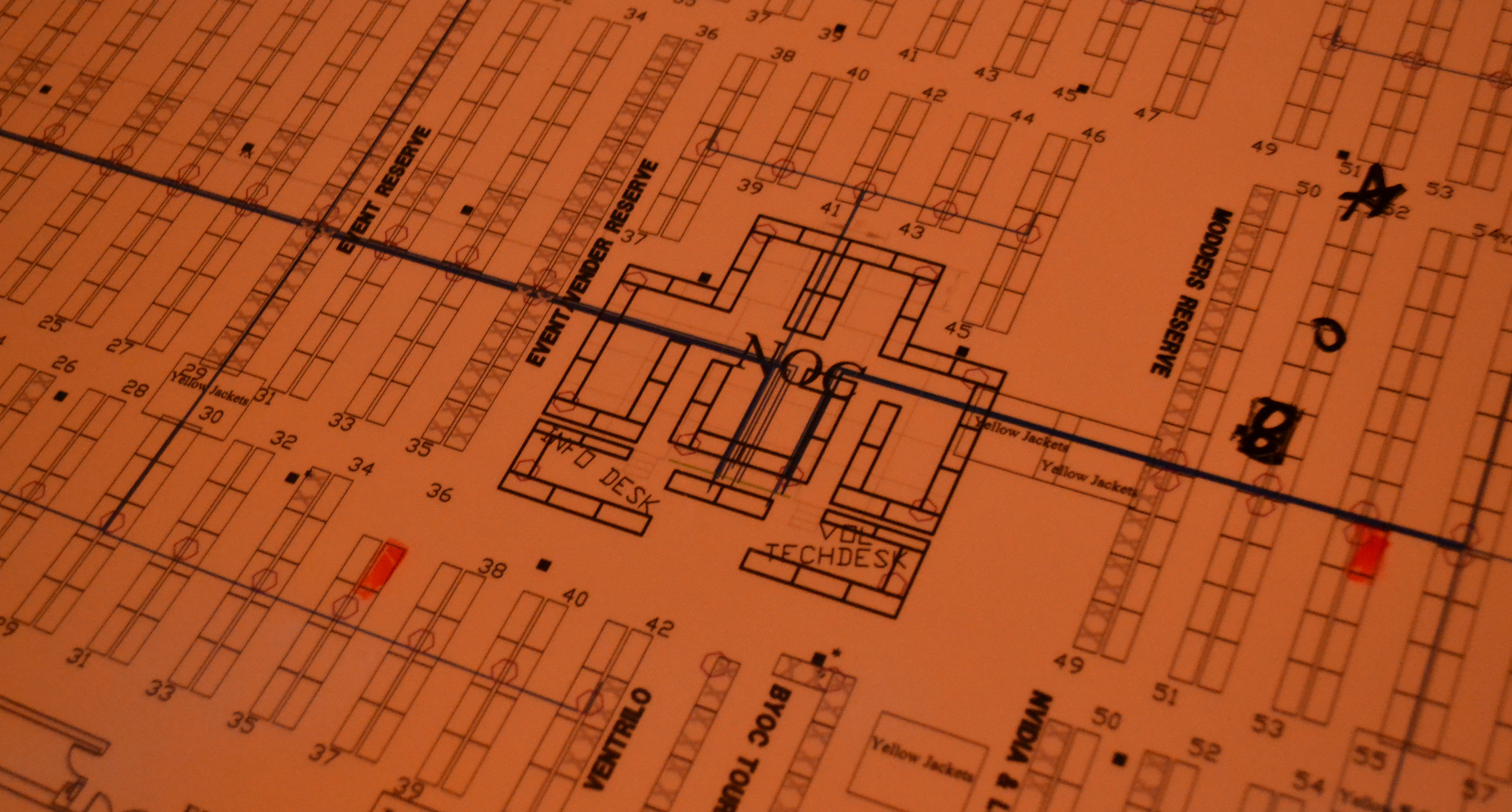 QuakeCon Event Director Michael Wolf explained the enormous undertaking that goes into putting QuakeCon's local network together. It's the biggest LAN party in the country, pulling in over 3,000 players for an annual weekend of local and online multiplayer gaming to the Hilton Anatole in Dallas, Texas. To get those players in, and to get their computers connected, requires over 6,000 hours of work from a team of hundreds of volunteers.

During the event, over 70 volunteers work full-time, managing anything from information services, logistical operations, IT support, multimedia and hardware deployment. They're all working either inside the NOC, or in rows of tables surrounding it, making the structure look less like an elevated platform, and more like a fortress.

There are over 10 miles of cables connecting the stations inside the BYOC room, as well as the convention's other areas like the tournament rooms and theater, to the NOC. A cable runs to each seat at any given table, then connects into that table's switch, of which there are 128 on the floor. The switches output into thick, bulky bundles, combining with the cables running out of their adjacent tables, with hundreds of lines converging at dozens of junction points on the floor. They all meet at the base of the NOC structure, run up a column, then are suspended in a single, hanging trough, which runs the entirety of the room's connections into a bank of 15 Dell servers; a tower that volunteers call "The Core."

The Core produces a prodigious amount of white noise, which largely drowns out the crowd noise coming from below —but it also gives volunteers and any other staff that might be on-hand a place to have conversations without attendees hearing. In the middle of what can occasionally be a deafening place, entire meetings can be held without requiring participants to scream over all the whooping. 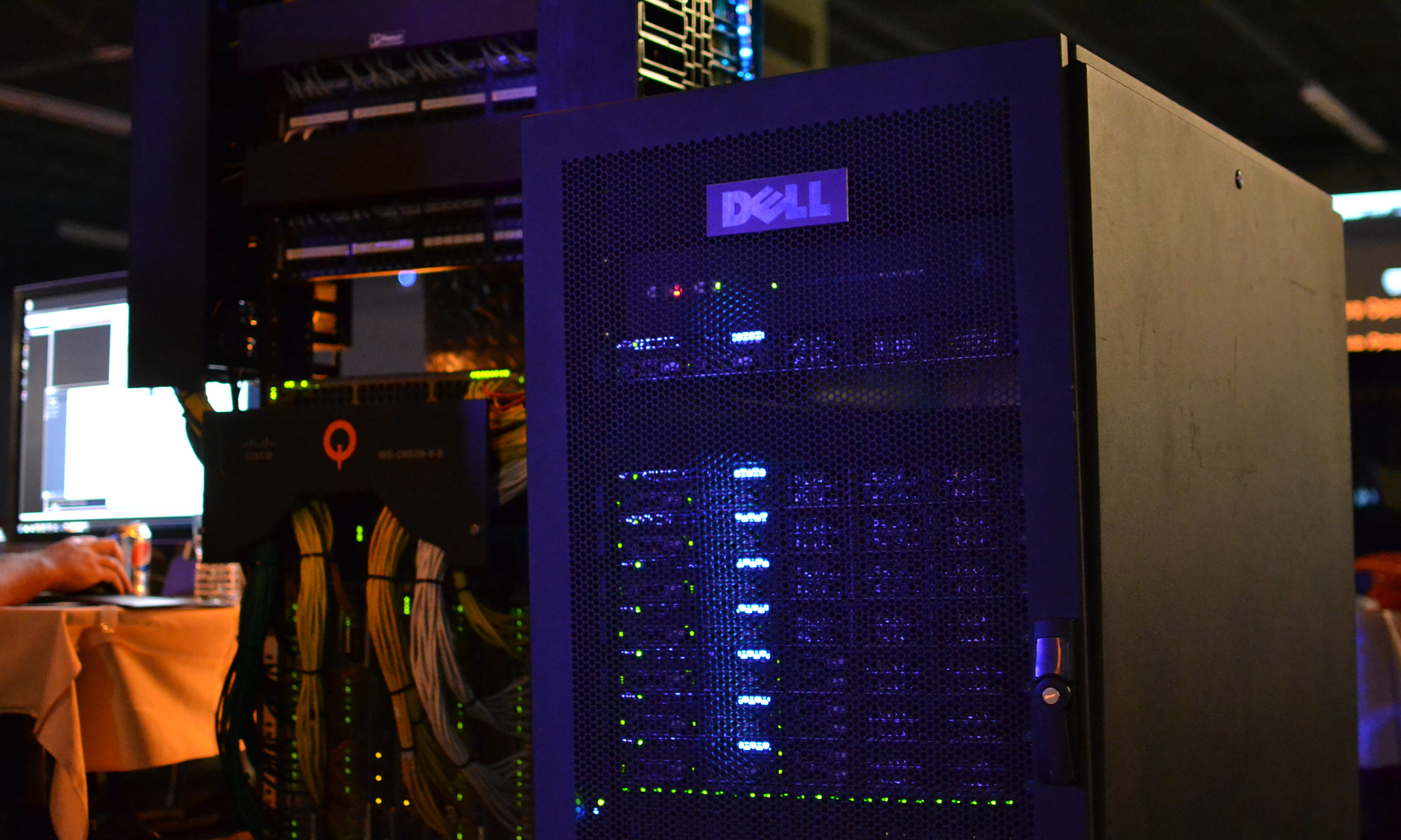 Two AT&T gigabit fiber lines give everyone in the room internet access, should they wish to take their gaming online rather than play locally. Each player is assigned a public IP, allowing the NOC to manage the online connections of every computer on the floor, enabling them to prevent any potential attacks on the system from within.

"A couple years ago, some people figured out our routing scheme, and so they tried to shut the network down using Denial of Service attacks actually inside the BYOC," Wolf said. "I don't know why — because they could, I guess? We pre-plan for all that; the [Infrastructure, Planning and Deployment team] works seven or eight months in advance to get this together."

The Infrastructure, Planning and Deployment (IPD) team is responsible for actually mapping out how the cables will run, and is assigned the daunting task of putting those cables in place. Over 400 volunteers come together, working for 36 hours to run cables to each chair, switch and junction before running it into the Core. If that sounds like a huge amount of work for the task, it's because the cables have to be cut to size in order for the system to work.

"These wires do not come crimped," Wolf said. "Every connection in this place is manually hand-crimped. Every connection has been measured, pulled apart and done by hand — all in 36 hours. It used to take us about four days."

The network is an impressive thing, having evolved year-over-year since the first QuakeCon in 1996. As networking hardware capabilities and the show's attendance numbers increased, QuakeCon's connective tissue improved in step. The data infrastructure of this year's show is a far cry from that first QuakeCon, during which attendees bootstrapped their own networking solution, much to the chagrin of the fan event's host hotel.

"It started with like, 25 people," Wolf said. "And they jacked extension cords from room to room to power the PCs. Out of the rooms, down an outdoor hallway and around. The hotel found out, and got all pissed off, and called id Software and said, ‘The hotel's mad because we're not paying for power.' And id came down with a credit card and said, ‘We'll cover it.'

"id was not technically involved with the first QuakeCon," Wolf added. "Well, I guess they were by the end of it."

They jacked extension cords from room to room to power the PCs.

Most of the volunteer senior staff have covered many QuakeCons before this year's event, organizing themselves into different units based on their respective disciplines. Long before the event starts, those units begin figuring out how many workers they'll need to cover their role in the NOC, and start reaching out to their former compatriots.

"We figure out who we want on our teams, and we start sending emails out in early January," said Dan Stima, the First Lieutenant of the IPD team. "Once we finally have a lock on an idea of how many people we're going to have, where we're going to be — as soon as that gets set, even if we don't have specifics, we're out there saying, ‘Hey, what are you doing the month of July?' Just to make sure we have our folks coming back that we've had year after year." 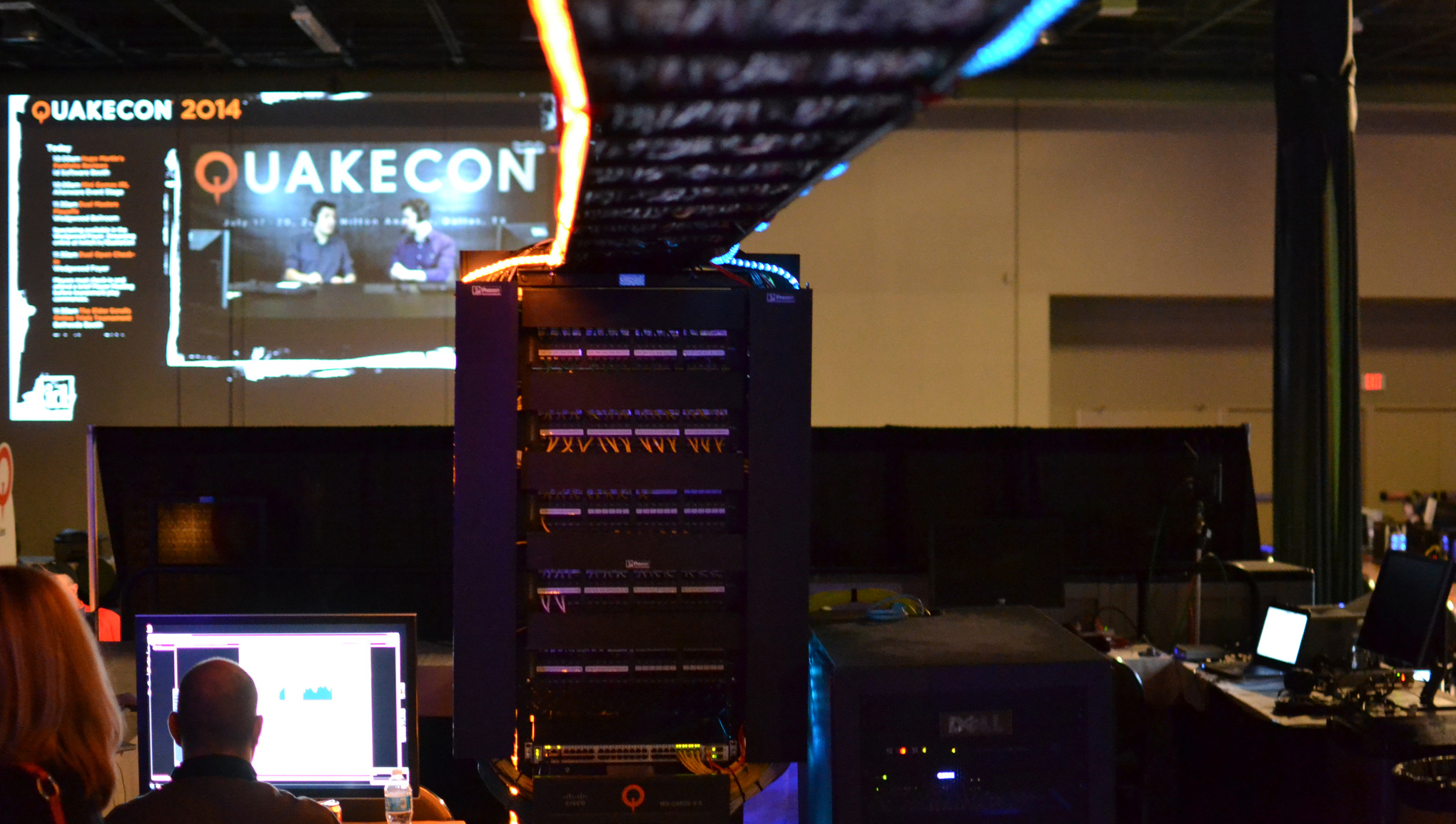 Many of those senior volunteers work the entirety of the show, either on communications, volunteer services or the actual maintenance of the network. They're on call in case of emergencies — a network failure sees the software IT team and IPD team spring into action, scrambling around the BYOC floor to find the root of whatever may have caused the disconnection. Even after the show is complete, most participate in an exhausting five-hour teardown of the cables that were cut and laid for the event.

Maintaining the brain of QuakeCon is a hard day's work — but few volunteers leave after their shifts are over.

"As people work, as they finish up their shift, they turn right around, leave the NOC, and play games," Wolf said.

Triangle Strategy got ‘fine-tuned’ based on demo feedback

Bayonetta 3 resurfaces with a gameplay trailer