Why some Magic: The Gathering fans are upset with Magic 2015

Share All sharing options for: Why some Magic: The Gathering fans are upset with Magic 2015

According to some fans, though, Magic 2015 is actually a considerable step back from previous entries in the series.

In a Reddit thread full of complaints, user "AwSunnyDeeFYeah" leads the charge, pointing to a sluggish interface, slower gameplay and a more frustrating approach to unlock new cards and decks that can make it difficult to win with your preferred style.

User "NeoFalcon2" points to microtransactions as an issue. While Magic 2015 only costs $9.99 initially, several $4.99 card packs are required if you want to expand your collection. Though many cards can be unlocked in-game, the cards in these paid packs cannot.

A few Reddit posters have popped up defending the game, claiming that many of the problems can be fixed in its menu system and praising its huge selection of cards available compared to previous Duels of the Planeswalkers releases.

"unlike the previous games, you WILL NOT have fun right off the bat."

Meanwhile, Magic 2015's Steam page is flooded with almost exclusively negative user reviews. The most recurring complaint seems to be that the game requires a lot of extensive, slow grinding to unlock cards unless you're willing to pay.

"To clear any [misunderstanding], I'm not saying the game is bad per-se," says Steam user Zanameth in a popular "thumbs down" review. "HOWEVER, and unlike the previous Magic DotP games, you WILL NOT have fun right off the bat."

Just to be sure this wasn't a handful of angry anonymous people on the internet, I spoke to some of the biggest Magic: The Gathering fans I know to get their feedback on the problems with Magic 2015.

Magic enthusiast Shivam Bhatt has been playing the card game since 1994 — just a year after it originally launched. He says he's invested thousands of dollars into the hobby. And he agrees with the many commenters on Reddit and Steam calling out Magic 2015 as a mess.

Bhatt says the initial idea for Duels of the Planeswalkers was "more of a puzzle game."

"It took away the complexity of deck building," he says. Earlier Duels of the Planeswalkers releases gave players set decks to choose between, but they could not create their own decks from scratch. "This was awesome to teach people how to play, because it took a lot of the math and complexity out and let them figure out the game from a basic level."

The problem, Bhatt says, started when veteran Magic: The Gathering players began flocking to Duels of Planeswalkers despite its status as a beginners tool. Magic publisher Wizards of the Coast has always wanted the hardcore fans to focus on Magic: The Gathering Online, a digital client that offers the complete Magic experience, including virtually every card ever made in the game's two-decade-plus history.

With the influx of long-time players hungry for a nicer-looking digital version of the game they love but one that maintained a certain level of complexity, Wizards of the Coast began receiving a flood of requests to allows players to build their own decks. That's one of the key additions to the 2015 edition of Duels of the Planeswalkers and also, it seems, one of the key sources of its problems.

Bhatt explains that Magic 2015 provides a number of prebuilt decks to start with, but you can only choose one. Once chosen you're stuck with that deck, and if you find yourself unable to win matches, you have no means of unlocking new cards without buying booster packs.

"I'm now in situations where my deck cannot win," Bhatt says, "because I don't have the cards to beat a certain enemy. Before I'd have just swapped decks. Now I'm stuck with this one."

Brian Kibler is a two-time Magic: The Gathering Pro Tour champion who runs a blog that has been highly critical of Magic: The Gathering Online. He's also the co-founder of StoneBlade Entertainment, the developer known for the creation of card game Ascension and its own digital-focused card game, Solforge.

Kibler says he had not yet played Magic 2015 but has respect for previous Duels of the Planesewalkers entries. "It's actually the main way my girlfriend initially learned to play Magic a few years ago," he says.

As someone working on a digital card game that also implements microtransactions, Kibler recognizes the difficult balance Stainless Games and Wizards of the Coast need to strike with Magic 2015. "It's especially tricky with Magic," he says, "because they have to be careful they aren't cannibalizing either their paper product or Magic Online if they offer an experience that is comparable but much cheaper."

"I'm now in situations where my deck cannot win"

Kibler cautions against pointing to the existence of a "grind" as the main problem for Magic 2015. "Sometimes when people describe things as ‘grindy' they just mean ‘takes a long time,' but I think as long as the experience you actually have while ‘grinding' is fun, that's okay. Like I used to play a lot of League of Legends, and getting more of their currency never really felt ‘grindy' because I got it from doing things I wanted to do anyway.

"It sounds like the problem might be that they're locking into a narrow game experience by only allowing you to use one deck," Kibler says. And though he's hesitant to comment on problems from a game he hasn't yet experienced himself, he's not shocked that they exist: "I can't say I'm terribly surprised by any of it, given the history of problems with Magic Online."

Kibler and Bhatt echo each other on one issue that seems to be the driving force for a lot of disappointment amongst Magic: The Gathering fans: They love the core card game and wants its digital iterations to succeed. 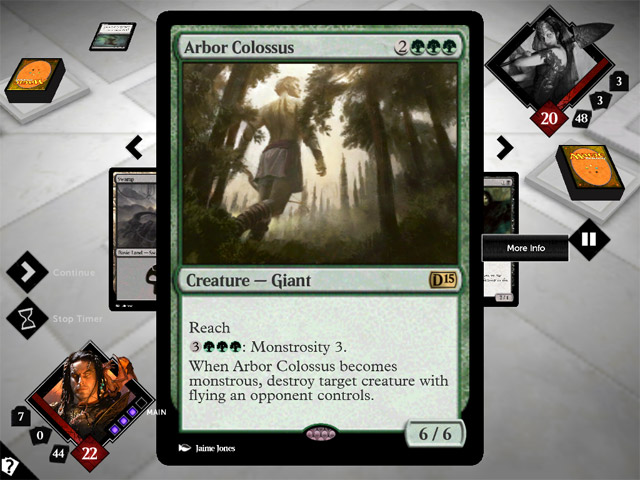 Duels of the Planeswalkers ready to pitch its Magic against Hearthstone

"I think Duels has been great for Magic already," Kibler says. "It's certainly played a part in the Magic boom of recent years, and it would be unfortunate if they faltered just as collectible games are being thrust into the spotlight thanks to Hearthstone blowing up. I love Magic — I've been playing it for over 20 years, and it's responsible for some of the most amazing opportunities I've experienced in my life — and I really hope they're able to take advantage of this opportunity."

Though he wants the same thing, Bhatt seems less hopeful: "I don't think these are issues that can be patched away. Certainly technical flaws can be fixed, and maybe expansion packs will add missing multiplayer modes back in, but the fundamental model of pay-to-play is basically baked in. It really becomes a pay-to-win game, since a deck built with premium boosters will kick the crap out of a deck built of basics."

To Bhatt, this is especially painful because he says the core, paper Magic: The Gathering game is at an all-time high. "The cards are the best they've ever been, and the game is selling the best it ever has in its 22 year history," he says. "Their digital offerings are just complete failures."

We've reached out to Wizards of the Coast and Stainless Games for comment on the reaction and will update with their response.

Polygon will have further coverage of Magic: The Gathering - Duels of the Planeswalkers 2015 in the coming weeks.