Kirby and the Rainbow Curse is fun, but does it need to be on Wii U?

Share All sharing options for: Kirby and the Rainbow Curse is fun, but does it need to be on Wii U?

Kirby and the Rainbow Curse is the follow-up to 2005's Kirby: Canvas Curse, a Nintendo DS title in which players controlled the eponymous puffy pink ball with the handheld's stylus. The sequel uses the same mechanic, but is in development at HAL Laboratory exclusively on Wii U. We had a lot of fun playing the challenging puzzle-platformer at Nintendo of America's offices in New York today, but came away wondering what Kirby and the Rainbow Curse is doing on a console rather than a handheld.

One possible explanation lies in Kirby and the Rainbow Curse's graphics. Kirby's effervescent charm was the star of the show in the warm, inviting, woolly world of Kirby's Epic Yarn on the Wii, and the same is true here, even though this game swaps out wool for clay in the environment. The material lends the game a unique, squishy texture that looks great on the Wii U GamePad as well as a TV — note that this is the first Kirby title in HD. You could describe the style as "claymation": While Kirby moves smoothly, other elements in the world, including some enemies, have the telltale herky-jerky cadence of stop-motion animation.

Kirby's Epic Yarn had a story justification for the fabric of its world, but it's unclear at this point if that's the case in Kirby and the Rainbow Curse. Explaining that the game is too early in development, a representative for Nintendo Treehouse told Polygon that she couldn't provide any information about the story. We do at least know from the announcement trailer that there will be a variety of environments, such as desert and water stages. And the game's title does suggest some kind of important narrative element: What's that Rainbow Curse about?

You'll be playing Kirby and the Rainbow Curse on the Wii U GamePad with the device's stylus. Kirby moves when you tap on him, and you draw rainbow-colored ropes of clay with the stylus to alter his direction. A meter in the top-left corner of the screen displays the amount of rope remaining, but the limit wasn't an issue, at least not in the level we played.

Even in that single stage, there was an impressive variety in the strategies required of us in order to keep moving. Early on, we were generally able to get by with short, straight lines. You don't just want to move through the level; there are stars and other trinkets to collect, of course, especially since picking up enough stars will give Kirby a powerful special move. Kirby can use that move to dash forward, barreling through enemies and other environmental obstacles, like the metal blocks surrounding collectibles. 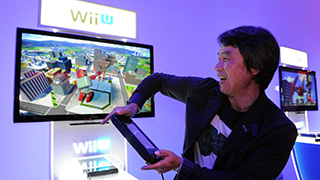 Mario's creator is fighting for the heart of the Wii U, but it might be too late

Since you have no direct control of Kirby, you have to use physics to your advantage. Inertia is a big help: When we had trouble figuring out how to get Kirby to go upward from a flat area, the Treehouse rep suggested drawing a loop. With the loop in place, we tapped on Kirby, then watched him roll around it and end up in an elevated spot.

Kirby and the Rainbow Curse becomes particularly challenging when it forces you to think quickly, and that's usually with environmental hazards like enemies, with hard-to-reach items or with the special dash. There's a wonderful fluidity that arises when you're in the zone, drawing multicolored ropes of clay all over the screen as you adapt on the fly to where Kirby is going. It's been a while since there was a difficult Kirby game, so Kirby and the Rainbow Curse could prove refreshing in that respect.

It seems odd that Kirby and the Rainbow Curse is only on Wii U, not Nintendo 3DS. While the platformer looks beautiful on a TV, the person playing it will never look at that screen; they'll keep their eyes focused completely on the GamePad, since they'll need to draw on it every few seconds.

It's possible that there's a lot going on under the hood that the 3DS couldn't handle. But there's also the chance that Nintendo is keeping Kirby and the Rainbow Curse exclusive to the Wii U in order to give potential Wii U owners another reason to buy the console. Either way, we've seen very little of Kirby and the Rainbow Curse so far, and with the title scheduled for a 2015 release, there's plenty of time for Nintendo to explain why this Kirby game needs the Wii U — and not the other way around.