Share All sharing options for: Gender hypocrisy in online games

As a boy, I'd visit my grandparents' house each summer. We'd watch epic tennis games from Wimbledon. This was the 1970s, when top tennis players were big personalities.

My grandparents were delighted by boisterous, emotionally hostile male players like John McEnroe, forever hooting at umpires and taunting opponents. In the women's tournament, they preferred mellower players like Chris Evert, over those who seemed more outwardly aggressive, like Martina Navratilova.

My grandparents' attitude was not unusual. Very few people found anything odd in this generally accepted hypocrisy. On those rare occasions when women sports professionals actually mattered (tennis, athletics, swimming), the most popularly accepted were 'lady-like,' as my Nan would say.

The world of entertainment has changed in the past 30-odd years, but people, it seems, are much the same. A recent study of first-person shooters found that aggressive male players were more likely to be accepted via in-game friend requests, than passive or friendly male players. The opposite is true for women. Women are more accepted if they demonstrate nurturing, helpful behavior. Men are top dogs, if they behave like assholes. This is hardly unique to video games.

The study did not identify the genders of the people who were accepting or ignoring those friend requests through a Call of Duty online game, but it's safe to assume that the majority were men and boys.

According to one of the researchers of the report, Jimmy Ivory at the The Gamer Lab at Virginia Tech, the study is not merely a reflection of the notorious and often aggressive sexism rampant in shooting games, but also of long-held assumptions in society as a whole. He makes the case, tentatively, that the study of behavior in online video games could serve as a catalyst for a change in attitudes.

"A lot of video game research is in a lab with questionnaires and its very artificial. We were studying people in their natural environment," he explained. "We're interested in video games but also we're interested in them as a good way to study people. These players have stereotyped expectations about the ways men and women should behave." 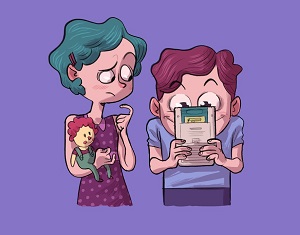 He said that it is unlikely that men are making sexist decisions because they self-identify as sexists and enjoy behaving unjustly. They may do it because they don't know any different, because they follow observed behavior patterns among their peers.

"Cultural norms have shaped how the sexes 'should' and 'should not' behave," stated the report. "People seek cues about sex to prescribe cultural norms to interactants and judge them accordingly. Traditionally, men are seen as more competent and of higher status than women, whereas women are considered lower status and thus expected to behave in a submissive manner. When women violate this expectation by interacting in an assertive or aggressive manner, the legitimacy of their behavior is questioned and they are often socially punished."

Unlike sexist decisions made in job interviews, or political polls, or by families watching sports matches, these online decisions can easily be coded and identified for what they are. There is very little noise or confusion. A company that rarely hires women to senior positions can hide behind any number of excuses. A man who only ever votes for men is never challenged. A family that roots for aggressive men and nice women in sports can always find reasons for their preferences, apparently unrelated to ingrained gender expectations.

But these studies of video games are pure and clean. If the players are confronted with the statistics, it could cause some self-examination, said Ivory.

Men are also judged according to gender expectations. "Men playing these games are expected to uphold these norms," stated the report. "Indeed, men who do not behave in a traditionally masculine manner in online games are often socially punished by being denigrated with homophobic slurs or terms implying a lack of manhood."

It is fair to say that we live in an age when gender expectations, like those demonstrated by the Call of Duty players, are being challenged more vociferously and widely than ever before. Faced with reason and evidence, there comes a time when all but the most bigoted fools (and admittedly, there are a lot of those) must ask themselves if their behavior patterns, in games or outside them, can reasonably be described as fair-minded.

Ugly facts about gender in World of Warcraft 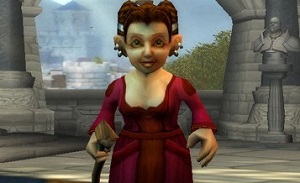 The Gamer Lab is also working on a gender study on World of Warcraft. Currently working its way through review, the new study looks at how players interact with male and female avatars of different levels of attractiveness.

The researchers found that all attractive avatars who ask for small favors from other players ('can you show me the way to X?'), tend to get a high response rate. Players who identify as male, with ugly avatars, like orcs, are also likely to receive help. But players who identify as women, but who play as 'ugly' received the least amount of help.

"More attractive avatars got more help," said Ivory. "There may be some priming cue about helping good looking people. If we implied who was behind the computer, it mattered a lot more in terms of the avatar's attractiveness. If you say you're a man and you play as a troll, no-one cares but if you play a troll as a women, some guys can't seem to get their head around that."

Video games are separate from the real world; discreet platforms on which men and women, as strangers, compete against and interact with one another just for fun. Such level platforms are surprisingly rare in the world. Online games are relatively new. Is it possible that they could also be places where the injustices of the real world might be identified, challenged and altered, especially as the diversity of people playing games (of all genres) increases? Is it possible that negative assumed behaviors, once challenged in games, might also be challenged outside games?

"I would like to believe that a lot of people who exhibited these behaviors did not even know it," said Ivory. "If they saw that pattern, it might make them introspective. Making people aware of it might make them think about it."

"Scientifically we learned more more about what they did, and less about why," added Ivory, whose co-authors of the study included Adrienne Holz Ivory, Jesse Fox and T. Franklin Waddell. "A man getting the most friends when he's rude and a woman getting the most when she is nice is very stereotypical of the way men and women act, especially in competitive settings."

The study is part of The Gamer Lab's attempts to understand how people interact with one another in games. Ivory said the team is not hostile to games, nor "apologists" for them, which are often, rightly, held up as grotesque examples of sexism in today's popular culture.

What's most interesting about this research is what it says about male and female interactions outside video games. "If you were playing soccer or basketball, is this consistent? And is it also consistent to wider society where women who are aggressive and successful are viewed pejoratively with words like 'bossy' while aggressive and assertive men are viewed as leaders?

"Unfortunately, even in this fantasy setting, if you are a woman you still have to act a certain way if you want to be accepted. It's strange that people can't even shoot each other in a game, without following gender norms."