Artist got $35K for two weeks of no work, says developer of failed Kickstarter game

Share All sharing options for: Artist got $35K for two weeks of no work, says developer of failed Kickstarter game

The developer of a video game project that raised half a million dollars over Kickstarter and collapsed without delivering it has provided a rough accounting of where the money went.

Winterkewl Games llc, said it had $415,000 to use following the 2012 Kickstarter to build Yogventures!, a game based on the popular Yogscast YouTube channel and its personalities. Roughly three-fourths of that, or $300,000 was marked for salaries for developers and artists, one of whom was paid $35,000 for two weeks that produced no work.

Kris Vale, of Winterkewl Games, said the unnamed artist accepted a $35,000 contract, then two weeks into it also accepted full-time employment with LucasArts, which was unwilling to let him moonlight for Yogventures!

"Because we had worked out a contract that guaranteed each of the principal artists a $35,000 lump sum payment, and we didn't make any clear clause on how and why someone could legally stop working on the project, the artist in question got paid, worked for about 2 weeks and then stopped working on the project," Vale wrote in an update to donors published yesterday. "We had no way to force that person to pay back any of the funds and it was a bitter lesson to learn."

Following that blunder, Vale says Lewis Brindley, one of the two Yogscast founders, "lost faith right away in my ability to run the company from a business standpoint." Brindley, Vale said, then demanded that "all the rest of the Kickstarter money that hadn't been spent be transferred to them right away." That amounted to about $150,000. Vale said Yogscast was supposed to use the money to create and ship the physical rewards promised to donors, and then hire, at $100,000, the lead programmer the project still lacked. 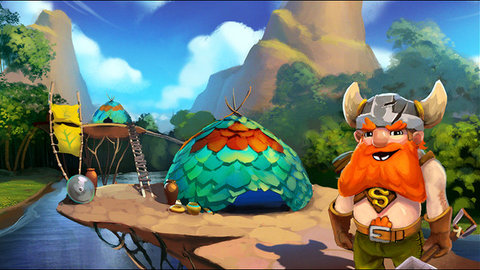 That person apparently was never hired. "We began developing in earnest but without our main programmer and no funds to hire one it became clear that more of that role was going to be filled by me than I ever intended," Vale said. He says he "worked tirelessly for the next 18 months," and the project didn't lose another person, but "too many design changes and my in-experience as a project lead and programmer were what's to blame for our company never really making what it was we set out to make."

Polygon has reached out to Yogscast for comment about Vale's version of events, and what the $100,000 was spent on if not the salary for a lead programmer. In a comment published to the Yogscast subreddit, Brindley said "We're not ready to make a detailed statement about what happened with Yogventures!. Winterkewl's statement omits much and I would disagree with a number of points, but there's no value in going into detail." He added that "Any monies the Yogscast have received in connection with this project has been spent on this project."

Yogventures! was to have been a sandbox adventure game. Last week Brindley delivered an email to donors confirming that work had stopped on it. Yogscast general manager Rich Keith later told Polygon that "the project was too vast in scope to be realized and despite a huge amount of hard work from Winterkewl they have had to abandon it."

Brindley's email to donors noted that "we're under no obligation to do anything," though promised that "we're going to do our best to make this right." The wording outraged many among the Yogventures! donor community, who were given a Steam Early Access key for another game as a make-good. Brindley later said all donors should have received any physical rewards they were due.

No refunds are to be given, with Yogscast referring those requests to Winterkewl Games, which Vale said is now bankrupt. Kickstarter, which collected $28,383.25 (5 percent of the total raised) from the Yogventures! project, does not offer refunds. Its terms of use require creators to fulfill the rewards offered for donating, or give refunds for them. Brindley says donors should have received their rewards by now and if not, to contact the Yogscast.

This was the budgetary breakdown Vale offered in the farewell post on Yogventures! Kickstarter page.