Today is the 10th anniversary of the launch of NFL 2K5 — more formally, ESPN NFL 2K5. Killed by the infamous exclusive video game license the NFL would sell to EA Sports five months later, few other games — in any genre —have remained a constant part of modern conversation despite not publishing in a decade, and with no sign ever of returning.

NFL 2K5 was an outstanding damn-the-torpedoes effort by Visual Concepts and then-publisher Sega, beating Madden NFL 2005 to shelves by three weeks, and at less than half the price. It's difficult for any 10-year old game from two console generations ago to remain timeless, and played today NFL 2K5 does show its age. Yet it is an undeniably advanced sports simulation for its time, showing an aptitude for American football gameplay features that its rival has taken years to refine.

On the field, NFL 2K5's biggest virtue was in the running game — no small advantage at a time when developers struggled to implement sensible blocking animations or give runners a chance to run after contact instead of ending the play. NFL 2K5 implemented more sophisticated animations, and more of them, to create a smoothly determinative running game. Running backs featured the usual loadout of spins, jukes and stiff-arms, but also would do contextual things — such as turn sideways to squirt through blockers — that were extremely farsighted for their time.

Another fondly remembered aspect of the game was the Crib, which vaguely foreshadowed the interest Visual Concepts' has in presenting the lifestyle of professional athletes, and does so well in the NBA 2K series. Players customized an apartment with swag, goodies and even games like darts or shuffleboard, and would be challenged to competitions by half a dozen celebrities who lent their names to the title The Crib is regularly brought up when NFL 2K5 fans wax nostalgic.

It was not a perfect game. None ever is, especially if it's published every year. Some of its lionized qualities seem not to deserve the nostalgia, however. Few mention that the game employed fictitious announcers, something a series — much less its competition — could not possibly get away with today, especially with the ESPN branding. 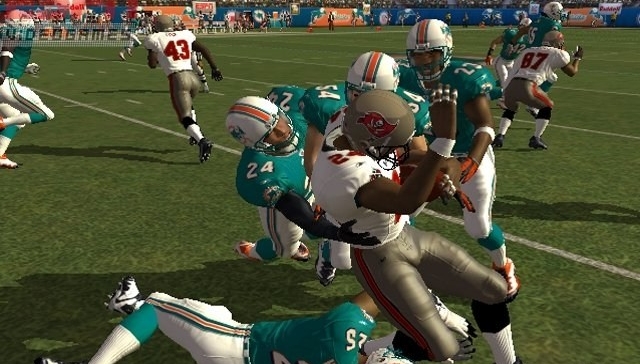 The First-Person Football mode is commonly cited as a bold experiment, and challengers like 2010's Backbreaker emulated it to a degree (and Madden NFL 15 will introduce a third-person camera for defensive players to improve gameplay there). But any honest person will admit to not knowing what the hell they were doing in it in NFL 2K5. ESPN's Chris Berman, despised as a blowhard in real life, is in NFL 2K5 the venerated host of a halftime show that only recaps one game: yours. That said, this year Madden will introduce a halftime package with — lo and behold — a highlight reel and commentary.

Few also seem to recognize the reality behind NFL 2K's demise. It was sold at a bargain bin price from the start — $19.99 — and while that certainly made the game the people's champion, it did Sega no favors with a league that views itself as a global luxury brand. Sega seemed also not to understand the gravity of the NFL's move toward licensing only a single partner per product. Pacts for credit cards, sports drinks and snack foods had been signed in the run-up to this deal. Electronic Arts did see the league's intent, and lobbied it in that direction aggressively. It could also be that Sega (which jointly published NFL 2K with Take-Two) knew what was coming, was unwilling to pay the freight, and simply had a final blowout before turning out the lights.

In January 2005, Electronic Arts and the NFL (and NFL Players Association) reached an exclusive pact that would come to define sports video games throughout the entirety of the last console generation, and into this one, too. Going forward, Madden NFL would be the only console video game with the NFL's teams, emblems, uniforms, stadia and players. Sega rid itself of its sports division, created to support the Dreamcast, and sold it all to Take-Two Interactive, who made an aggressive bet on the come: A semi-exclusive pact with Major League Baseball that took EA Sports' beloved MVP Baseball series out of action after 2005. Begun, the exclusive wars had.

Though Madden has been frequently — and many times deservedly — assailed for scatterbrained development over the past 10 years, it fared much better than Take-Two did with the MLB license, both critically and commercially. Take-Two ultimately jettisoned the leadership that bought Visual Concepts and created the MLB deal — estimates at the time pegged it at nearly a quarter of a billion dollars, $200 million for the MLB agreement, and $24 million to buy Visual Concepts. It continued to lose money — estimates as large as $30 million annually — on 2K's rebound hookup after being jilted by the NFL.

There is little sign the current management of Take-Two Interactive has any appetite for an expensive licensed property. It picked up the WWE license only because THQ went bust and the wrestling promotion was desperate for a partner. It recycled MLB 2K12 into MLB 2K13 simply because baseball had no other option on the Xbox 360 that year. It was the only profitable edition of that game, and none was published this year. The world-class NBA 2K series made the 2K Sports division profitable for years despite the white elephant MLB 2K represented, as well as the dead weight of the NHL and College Hoops series, and all of the spinoffs that never sold enough.

Yet people still hold out hope that NFL 2K will return. Madden's creative director, Rex Dickson, got in a lot of trouble at E3 for throwing down the gauntlet, challenging 2K to buy a license and create a competitor, even though that is impossible under the terms of the contract his own company signed. Some felt he was big-timing a powerless constituency. But Dickson's comments (provoked as they were) also speak to the frustration of EA Tiburon's developers, who for 10 years have been haunted by NFL 2K5 — in forums, in comments, in social media — that nothing they do could be as good as something that by now really isn't a video game, but a mythological ideal that grows more romantic with every year.

NFL 2K5 is sports video gaming's King Arthur, eternally populist, noble and heroic, champion of an age long ago enough to make its triumphs soar and its shortcomings recede to nothingness. Partial-blood descendants like All-Pro Football 2K8 give the masses hope that some secret plan exists in Novato, California, where, if the NFL opens the ball, Visual Concepts is ready to dance. With the debut of the new console generation, though, and all of the time and money it would take to render 32 NFL stadia and thousands of players for it, that seems unlikely.

As a symbol, NFL 2K5 cannot have it both ways. It cannot be both the martyr and the backup in waiting. Heroes are carried on their shield; they don't carry clipboards, standing on the sideline as younger, faster and better-looking performers take the field for 10 straight years. So let's venerate NFL 2K5 for what it did do memorably in its times: Taking the handoff, getting skinny between the tackles, pushing off and bursting through, legs churning, driving hard to daylight. The feats that thrilled us then, the things we would take for granted today.