Mighty No. 9: The Animated Series will give Inafune's excitable robot more time to shine

Share All sharing options for: Mighty No. 9: The Animated Series will give Inafune's excitable robot more time to shine

In February, Keiji Inafune told us that he was interested in seeing a cartoon made for his new game, Mighty No. 9.

Now, less than 10 months after the game was successfully funded through Kickstarter, racking up more than four times its crowdfunding goal, that interest is going to be a reality.

Earlier this month, alongside the announcement of a second funding campaign to bring English voice acting to Mighty No. 9, developer Comcept revealed that the Blue Bomber's baby cousin would be getting his own cartoon series. In development with Tokyo-based company Digital Frontier, Mighty No. 9: The Animated Series is currently looking at a 2016 release date.

According to Emmanuel Osei-Kuffour, one of the Mighty No. 9 project leads at Digital Frontier, the company approached Comcept last December about creating a cartoon shortly after the Kickstart campaign's success. Like children discovering popular video game characters from Saturday morning cartoons — Sonic the Hedgehog, for example — Digital Frontier is hoping to leverage the Mighty No. 9 animation to bring younger gamers into Beck's world.

"We at Digital Frontier actually had the idea for the cartoon," he said. "We figured that it'd be great if somehow, the game and the cartoon could have some sort of synergetic relationship the way Pokémon does. It also takes a long time to develop an animated series, so if we didn't start on it last year, chances are it would take even longer than now to actually see it on air."

Nick Yu, a producer at Comcept, confirmed that Digital Frontier was forward in their desire to make a Mighty No. 9 cartoon and approached the game developer first. Inafune was always keen on expanding the game's universe into other media, he said, and shortly after the crowdfunding campaign wrapped up the offers began pouring in. Multiple companies pitched Comcept on anime projects, but in the end they chose Digital Frontier. 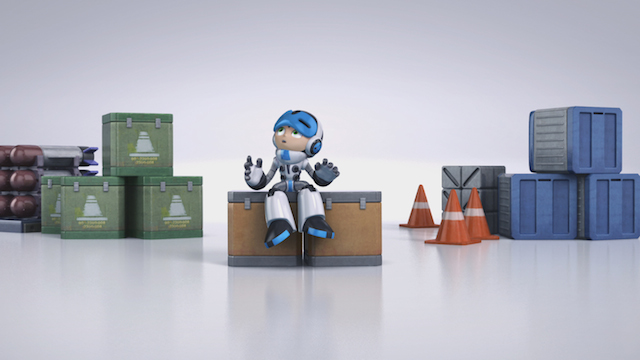 "We choose Digital Frontier because they had the most solid ideas of what they wanted to do on the project, not only from the creative side, but also the business side to make the project into reality," Yu explained. "Having their own human resources to make the series was also a big plus. More than anything, Inafune really felt their passion for the project when he first met them."

With Inafune's blessing, Digital Frontier began work on the animated series earlier this year. While Comcept isn't directly involved in the cartoon's production, the two companies meet regularly to make sure both works are on the same page. Comcept regularly passes along updates on the Mighty No. 9 storyline and Digital Frontier in turn shares how they incorporate these details into the cartoon. Writing a cartoon from scratch based on a game that hasn't even been made yet necessitates this constant communication, despite Digital Frontier managing almost all of its development.

"It's definitely a challenge, since we can't sit down with the final product to make sure that the tone and feel of the animated series matches the game," said Osei-Kuffour. "As an avid game fan myself, I always get frustrated when film or TV adaptations completely miss the mark of the original game. We are always trying our very best to match the tone of the Mighty No. 9 world and ultimately our decisions will go to Inafune-san for his final approval."

But working solely on the cartoon has its advantages: Digital Frontier has a chance to flesh out Beck and company in ways the game can't.

"That being said, there are parts of the Mighty No.9 universe that simply can't be explored in the game," he went on. "For instance, what does Beck do outside of his battles? How does he feel about the pressure on him to be the hero? What mistakes has he made as the hero? With this cartoon, we are trying to add to the Mighty No. 9 universe by filling in the parts gamers can't see in the game."

As it stands right now, Mighty No. 9: The Animated Series will not follow the game's plot to a letter: Rather, it will adapt it to incorporate elements that make it comfortable for an episodic show. Some of the main cast's character traits have been "revisited," Osei-Kuffour explained, in order to allow for more interesting, varied stories. The "essence" of each character will be close to that of their game counterpart, but the cartoon gives companions — like Beck's assistant, Call — their own time to shine.

The robotic girl, who has "no emotion at all," will constantly and playfully clash with Beck, who feels human emotions and is very excitable. The cartoon will further explore their relationship, as well as how the pair get along with two other game characters, Dr. White (creator of the Mighty Numbers robots) and Dr. Sanda (the man who runs the company White works for).

Beck is so excitable, in fact, that much of the cartoon will be focused on him learning to manage his emotions and function as a Mighty Number. The initially-reluctant hero doesn't want to save the world and his "human heart" makes him an anxious combatant and a clumsy fighter. This is the Beck that Comcept has created for the game, and the Beck that Digital Frontier is determined to flesh out in all directions with the cartoon. In general, viewers can expect an action-packed show that hopes to glean laughs from both children and adults. It bears Inafune's stamp of approval as well as a ton of wiggle room for players to get to know the characters on a deeper level. 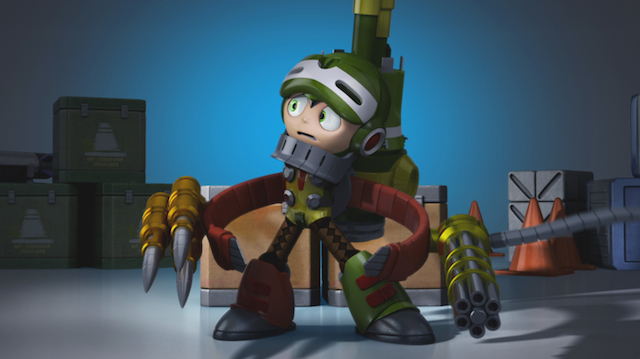 This isn't Digital Frontier's first rodeo working with licensed properties, either. The company was responsible for the 2006 live action Death Note movies, as well as animated films Appleseed, Resident Evil: Degeneration and Resident Evil: Damnation, and Tekken: Blood Vengeance. Osei-Kuffour explained that while these were developed predominantly for a Japanese audience, Mighty No. 9 is the company's first major challenge creating something that it hopes will resonate with viewers — especially children — worldwide.

"We're aiming for a show that resonates with people of any country the way a Pixar film does, so that's the main challenge for us with this project," he explained. "We'd love to see Mighty No. 9 enter the hearts of not only fans [ages] 25-34 but also the younger generation as well. That's why we took it on.

"Since Inafune-san is in Japan, why not have a Japanese company take on the cartoon?" he added. "Typically, animation companies in Japan make shows for the domestic market, but with the appeal that Inafune-san has at home and internationally we felt it was a great opportunity for us to aim for a worldwide market."