Dark Souls 2: Crown of the Sunken King blends the old, the new and the even newer to form a mixture that fits perfectly alongside the levels that made the core game so damned good.

The first of three downloadable content packs for From Software's action role-playing game grounds players in history by paying homage to the intertwined level design of its forebears. Crown of the Sunken King revisits the past but retains the refined play style of the sequel; it feels about as comfortable as a Souls game can alongside a level of challenge you can't get anywhere else. Most importantly, it introduces a new, puzzle-based exploration formula with great success.

Crown of the Sunken King is an indispensable expansion to the Souls franchise. And despite some problems balancing difficulty, it contains my favorite areas in Dark Souls 2.

Crown of the Sunken King is an indispensable expansion

Crown of the Sunken King's first and best twist appears early. Scattered among the subterranean pyramids of Sanctum City — think of a less deteriorated version of the Mines of Moria from The Fellowship of the Ring — are triangular switches. Hit them with your weapon, and they cause shifts in the architecture and geography nearby.

Crown of the Sunken King doesn't simply present you landscapes. It requires you to conjure the land where none appears to exist. Temple-like structures rise from the ground, revealing hordes of enemies that were hidden. Giant stone ledges creek and extend from the outside of buildings, creating pathways to distant objects. Dark Souls has always been a series about contemplation — Which way should I go? What's the best, most efficient way to eliminate that group of enemies? — but Crown of the Sunken King extends that formula to the very land itself, forcing you to stop, think and experiment with the best ways to get where you need to go. 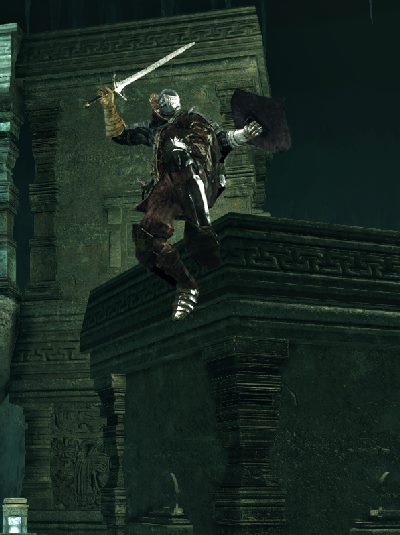 The DLC's new landscape isn't just a superficial layer retrofitted on top of an old formula. It has a purpose. Crown of the Sunken King is stocked with collectibles, and the only way to find many of them is to repurpose those switches and structures. A notable example appears toward the beginning of the DLC. A corpse leaned over the edge of a structure holding a treasure, with no indication of how I could reach it. After several minutes of searching, I realized I needed to lower the adjacent platform and leap from its top to collect my reward. Crown of the Sunken King twists even its twists — leaving it to the player to work out how to progress.

Players will also have to spend a lot more time thinking about the general layout of levels compared to the core game. The ability to warp between bonfires from the very beginning of Dark Souls 2 stands in contrast with the original Dark Souls. This decision had two major consequences: It all but eliminated mandatory backtracking, and it also eliminated the impetus to connect levels in an often surprising rat's nest of tunnels. The sequel has no equivalent to the first Dark Souls' delightfully interconnected levels.

Crown of the Sunken King corrects the oversight. From Software uses its standalone nature to return to that interconnected architecture that so many fell in love with. There's nothing quite as gratifying as when I stepped off an elevator prepared for the worst, certain that every step was taking me closer to danger, only to realize that I had discovered a shortcut to a bonfire I lit hours earlier.

Whatever the world design, all of From Software's Souls games are tied together by the combat. Here combat is mostly — but not entirely — fair. Given enough time and planning, even the toughest enemies present weaknesses to exploit. The boss fights are notable exceptions. The first boss encounter is actually three bosses in one, and I don't think I could have overcome the simultaneous pummeling without summoning other players. Likewise, a hex-wielding sorceress is so over-the-top difficult that, despite many attempts, I haven't been able to crack her code.

The brutal Dark Souls formula — where punishment is absolved by the ever-present belief that, with enough patience, you can overcome — shows some cracks in that second encounter. I burned through my human effigies in order to summon NPC partners, but they died before the sorceress' life was half-depleted. She could spawn enemies at will and drain nearly half of my character's health with a single swipe of her catalyst. It disrupted the confidence in progress that makes Dark Souls' patented brutality bearable.

Aside from a few frustrations, Crown of the Sunken King is Dark Souls at its best

Even when it's frustrating, Dark Souls 2: Crown of the Sunken King balances out its rough patches with a sense of unbridled satisfaction. It's a perfect example of the interplay between tension and relief that the Souls series has become famous for. Crown of the Sunken King may be an optional expansion, but it transcends its own status. It ranks among the best Souls levels I've ever played — and damn near beaten.