Everyone you know and love will one day die. It's true for all of us, but Telltale's Walking Dead series — now nearing the end of its second season — has always done an especially powerful job of putting mortality at the forefront.

In "Amid the Ruins," Season 2's fourth episode, that tension at the heart of the series is as loud and clear as it's ever been. Every moment of hope is contrasted by a devastating setback. Longtime companions fall before the episode is done, and protagonist Clementine finds herself in increasingly dire situations.

This formula has done Telltale well in the past, but something is off in "Amid the Ruins." The normally brilliant characterization and writing of the series is less consistent. The plodding arc of the episode feels as exhausted and hopeless as the ragged band of main characters. Even compared to Season 2's weak start, this episode stands alone as a tired, disappointing stumble for The Walking Dead.

(Editor's Note: If you haven't played any of The Walking Dead Season 2 and are concerned about spoilers about the direction of this season, it may be best to avoid this review for now. No major surprises or plot elements from this latest episode are revealed.)

The Walking Dead Season 2: Episode 4 begins immediately where last episode left off — with Clementine's group in a panicked escape from a hellish walled-off community where they were held hostage. Last episode ended with an intense, horrifying decision, and you see the repercussions of your choice immediately upon loading up "Amid the Ruins."

This starting scenario is the most interesting part of the episode and shapes the core drama of the next few hours — namely, Clementine's relationship with beleaguered Season 1 survivor Kenny. He's been around Clem nearly as long as those of us who have played the series from the beginning; he's witnessed her growing and changing in the exact ways we have. Watching his responses to that and navigating the ups and downs of their evolving relationship is fantastic and makes it clear why Kenny's surprise appearance in Episode 2 was so necessary to the season as a whole.

The gravitas of the handful of scenes between Clem and Kenny leaves the rest of the cast floundering by comparison. While Telltale presents with some difficult decisions to make regarding Sarah, Jane, Luke and others, their relatively flat personalities made it hard for me to feel as invested.

It gets even worse when the characters refuse to stay true to how they've been written previously in the season. Luke was arguably one of the most fleshed out newcomers to the cast this season, but in "Amid the Ruins" he makes a number of strange choices and develops an attitude that doesn't seem consistent with how he was presented up to this point.

It's not just the character writing that feels off target. Everything in "Amid the Ruins" builds to a major event that's been hinted at since the start of the season. It's a huge moment for the group as a whole, but as with all of the changes to the status quo this episode — the character deaths, introductions, etc. — this milestone has no sense of weight attached to it. It's glossed over, like everything else, with characters moving on quickly, seemingly unaffected. 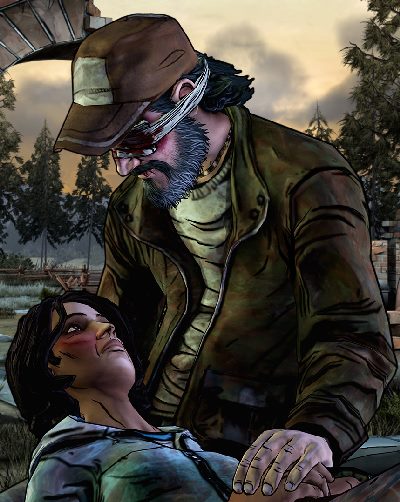 If the other characters can't be bothered to show emotion when a character they've been traveling with for weeks is set upon by a horde of the undead, why should I care? I'm not sure if The Walking Dead Season 2 has become too comfortable in its post-apocalyptic despair or if the writers at Telltale just had an off month in their ambitious schedule of episodic releases.

Whatever the reason, "Amid the Ruins" was a major step back from the series' normally high standards. I can only hope Telltale shakes off the rust for a stunning conclusion to the second season, but it has a long way to go.