No skin thick enough: The daily harassment of women in the game industry

Share All sharing options for: No skin thick enough: The daily harassment of women in the game industry 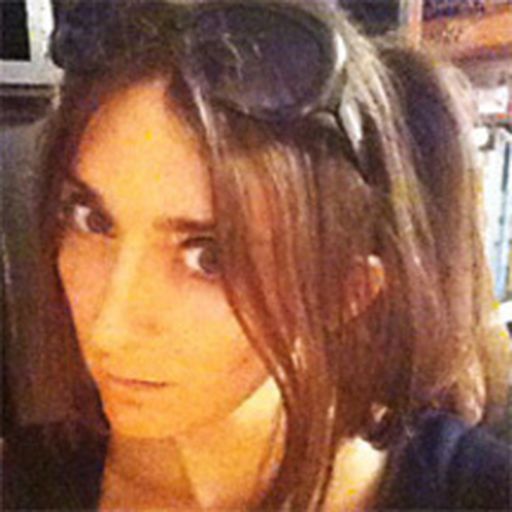 "Women are the niggers of gender," the email said. "If you killed yourself, I wouldn’t even fuck the corpse."

I blinked at my phone, fighting simultaneous urges to hurl my phone across the room in anger and cry. Later that day, someone texted me my address — telling me they’d "See me when I least expected it."

I haven’t been out to my car at night by myself since January 2nd.

My name is Brianna Wu. I lead a development studio that makes games. Sometimes, I write about issues in the games industry that relate to the equality of women. My reward is that I regularly have men threatening to rape and commit acts of violence against me.

If you are a woman working in the games industry, especially in a public way, you’re going to experience harassment. I imagine telling my 12-year-old self that fulfilling my dream of making games would lead to constant threats. Would she still do it? Would any woman?

The problem with sharing these stories in broad terms is that people think men and women receive the same harassment online. They do not.  I’m not writing this piece to evoke your sympathy. I’m writing to share with you what prominent, successful women in the industry experience, in their own words.

The Myth: Everyone in the games industry experiences harassment. Women are just too sensitive about it.

The Reality: If you are a woman in the industry with a critical opinion, you will get a disproportional amount of criticism, hostility, and scrutiny compared to men.

"Anita Sarkeesian once reblogged a Tumblr post of mine and it ended up on Reddit. I got so much hate mail from dudes that I left the internet for three days," Nina said.

"They filled my Tumblr mailbox with the usual anon posts like, ‘Die, you fucking cunt!’ And, ‘You'll know when I rape your mouth hole, bitch!’ When I turned off anonymous messages, they made new Tumblr accounts and continued to spam me. Later, they discovered the link to my personal webpage and sent hate mail through there. I still get an occasional random hate message through my website."

Conclusion: I’ve personally never heard of a man in the games industry getting rape threats for having an opinion.

A male friend of mine that develops AAA games told me, "When a woman criticizes me, it goes to a different part of my brain than when a man on my team does. I get defensive really quickly. I’m trying to get better about it." I don’t think his is a unique experience.

We live in a society that’s sexist in ways it doesn’t understand. One of the consequences is that men are extremely sensitive to being criticized by women. I think it threatens them in a very primal way, and male privilege makes them feel free to lash out.

This is why women are socialized to carefully dance around these issues, disagreeing with men in an extremely gentle manner.  Not because women are nicer creatures than men. But because our very survival can depend on it.

The Myth: Women in the games industry get special treatment for being women, and your life can be made easier by your looks

The Reality: Many men believe women have no worth in the games industry beyond appearance. This means that an incredible amount of conversation focuses on sexual attractiveness, or appearance in general.

Nicole’s Experience: Nicole Tanner is a former editor of IGN, and was one of the founders of "Girlfight." I talked to her recently about the harassment she received while running this groundbreaking all-woman podcast.

"If you want examples of self-esteem destroying comments, search for the PAX Girlfight panel on YouTube. At IGN, I’d simply ignore the comments because they were so bad. And that's sad, because I'm sure I missed out on some thoughtful discussion, but wading through the insults to get to the few good comments wasn't worth it."

A look at the YouTube comments for her 2010 PAX East panel is stomach-churning. A shocking number of them personally attack the women of Girlfight.

"I thought they would put some fucking hot girls up there to fucking look at. AM I RIGHT?"

"Wow, now I realize why Jess is the only chick working in IGN that gets featured in videos."

Conclusion: The video game industry is particularly egregious at only representing women as sex objects. As such, many gamers are trained to only see women in that context.

When I’ve been attacked over my looks, it’s hurt me very deeply. I am an engineer and a head of development for my company. My value to the industry is leading my team to make games, but that very basic reality is no defense against constant commentary on how I look. This constant stream of comments and insults aimed at your body, face, and presentation is inescapable, and rarely happens to men on the same level.

The Myth: Women should just laugh off online harassment and not take it personally.

The Reality: This kind of harassment leaves long-lasting damage. It affects our friendships, and can cause us to be distant from others.

Elise’s Experience: "I have a guy who’s writing fan fiction starring me and him. It’s a pornographic fanfic, and he's on chapter 6. He anonymously submits chapters through my website with no identifying info or explanation. I just save them in a folder in case the guy turns out to be a stalker. But it's creepy and gross. I feel violated.

"But, the worst part is not knowing who the guy is. Is it someone I talk to on Twitter? Someone who emails me for advice? I could be interacting with this guy all the time and not know it. Everyone's a suspect.

"Every time I'm interacting with an enthusiastic fan, I’m wondering in the back of my mind, ‘Is it you? Are you doing this to me?’ And then I feel uncomfortable with the interaction. It taints any sense of ease or honest connection."

Conclusion: Paste Games editor Maddy Myers once told me, "You don’t really recover from this kind of abuse. You just change." She’s right.

Often, I’ll see people lashing out at women they perceive as too bitchy or too confrontational. They don’t understand that we are the sum of our experiences. The toxic environment causes us to change.

If people attack you online, you’re going to get defensive quickly. If people sexually harass you, you’re going to grow more inward, and more protective. It’s a very human reaction, and there is no way to face this daily reality without it changing who you are.

Women in the industry are told by men what is valid for us to feel. The conversations tend not to recognize the reality of the situation, and the very real threats that can occur at gaming events or in our day-to-day lives. We’re told it doesn’t matter, to grow a thicker skin, and that men go through the same thing.

I have yet to talk to a man who has had to call a police officer due to a stalker, only to be told nothing can be done until they are physically assaulted. It’s hard to explain what it’s like to be at a gaming event, cornered by someone who claims to be a fan, and to be physically kept from leaving by someone holding you in place or putting their body between you and the exit.

I didn’t understand this until I read Leigh Alexander’s excellent piece, "But what can be done: Dos and Don’ts To Combat Online Sexism." One quote was so great, I made an inspirational poster out of it. 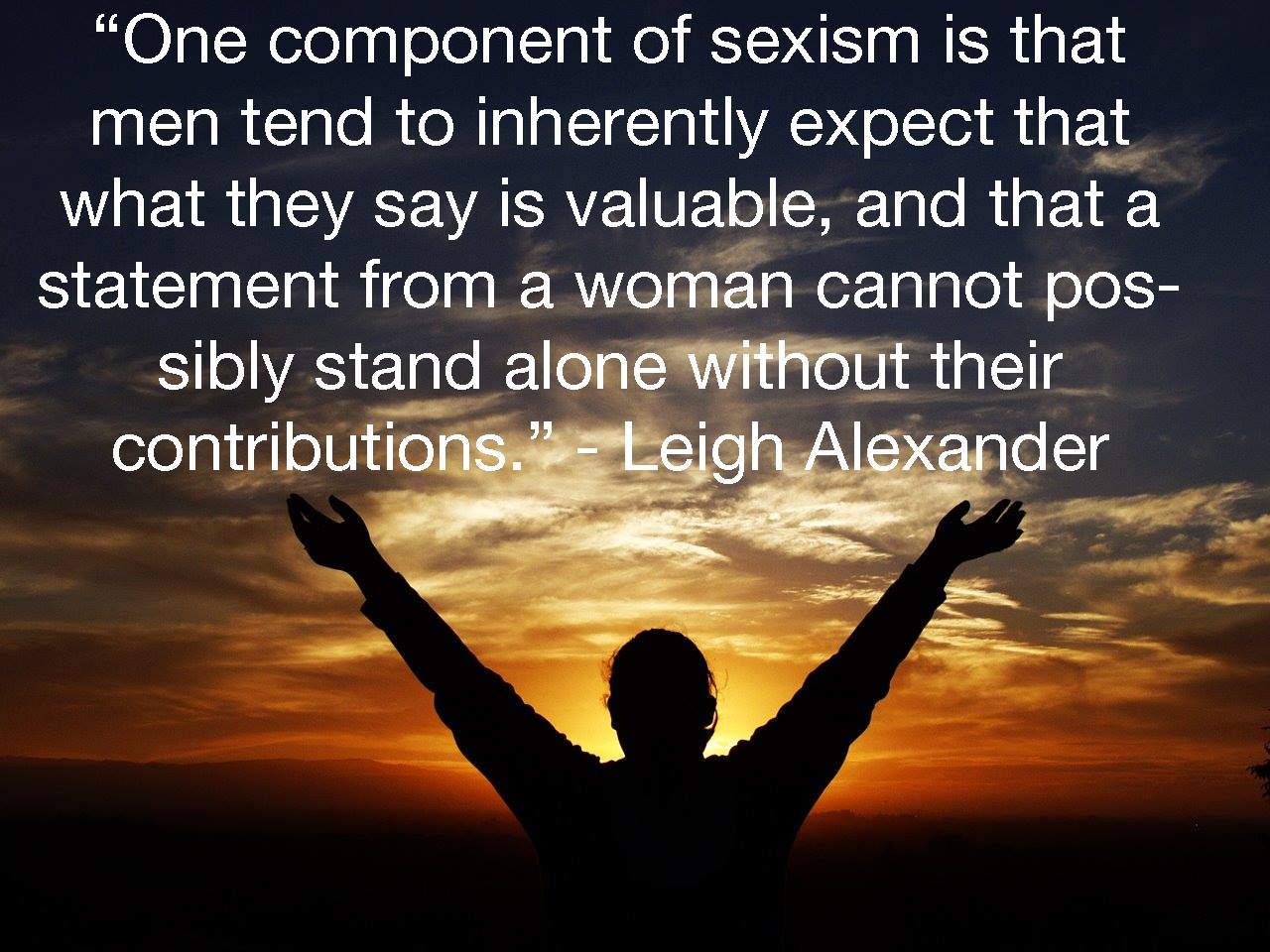 Things aren’t getting better for women on the Internet; they’re deteriorating

It’s telling that men in the gaming industry, or simply commentators, refuse to listen to the reality of these situations and try to help. They’d rather talk over women and convince themselves of a fictional reality that’s more comforting.

Writer Samantha Allen talked about this in a recent story about her own experiences and those of other women she knows.

"In the wake of VidCon, and as more and more women start speaking up about the harassment they face online, it’s time to start realizing that our narrative of progress is deeply flawed. Things aren’t getting better for women on the Internet; they’re deteriorating and ignoring the problem amounts to being complicit in it," she wrote.

Writer Laurie Penny has also written about ongoing, organized harassment and smear campaigns. "This has become a normal part of my life as a person who dares to write in public whilst being both female and left-wing, but this weekend it’s been particularly full on," she stated. "Rape fantasies and pictures of dead children were coming faster than I could block individual users. In the end I had to step away from the internet, which was a pain because I need the internet to work."

The Myth: The game industry is a field men are drawn to more than women.

The Reality: Women are here, we love games, and we’re not going anywhere.

Carolyn’s Experience: Carolyn Petit is an editor for GameSpot. She shared her story of learning to deal with online harassment with me.

"It’s been a constant part of my experience ever since I began working at GameSpot. And the reality is that before I took the job, I knew a certain percentage of young, straight men would vocally object to the presence of a transgender woman on the staff of a gaming site.

"They feel entitled not only to games, but to the communities that had built up around games. For these men, the presence of women on these sites was acceptable only if they felt that the presence of those women was intended to appeal to them.

"When the harassment started rolling in, I found that I was able to withstand it. With the support and acceptance of my colleagues, it was usually possible for me to dismiss the hatred I received as baseless, fearful expressions. I don't think the harassment is about me, I think it's about them.

"And I think the industry, and our place in it, is worth fighting for."

Conclusion: Damn right it is, Carolyn.

The industry is currently in the midst of a massive cultural shift. There’s a growing disconnect between the nearly half of gamers that are female, and overwhelmingly male population of games journalists and game developers.

When you wonder why women aren't rushing to fix that balance, remember this is the fucking emotional and even physical minefield they're signing themselves up for. Growing a thicker skin isn't the answer, nor is it a proper response. Listening, and making the industry safer for the existence of visible women is the best, and only, way forward.

Footnote: Two of the names of women that agreed to interviews for this article were changed at their request.

Brianna Wu is head of development at Giant Spacekat, and host of the Isometric podcast on 5by5. She's also a frequent speaker on women in tech issues.

Editor's note: We have disabled comments for this post. While most comments were respectful and within the guidelines of Polygon's TOS, our staff came to the decision that the piece could and should stand without comments. When a contributor wants to share something highly personal with our readership, we want to offer them a place to do that without having their stories called into question, shouted down or dissected (even by the commenters offering support). If you want to continue discussion of this topic, we'd encourage you to share your thoughts in this thread.

JoJo Siwa dances to Anything Goes as Pennywise the Clown, and It’s brilliant

By Jeff Ramos and Dave Tach