New, 30 comments
By Samit Sarkar@SamitSarkar Jul 24, 2014, 11:15am EDT
Source Titanfall on Twitter, Titanfall, and Titanfall on YouTube | Via MP1st

Frontier's Edge brings three new maps into Titanfall: Haven (screenshot above), Dig Site and Export. It will be available for $9.99 on its own, and it will be free to owners of the game's $24.99 season pass, which also includes a third map pack that is coming later.

Titanfall publisher Electronic Arts has not yet announced a release date for Frontier's Edge on Xbox 360. The game's first add-on, Expedition, was released May 15 on PC and Xbox One, and launched June 17 on Xbox 360. The last-generation version of Titanfall is developed by Bluepoint Games, not Respawn.

Respawn will also release Game Update 5 July 31 on PC and Xbox One. The studio announced the patch in a Frontier's Edge livestream yesterday, and said in a post on the game's website that the content update will introduce a new feature called the Black Market. There, Titanfall players will be able to buy items such as Titan insignias (which were introduced in Game Update 4) and Burn Card packs focused on particular uses. Currently, the game doles out random drops of Burn Cards during matches, but on the Black Market, players will be able to pick up specific sets of cards, like packs containing weapon cards or Titan-related cards. 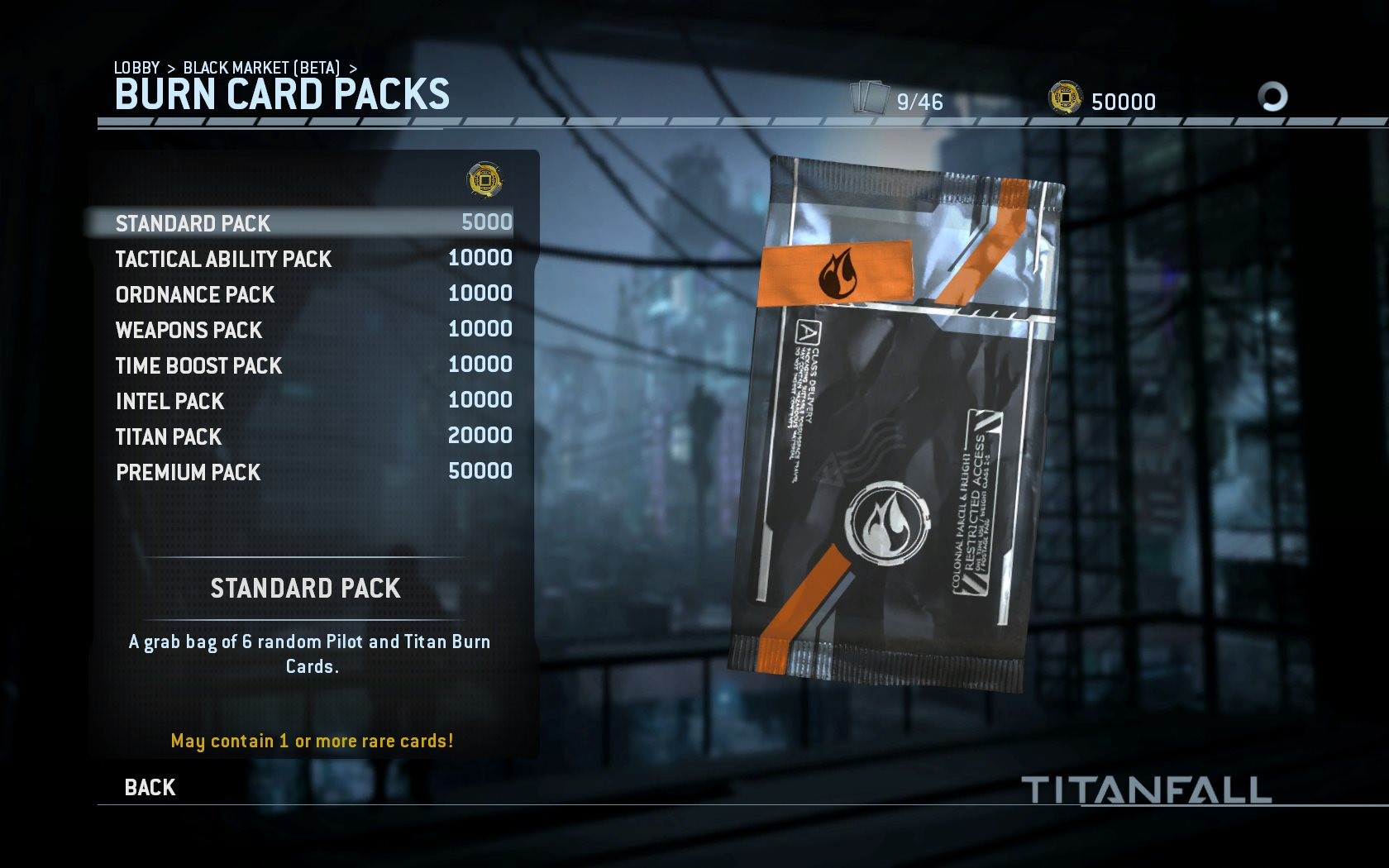 "The primary goal of Burn Card packs is to give you more choice in the kinds of Burn Cards you get and to fit different play styles," said David Shafer, a designer on Titanfall. The cards within a pack will still be randomized, but all of them will be cards of the type that players chose.

Players will pay for Black Market goods with a new in-game currency called Credits. According to Shafer, this does not mean that Respawn is adding microtransactions to Titanfall. Credits cannot be purchased with real money; they must be earned by playing the game. Players receive credits for finishing matches, picking up their first win of the day, completing daily challenges (which are debuting in Game Update 5) and discarding or selling Burn Cards.

"We have stated several times that Titanfall will not have microtransactions. Fear not, for we plan to keep that promise — NO MICROTRANSACTIONS!" said Shafer.

The Black Market will open up to players at level 11, and will remain available after they've regenerated (prestiged). Level 50 players will earn a certain percentage of Credits for the XP they earn in every match. Shafer added that Respawn may introduce additional types of Burn Card packs to the market in the future, but isn't sure what they might be.

According to MP1st, Respawn also provided details in yesterday's livestream on some of the other changes coming in Game Update 5. The patch will bring daily challenges to Titanfall, along with a notification when a friendly Pilot is riding on your Titan. Performance improvements in the update include support for multiple GPUs on PC, a fix for the 120 Hz bug and optimizations that should address issues with frame rate, screen tearing and more.

For more on Titanfall, check out our full review.