Yogscast's game failed, but this is why the game that fans are actually getting didn't

Share All sharing options for: Yogscast's game failed, but this is why the game that fans are actually getting didn't

When Yogscast's Yogventures project was officially canceled last week, fans who had backed the game through Kickstarter were promised Steam keys for at least one new game to hang their hopes on: TUG.

Developed by a team of 25 people at Nerd Kingdom, TUG is an open-world sandbox survival game that's openly inspired by Minecraft but also looking to expand that formula with a unique art style and evolving design. Sound familiar? That's basically the exact same pitch as Yogventures.  And in fact, TUG was Kickstarted as well. The only difference is that TUG is already playable through Early Access on Steam and already receiving largely positive reviews from a growing player base.

How did TUG succeed, then, where Yogventures failed? Nerd Kingdom founder Peter Salinas says that step one was going in prepared. "There was a detail I think a lot of people missed on our Kickstarter," he says. "[The Kickstarter] was a lot about getting needed art support to make our already-developed technology into a game. We didn't go there to expect the community to make something this ambitious with this amount of money." 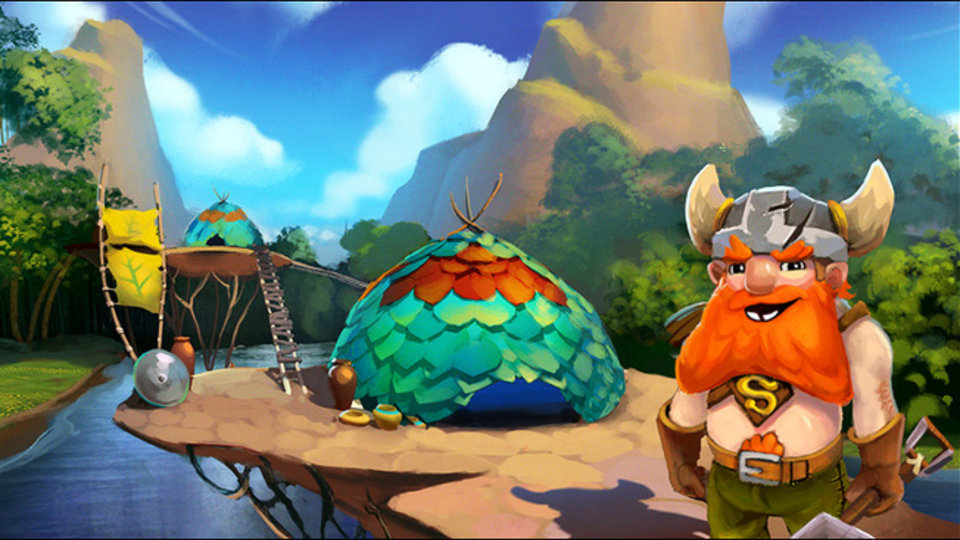 TUG raised just under $300,000 in its Kickstarter. By comparison, Yogventures raised well over $500,000. In a blog post last week, Yogventures developer Winterkewl Games revealed where all the money had gone, including some shocking details such as paying one artist $35,000 for a mere two weeks with no actual work produced.

Salinas hadn't read that blog post when I contacted him initially, and that detail alarmed him. It's something that he's certain could never happen at Nerd Kingdom. "We are process nuts," says Salinas. "We are probably some of the biggest planning nuts you could meet... There are lots of moving parts and we take things seriously. We do have a project manager, as well as a producer. There is a method for tracking our progress through a point system and evaluating how we do things constantly. We even have third parties come in to objectively review our progress and structure."

According to Salinas, those third parties have revealed that Nerd Kingdom has spent "about one-third" of what a "typical AAA developer" would spend for the same amount of progress. Currently, the developer plots out updates in three-month segments, allowing them to adapt to concerns and problems as they come up without having to disrupt long-term plans. And a major part of that process is audience feedback.

See, Salinas isn't actually a traditional game designer. "I'm a behavioral scientist," he explains. "That maybe sounds a bit stuffy, but I just look at what people do in games very differently than most would."

TUG actually began more than four years ago with research into how and why people play games the way they do. Salinas and his team initially reached out to Minecraft developer Mojang to work on a partnership that would create a revenue model for this ongoing research. When nothing came of those plans, they decided to create their own game.

"One thing led to another and we started building," Salinas says. "The engine and game have been in development for a little over 16 months now, maybe a couple months longer if you include designer architecture stuff."

Salinas says the team at Nerd Kingdom includes some veterans of the game industry. But it also includes people who have come over from the academic and tech sides. His role as a behavioral scientist shows in how excited he gets discussing their platform and how it's shaped by research into people and play. "We still gush just talking about it," he says.

Despite a lot of disappointment from the Yogscast fanbase at having their dream game replaced by something else entirely, Salinas is not too worried about stepping into Yogventures' shoes. "It's a bummer that it may be looked at as just a runner up," Salinas admits. "But I think that anyone that looks at what we are doing longer than a moment can see it may be worth a few more moments of consideration too."

Salinas is adamant that Nerd Kingdom has received no money from Yogscast for this deal. In fact, by giving away over 13,000 keys for its game, the studio stands to lose money. Currently TUG costs $9.99 on Steam and Salinas says they receive about $7 for every sale, so giving away keys to all of the Yogventures backers is almost $100,000 in potential sales down the drain. But Salinas says this is "not a huge loss."

"This involvement to step in on Yogventures was not about the money," he says. "We knew that if people came into this project skeptical, but we proved it was impressive enough, it would be worth sharing. People give away thousands of keys all the time... We have faith in what we are doing and are always very clear about things we work on, how they impact things and what to expect."

If there's one thing Yogventures backers shouldn't expect, it's for assets from the game they backed to show up in TUG. In an e-mail to Polygon last week, Yogscast's Rich Keith noted that all of assets and source code created by Winterkewl Games had been provided to Nerd Kingdom. However, Salinas says his team will not touch it.

"We aren't going to take or incorporate anything. We were offered a link to the code and assets, and we did not even click through to review it. We are building an entire engine from the ground up. Unity gameplay has no place in our architecture, sadly."

The best Yogscast fans can hope for, in that respect, is some eventual Yog callouts in TUG, but Salinas says that will "be more about subtle nods than themed content."

Where Salinas and company cannot offer Yogscast fans exactly what they signed up for, they can offer something that Winterkewl Games never did.

"Constant communication and transparency," promises Salinas. "That is pretty much it. The gaming masses are actually a great deal more understanding and sophisticated than many give them credit for. There is just very rarely a flat medium dialog to let people engage in ‘human' ways."

TUG may not be Yogventures, but with that positive, player-centered attitude behind Nerd Kingdom, both Salinas and the crew at Yogscast are hoping that it will end up as something better.