Twitch Plays Pokémon, the gaming phenomenon that took the internet by storm earlier this year, is moving to the most recent generation of Pokémon titles this weekend with a playthrough of Pokémon X.

The Twitch channel and its viewers are set to begin playing Pokémon X at midnight ET on Sunday, July 27. In the meantime, the channel is streaming Animal Crossing: New Leaf. Once Pokémon X is completed, Twitch Plays Pokémon will return to Pokémon Stadium 2 as the main interstitial game between other specific titles, according to the channel's description.

Twitch Plays Pokémon essentially works as a massively multiplayer co-op playthrough of a Pokémon title. Viewers type into the chat, and the channel parses certain commands into game inputs. It only works through an emulator for the Nintendo handheld in question, such as a Game Boy or Nintendo DS. That means that until recently, it would have been impossible for Pokemon X or Pokémon Y to run on Twitch Plays Pokémon — a stable 3DS emulator has yet to be developed. 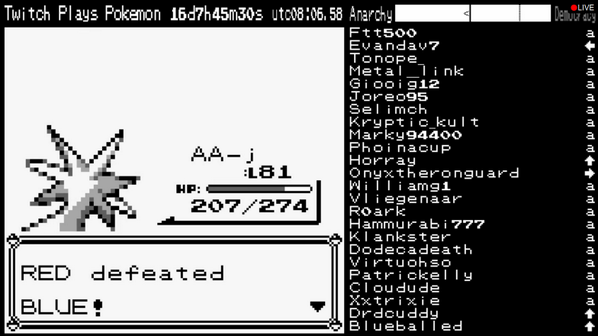 How Twitch is crowd-sourcing an amazing Pokémon multiplayer game

In early May, an individual who goes by the name dekuNukem on Reddit announced that after a week of work, he had built a special rig to enable external control of a 3DS. (Pokémon players may recall dekuNukem as the same person who modified a 3DS to automatically detect and catch shiny Pokémon in Pokémon X and Pokémon Y.)

Dubbed the "3DS Streaming Console with External Control Interface," or "3xtDS," dekuNukem's device is a modded 3DS that features a capture card and a USB-based interface. With those modifications, the handheld's buttons, circle pad and touchscreen can be controlled by input from a computer, and the unit can stream video and audio to that computer.

"This opens up the possibility of not only [Twitch Plays Pokémon X and Y], but also anything that runs on a 3DS," said dekuNukem, listing games such as Super Mario 3D Land, Fire Emblem: Awakening and, of course, this year's Pokémon titles, Omega Ruby and Alpha Sapphire.

In an email to Destructoid, dekuNukem pointed out that the fact that his device brings Twitch Plays Pokémon to real 3DS hardware, instead of an emulated system, has some important implications for the play experience.

"Since the game is running on a real 3DS, wireless connectivity will enable stream players to battle or trade with strangers around the world, and passerby are able to influence the stream by offering O-Power or trading," said dekuNukem. "All in all, I believe that the last last [Twitch Plays Pokémon] [sic] is something really special, and online interaction with real players around the world will play a non-neglectable role during the course of [Twitch Plays Pokémon X]."