Laila Shabir's Kickstarted game is nearly 10 months overdue. But it's not because she mishandled the budget. No one left the project. In fact, everything had been going extremely well until April.

That's when she got distracted.

Quite unexpectedly, Shabir realized that helping young girls learn to make their own games was more important. So she put her own company's game aside in order to help Girls Make Games become a reality.

Learn District is Shabir's indie educational game studio. Its game, Penguemic, is a quirky vocabulary-builder that raised just over $50,000. It was on its way to a scheduled June release when, around April of this year, Shabir wanted to hire a developer to begin working on the team's next title.

"I really wanted it to be a girl," Shabir says, "because currently the industry is something like 80/20 [men to women]. We spent months trying to find that person and it was impossible."

"It was supposed to be a small workshop in our backyard."

The problem was that all of the qualified women in Silicon Valley, near where Learn District is headquartered, were being pulled into the larger technology firms like Google and Microsoft. The local talent pool was only so deep.

"These big companies are taking resources away from me," Shabir says, "an indie game developer. So, how do I get girls interested in making games? I know girls like playing games. Maybe a summer camp would do it."

She idly tweeted out the idea, and it caught fire. Before long Tim Schafer, founder of Double Fine, was championing the idea.

No permission needed: an all-girl game development camp in Illinois

"It was supposed to be a small workshop in our backyard," Shabir says. "It turned into 14 international locations in just a few months."

The inaugural camp was held at the Computer History Museum in Mountain View, California in June, with follow-up camps hot on its heels. The next session is in Los Angeles. Then San Diego, Austin, Boston, Denver, Washington D.C. and Seattle. Later London, Copenhagen, Warsaw, Melbourne and Dubai. Shabir will be attending most of them herself, trying to crystalize the ethos of each session.

"Our mission is to reach a million girls by 2020," says Shabir, a number she can't quite seem to believe is within reach. But girls the world over are clamoring for the camp.

As Shabir describes it, GMG sounds intense. Just about the only easy day is the first one, where campers are given the opportunity to play a wide range of indie games, from Towerfall to Fez.

The goal is to develop a "flavor profile" of everyone in the camp, and use that profile to organize the girls into teams. After that, the groups of five to six girls aged 10 and 16 have less than three weeks to brainstorm a game, write a design document, learn to program, solicit freelance music and art, polish and then test their creation. And then they have to sell their idea to a panel of experts.

In the end, Learn District puts up a Kickstarter for the winning game and, if it's successful, they help the team make it.

The first game, a title called The Hole Story, had already made its $10,000 goal and has around 2 weeks left to raise even more money.

"Around 75 percent of our students were on some form of scholarship."

Part of the first camp's success has been a high student-to-teacher ratio. The Mountain View camp had 10 instructors to 35 students, a ratio that's roughly 10 times higher than the average American middle school classroom. And camp isn't cheap; a full three-week course costs $1,200.

Making sure that girls from different socioeconomic backgrounds have the chance to attend is part of GMG's mission.

"About 75 percent of our students, even in the Bay Area camp, were on some form of a scholarship," Shabir says. "We followed the same model for all of our camps."

The only limitation on the growth of GMG, Shabir says, is the growth of Learn District. That's why she's considering spinning the camps off to be its own entity with its own management structure. 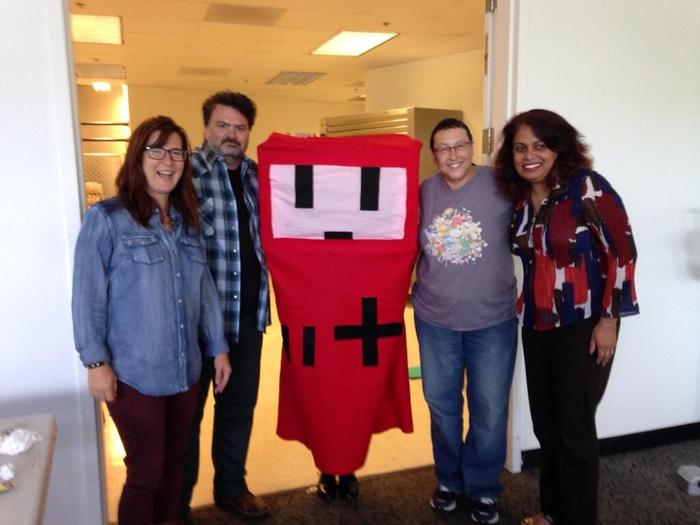 "I need to put the organization together," Shabir says with a sigh. "Learn District is stretched thin. So my first goal after the summer camps is to put a structure together where we're probably going to go the non-profit route and partner up with some great companies who have been connecting with us. We've heard from Ubisoft. We heard from Rovio. We heard from Blizzard. All these big gaming companies want to promote this. I think having those strategic partners and then also educators, including big charter schools or big school districts in different cities, would allow us to get to [low income] neighborhoods as well."

But Shabir is moving as quickly as she can to fill the need she's uncovered to get girls up to speed on programming and game design.

Tomorrow we'll meet one of the members of the Negatives, the team of young women behind GMG's first successful Kickstarter, and the very next game to be brought to life by the experienced team of indie developers at Learn District.