Share All sharing options for: Magic 2015 lead designer says Duels of the Planeswalkers is a yearly franchise 'like FIFA or Madden'

Magic: The Gathering - Duels of the Planeswalkers 2015 has had a troubled launch from the perspective of many fans. But whatever problems he'll admit to, lead designer Nick Davidson also adamantly defends the game: "I think it is the best Magic experience that you're going to get at that price point pretty much in history."

Davidson wants to clear up some of the misconceptions surrounding the latest Duels of the Planeswalker release and reveal some missing features that could be making a return. He begins by clarifying the different approaches Wizards of the Coast takes with Duels versus Magic: The Gathering Online.

"Magic Online is trying to really replicate the tournament environment and be 100 percent authentic to all the cards and formats that exist," Davidson says. "Duels of the Planeswalkers was originally conceived as a more arcade experience."

Davidson describes the Duels series as "Magic with the corners cut off, kind of like the corners on your peanut butter sandwich." He describes it as a more approachable version of the long-running card game, and a safe space for newcomers to learn how to play without feeling intimidated.

Magic 2015 is actually Davidson's first full game as a developer at Wizards of the Coast, but he believes his previous experiences have helped inform it. "A lot of my background is in MMO development," Davidson says. "There was a switch in the early 2000s in having a lot of new player areas in public spaces versus instanced spaces. What we learned is that nobody likes learning things in public. They don't like to make mistakes while other people are watching."

Duels of the Planeswalker, across its five iterations, has been created as a place where people who have never played Magic: The Gathering can learn its basic rules and strategies and make those mistakes without other people watching. Online modes are available, but Davidson drives home again and again that Magic 2015 is at its core a single-player-focused experience. "If you lose against the AI, it's not going to laugh at you," he says. "It's not going to silently judge you for the rest of your online career."

"There are a couple of things we did that I truly regret."

Of course one of the core complaints about Magic 2015 is a change in the design that limits players to one specific deck after the tutorial. This has led many players to walls in the difficulty — points that are impossible to progress past for veterans, much less new players. According to Davidson, this claim is likely the result of a misunderstanding regarding the difficulty levels in the new game.

Davidson believes veteran Magic players who have played previous editions of Duels of the Planeswalkers are choosing the game's highest difficulty setting, Planeswalker, not realizing that this level of challenge is meant to be returned to when they have a more well-rounded card collection. "This is something that's new this year and again I think we've communicated pretty poorly," he says. "But on Planeswalker difficulty, we upgrade the AI decks. We put harder cards into those decks. So a lot of what we're seeing is that people playing on the regular difficulty level are achieving a 70 or 80 percent win rate."

The difficulty isn't the only part of Magic 2015 that has suffered from what Davidson sees as communication problems. "There are a couple of things we did that I truly regret," he says. "I am personally embarrassed about the Complete Bundle."

Listed as the "Magic 2015 Complete Bundle" on Steam, this pack costs $34.99 rather than the regular price of $9.99. Many players bought it assuming it was, as the name implies, "complete." Davidson says that "about 14 percent" of Magic 2015's cards need to be purchased through a booster series; many players believed they were getting all of those cards in addition to the core game when buying the Complete Bundle. Instead, this pack merely provides immediate access to all of the cards you can regularly get in the game without needing to unlock them via regular play.

"It was poorly named, poorly presented and poorly communicated," Davidson admits. "Honestly, I've seen the feedback. It did not behave according to intention. What that was meant to be was a quick start bundle for players who wanted to jump directly into multiplayer without going through the whole process of earning the cards themselves. The messaging around it was flat-out wrong."

Davidson says that Wizards of the Coast is addressing the mistakes with the Complete Bundle "on a couple of angles," promising that they'll have more news soon.

Speaking to the booster packs more generally, Davidson says his goal from the start was to "minimize the impact" of the paid cards for anyone who hops into multiplayer. "We playtested these decks extensively. Yeah, there are some nice cards [in the booster packs], but I personally have been playing online on Steam quite a bit with zero of the premium cards, and I'm winning quite a bit.

"Magic is a game where strategy evolves from additional choices," Davidson says. "I can't argue with people saying that yes, people are paying for advantage. At the same time, I feel like we've minimized the impact of that to the point where people are having a fantastic Magic experience spending the $10 on the core game."

I express some of my own feelings about the problems facing Magic 2015 to Davidson — that it's hard to feel comfortable investing money in cards when I know a new version of the game will come out next year and cards won't carry over. I suggest that a game like Hearthstone, as popular as it is outside of the traditional card game fan base, has shifted expectations for a lot of people.

According to Davidson, the competition has not significantly impacted any decisions in Magic 2015's development. "Obviously we're aware of what's going on out in the market," Davidson says. "But our focus has always been on creating the best on-ramp for new Magic players. That's true regardless of what else is going on out there. There's a lot of respect and understanding for other games that are out there, but our focus has always been on the role that Duels plays in this larger Magic ecosystem."

The cards may not carry over between releases of Duels of the Planeswalkers, but Davidson notes that your ability at the game does. He believes that keeping the cards separate allows Wizards of the Coast to keep each release fresh, similar to how the paper game rotates out cards that are legal in tournaments.

"It's not like we ever come to your house and uninstall the game from your computer," he says. "The experience is there, and it's designed primarily as a single-player, campaign-driven experience. We are definitely up to this point where Duels is a yearly franchise, like FIFA or Madden."

And while Davidson seems open to criticism and willing to admit where he believes they have made mistakes, he also fiercely stands behind the game he helped create and its place in that ecosystem. "I firmly believe it's the best Duels experience we've ever had," he says. "It's disappointing that that's being shadowed by this reasonable if slightly overblown conversation around the changes to the overall model."

Disappointed or not, Davidson says Wizards of the Coast is listening to fan feedback carefully — especially when it comes to one of the most-requested features cut from Magic 2015, the two-versus-two mode known as "Two-Headed Giant." 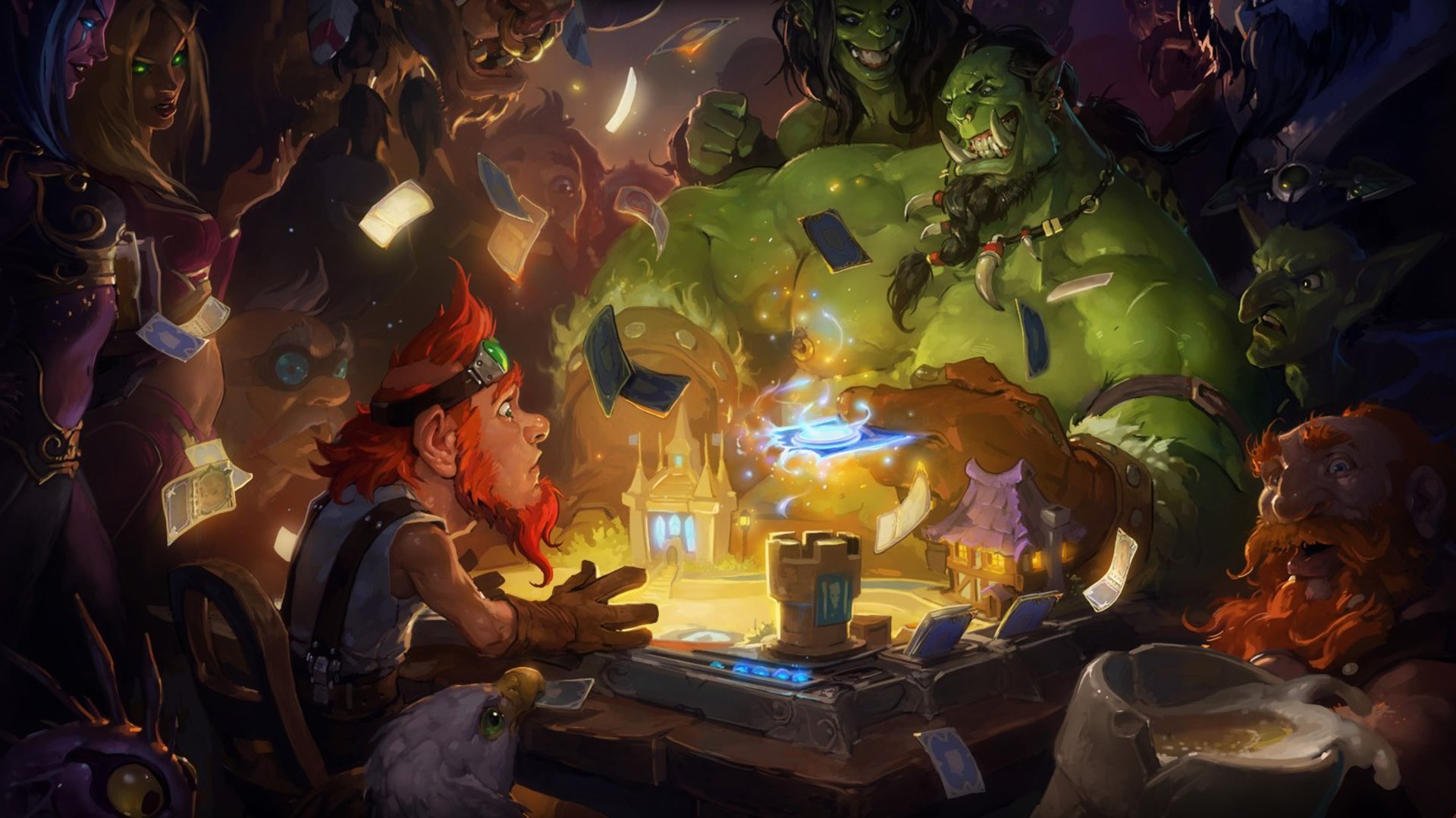 "We know that any time we remove a feature from a franchise, there's going to be some amount of blowback," Davidson says. "We underestimated just how powerfully the community feels about Two-Headed Giant. That's something that we're going to be bringing back."

Davidson says he's not ready to reveal how or when Two-Headed Giant will return to Duels of the Planeswalkers — whether it will be an update, an expansion or something that isn't ready until next year's edition of the game — but he does provide some information on why it was cut in the first place: "There's a lot of rules and minutiae that make Two-Headed Giant a weird format. With all the pressure we put on deck-building this time around, it was really a question of whether this was also the year where we teach people all the nuances of that format.

"If we're not going to teach it properly, it was ultimately my call to pull it."

More than anything Davidson wants fans to know that Wizards of the Coast is listening and has heard complaints loud and clear. "We have heard these concerns, and I feel like a lot of them are valid," he says. "There are some we're going to be able to address in the short term through better communication about features and content and what they contain.

"There are a lot of reasons to be skeptical, but I urge people to give it a try at the demo level and at the base level. If people do not engage in any of the DLC options, that is absolutely fine with me, but I think the game stands on its own."