Share All sharing options for: Hatsune Miku's lyrics are being localized into English for her next game's Western debut

Virtual popstar Hatsune Miku, born from a synthesizer software that warps sound into a humanoid voice, has earned her own series of rhythm video games by virtue of her idol status. The Vocaloid — the name for Miku and similar digital divas, taken from the name of the software supporting them — is a nationally-recognized icon in Japan and has even put on live hologram concerts. Miku's songs are all in Japanese, and when her games are brought to Western shores they have remained that way — until now.

For Hatsune Miku: Project Diva F 2nd — a rhythm game that launched in Japan this past March and will hit North America and Europe later this year for PlayStation 3 and Vita — publisher Sega will localize the lyrics, giving Miku's English-speaking fans a deeper window of understanding into her world.

Localization is already a lengthy, involved process, but translating song lyrics is a particularly sensitive endeavor. Speaking with Polygon, experts on Miku's localization team said that not only is it important to make sure the lyrics make sense, but all translations have to be faithful to the tone and intention of the original songwriter; And with dozens of the songs in Miku's games written and licensed by other artists, chasing them down for approvals is just one tiny part of the massive task they are undertaking.

"We did go through a really quick translation process on the first game, but unfortunately, we didn't have time to get those lyrics packed together, get them in the game, go through a Google processor...so that actually never came to light," said producer Sam Mullen. "But for the second game, we wanted to really challenge ourselves and see if it was something we could really get done.

"It's not only a challenge for the localizers, but there's actually a whole internal group process," he added. "We have to get everybody on board at Japan, and we have to get all the songwriters at home on board as well because it's their song, we're doing work for them and they have to give us their approval."

"We wanted to really challenge ourselves and see if it was something we could really get done."

Many of the songs in Miku's games are specially commission by Sega, with the company reaching out to specific artists and asking if they would create a song exclusively for her games. Others are pulled from what's popular on the charts at the time. Once these song lyrics are translated, the translation is approved by the game's Japanese producer before being sent off to the original artist for his or her approval.

"The first step is we do a courtesy reach out to the artist and say, 'Hey, we'd like to localize your song. If you have a problem, with that, please let us know.' And then they basically have a right to say, don't do that," Mullen explained. "But if they say nothing or say yes, then we start going through the motions. And it's very, very different from a typical localization process, and it's extremely multilayered."

Artists then give their input before sending it back to the translation team, who must then tweak it based on the artists' changes and again run the translation back for an approval. Mullen explained this as a very "nitpicky" process, with both the North American and Japanese teams engaged in a constant back-and-forth finalizing the translations. Additionally, much of Miku's songs are self-referential, touching on the Vocaloid universe and previous content within her world.

For Project Diva F 2nd, players will have to option to toggle lyrics display between the original Japanese lyrics, their Romanji (phoneticized Japanese) version and the English translations. The words coming out of Miku's mouth will be in their original language, however, because translating them means a whole new mound of programming and songwriting work — as well as more time to do so.

"What that would mean is that the artist would have to completely rebuild a new vocal line, and that actually requires a different type of translation, which we call a translyricization," Mullen said. "Translyricization is when you take a song and you rebuild the lyrics into a different language and line them up so they can be sung with your original tune. That's not the same as, this is being sung in Japanese and it means this is one thing, but when you actually have to take that line and rework it so it has the same cadence and rhythm as the actual song, you have to add in other words or use different meanings. As a result it becomes a different song."

Mullen explained that for the first Hatsune Miku game brought west – Hatsune Miku: Project Diva F last August — the localization team was "very upfront" about how much of the game would be translated into English. Due to production and time issues, it was not possible for the game's lyrics to get the localization treatment.

"But people constantly say, 'Hey, I would really love to see English lyrics, and, most of the time our fans have been very understanding," he said. "We really appreciate that because they say, 'Hey, Sega, we realize there's lots of licensing issues and it's very hard, but, if you can, please look into it.' And some people we've actually had who are like, 'Well, I'd like this game more if I knew what they were saying.' Ok, fair enough.

"But this time we really took that on board and we're challenging ourselves for this one product," he said. "We're doing this for you guys. Let's see what the reaction is." 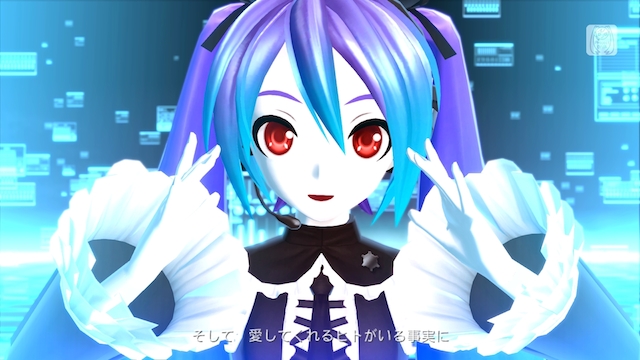 Localization director Jon Rodgers, who works will Mullen managing the translation process from his seat in Japan, is referred to by Mullen as the "sleeper cell" of the localization endeavor. Rodgers' role is to help Sega of Japan get the game done on time, and then helping Sega of America translate the game in a way that will allow Western-speaking fans to get the most out of it. He described the process as requiring "a ton of effort," with the decision to localize so deeply coming very early on in the development process.

"From the developer perspective, obviously, there was feedback from the first [Project Diva F] game that a lot of people wanted to see English lyrics," he said. "Sega of America was really in favor of it as well.

"One of the things that you don't know really know about the lyrics until you have them in English for the first time and you line them up with the videos is that they're gorgeous, they're beautiful," Rodgers said. "They create these music videos that you could almost see playing on MTV at some point. A lot of the lyrics are extremely poetic. When you see the English lyrics for, you'll be like, 'Oh that's what they're talking about!' They have really deep meanings and there's a whole new layer of enjoyment I think people are going to get out of the game once they see that in English."

Rodgers explained that the two major differences in localizing lyrics versus dialogue is the handling of words order and Japanese phrases that there are no equivalences for. A balance has to be struck that preserves the original meaning but also allows English speakers to make a connection with the meaning. Translating some lyrics directly will keep the literal words intact but leaves non-speakers unable to connect the dots.

"When you see the English lyrics for, you'll be like, 'Oh that's what they're talking about!'"

"If you start switching up the grammar just to make it sound a little bit more natural or flow a little bit better, what happens is you de-sync from what's happening in the video," Rodgers explained. "So, for example, if you have Guns N Roses' 'November Rain' and you're making the German or Chinese version of that, and you start switching up the lines, all of a sudden things get delayed and delayed and delayed. And at the end, Axel isn't getting married, he's still in the bar drinking with Slash or something when the most important line comes up. The bottom line is, especially while we were translating the lyrics, how critically important it is to keep that original Japanese line order, and the more we screwed with it, the more we were like, oh no, we have to get it back to order."

So why does Hatsune Miku's localization team think that the digital idol, so beloved by her native Japan, is doing so well on Western shores?

"There have been some really exciting things that have been happening over the past four or five years in the Japanese space, and I think the big buzzword I would say is 'access,'" Mullen said. "Japanese content is more accessible now than ever. When I was growing up ... if I wanted to watch some niche Japanese anime with subtitles, I had to go borrow the fan-subtitled VHS tape from my friend, before torrents or anything. They tried to monetize it in the early to mid 2000s with DVDs from Bandai Entertainment and whatnot, but it's just too expensive because they try to use the same monetization models that we use in Japan in America, and people just don't have that much money.

"But now, in the past five years with things like Crunchyroll and these different streaming sites where people can actually get the content a lot quicker, and YouTube and people just sharing content between social network sites, you're just seeing more of it. It's becoming more commonplace. The internet, of course, makes everything more accessible. It's the access that's really driving this, and I think that's part of it with Miku. I think it's the access and the boundary-less time we live in where a person can get online and access Japanese stuff, and it's not strange. It's just clicking through."