Share All sharing options for: 'Idiot gaming' innovator sets his snipes for PS4

If patriotism is, as Samuel Johnson wrote, the last refuge of the scoundrel, then Chris Bulch is, and is delighted to be, that scoundrel.

Bulch is the Englishman who back in May tweaked American noses with his deliberately stupid video game, Americlap, in which one claps into the computer's microphone in order to keep the United States flag from falling to the ground.

Americlap's genius is how it makes everyone feel like an imbecile, even the most steak-headed superpatriot. Americans have been conditioned since kindergarten to do a lot of things in the presence of the flag, but clap is not one of them. I've stood for the National Anthem at thousands of games, but I can't remember ever applauding the flag itself. Yet there I was, clapping like a windup monkey, my Cub Scout id compelling me to keep the flag from touching the ground.

Inevitably, the Stars and Stripes fall, no matter how long or how earnestly the player has clapped. Then, an ending screen summarily declares that you hate freedom, while displaying a symbol the English and the Americans both disdain: the French tricolor.

"I read once that the Grand Theft Auto series was supposed to be America as seen by the rest of the world," Bulch said. "If so, I guess Americlap is like a bite-sized piece of Grand Theft Auto."

Bulch, 22, hasn't rested on Old Glory. This week he consolidated his position in the idiot gaming genre with Glue Stick, available for free now for Android (and, for those who want a hand cramp, PC). In it, one must keep his or her finger pressed to the screen of a mobile phone for five hours — continuously — to win. Glue Stick coaxes people to continue playing by rewarding their amateurishly drawn avatar with bullshit items (like a coffee cup and a paper napkin dispenser) at certain milestones if they keep their finger on the moving target that the game serves up.

"There's five hours of gameplay in that," Bulch said. "If that's how you a value a game, well, Skyrim has something like 100 hours, and this is free."

"It's five whole hours, there's value right there," he deadpanned.

Bulch's design may troll the user and observers, but there's a recognizable principle behind it. He's genuinely interested in alternative forms of video game control. Americlap wasn't borne of intent to satirize country-fried bumpkins. It was a thought exercise, as Bulch tried to understand why lazy input schemes still compelled users to participate in a game.

"I challenged myself to make a game only using terrible mechanics," he said, "like there could only be button mashing or quicktimer events. So I thought about what scenario could be used for continual button mashing, and that was to keep the American flag up. Then, using the microphone and clapping to keep the flag up, and it all sort of came together well and gelled nicely."

Thus, the "sequel" to Americlap isn't some other parody of another nation — though Bulch has contemplated something called "Brit-Tut," in which a player tsk-tsks into the microphone to bring a kettle to a boil in time for afternoon tea.

"I challenged myself to make a game only using terrible mechanics"

Instead he's found another way to lampoon conditioned behavior.

"With Glue Stick it was kind of like — I would be out with my girlfriend at dinner and she wouldn't put the fucking phone down," Bulch said. So he sketched out in his mind a game that would require someone to never put one down. Obviously, simply tracking a dot on the screen with one's fingertip doesn't supply much of a payoff, but if it's periodically rewarded with virtual items, maybe he can keep people strung along.

I asked if any item randomly served up by Glue Stick was rare or supplied any additional gameplay benefit, in order to keep the player invested in waiting for the payoff timer to hit 0. "No," Bulch said, as if he hadn't ever considered the thought. "It's all crap." That's the point.

"It's completely pointless, no value whatsoever," he said. "It's a pretty thing to look at, kind of a false sense of achievement. 'Oh yeah I got a picture of a cat.' But isn't that video gaming?

"It's a five-hour collectathon," Bulch said, "Congratulations, you've wasted your own time."

There is, however, a game beyond the game. For those willing to play another 45 minutes beyond the 5 hour timeout they will unlock a super secret mystery gift: an apology for Americlap.

"Thinking about it now," says Bulch, "it's not much of an apology." There's a block of text saying sorry, and Glue Stick's sword (which represents the player's fingertip) turns into a baguette. "It's kind of a backhanded way of doing it," he admits.

This has potentially life altering ramifications for Bulch's next grand vision for the stupid-gaming genre: an as-yet untitled game conceived for PlayStation 4 taking advantage of the DualShock 4 controller's lightbar.

"You could describe the game as a mix between the old StarFox, with Super Hexagon reaction," Burch says, brightly. "You're moving on a 2D plane, and the obstacles come at you, and say you want to move to the top left of the screen, you have to move the PS4 controller up and to the left, physically."

The purpose? Make the player look like someone in those fake-ass stock photographs of attractive multicultural young people playing video games. You know, like this: 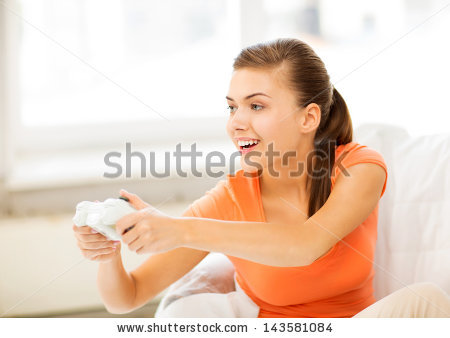 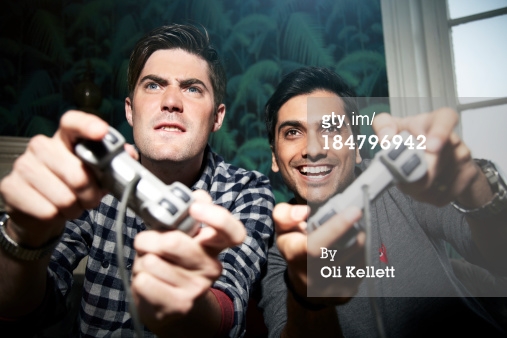 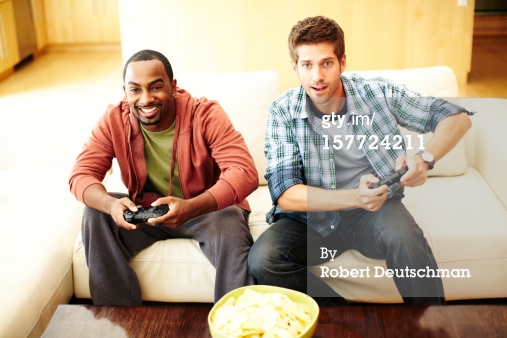 "You're posed in a completely unnatural way for playing games," he said, "and the game's trying to get you to do all of the button mashing and all the fake bullshit you see on TV."

Because while Bulch's games may be ridiculous, and they may make players feel like morons, they're still fun. The fun is in looking like a goofball.

"With Americlap, yeah, it's embarrassing to play, but it's kind of fun, in the same way Wii (Sports) tennis was fun," Bulch said. "Yeah, it makes people look stupid, but you have fun looking stupid. I don't know if people making these games realize that that's what they're doing."

Bulch and a partner have begun work, but he's fearful that Sony won't let him "within a million miles" of the PS4. Though PlayStation is famously friendly to indies, he doesn't yet have a license to develop for the console. He has a connection, though.

"I know somebody at Sony France," Bulch said. "But he saw Americlap. That might go against us."