In late April, Bleszinski filed a report for his new business with the North Carolina Department of the Secretary of State. The documentation lists Bleszinski as the registered agent of a company located in Raleigh, North Carolina.

Boss Key's certificate of authority, in addition to naming Bleszinski as its CEO, names Brussee as its COO and only other current officer. Brussee, prior to founding Killzone developer Guerrilla and serving as a production director there for nine years, assisted Bleszinski on co-developing the Jazz Jackrabbit series. Brussee's LinkedIn states that his current position is as an executive producer at Visceral Games, where he says he is working on Battlefield Hardline. 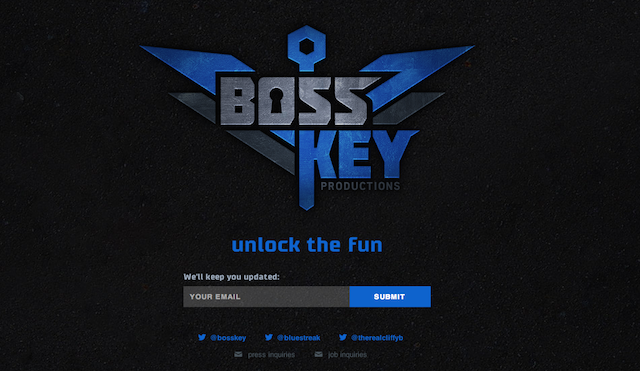 The website for Boss Key launched earlier today — less than a week after Bleszinski announced he was coming out of retirement — with links to Bleszinski's own Twitter profile. On the Boss Key official Twitter page, the header image also mentions a "Project Bluestreak"; a "bluestreak" twitter account was also linked on the Boss Key webpage. These links have since been removed from the website.

Bleszinski spent two decades at Epic Games working on the Jazz Jackrabbit, Unreal and Gears of War franchises before leaving the company and retiring from game design in October 2012. In January of last year, Bleszinski stated that he would like to return to AAA game development but was uninterested in starting his own large-scale studio. In August 2013, he shared a screenshot via his Twitter, claiming it was a "sneak peek" at a project he was working on at the time. That December he said he wanted to make a first-person arena shooter for PC.

Earlier this year, Bleszinski reiterated his desire to make a PC game because he wants to bring developers and players together, believing that is "where the community is." He also said that he would not be working with Black Tusk on the new in-development Gears of War game.

Bleszinski is slated to reveal his new game — possibly this Project Bluestreak — on July 8, according to the countdown timer he launched for the announcement. When reached for comment, Bleszinski alluded to his new endeavor as a "lean, agile, fun startup."

"I do not comment on rumors and speculation on the birthday of the nation that could allow a game designer to have a fantastic 20-year run at his first studio and then take nearly two years off only to seek out funding and start his new lean, agile, fun startup in Raleigh, N.C.," Bleszinski told Polygon.

After responding to us, Bleszinski also retweeted a Tweet from the official Boss Key account, which simply reads "soon."

Polygon has reached out Brussee and will share further details as we have them.