In Valiant Hearts, the minutiae of war is devastating.

This adventure game's motion comic style and jaunty animation look fairly cheery. But Valiant Hearts is both an emotional gut punch and a valuable history lesson. A history lesson that resonated for me, thanks to the undercurrent of real-life details about the war effort.

My knowledge of World War I was limited going in, mostly gleaned from dusty, bored afternoon sessions in high school history class, or a half-forgotten viewing of All Quiet on the Western Front. But Valiant Hearts effectively made the drama and heartbreak of the war matter to me.

Valiant Hearts opens with an animated sequence depicting the spark that ignited World War I — the assassination of Archduke Franz Ferdinand. The focus shifts to a French family — farmer Emile, his daughter Marie, her husband Karl and their baby son. Karl is German, and finds himself conscripted by his nation's army. Emile is drafted to fight for the French side. Later, I came across Freddy, a stoic American with a tragic backstory, and Anna, a gifted medic on the lookout for her father. Valiant Hearts placed me in their shoes, alternating between the four as I progressed.

These characters carry the game's emotional weight capably. I cared about these people, and wanted to see them all home safely. That lent a sense of tension and pathos to the gameplay — the more I saw of the war, the less likely I believed I'd be in for a happy ending.

That sense of urgency made the adventure gameplay all the more effective. Valiant Hearts' puzzles are for the most part logical and intuitive. While some scenarios are exaggerated for dramatic effect, they are used for storytelling, building the theme and setting. When I was in trenches with Emile, I needed to literally dig new paths, save friendlies from cave-ins and use dynamite to attack the enemy — the same actions an actual soldier would be tasked with during trench warfare. 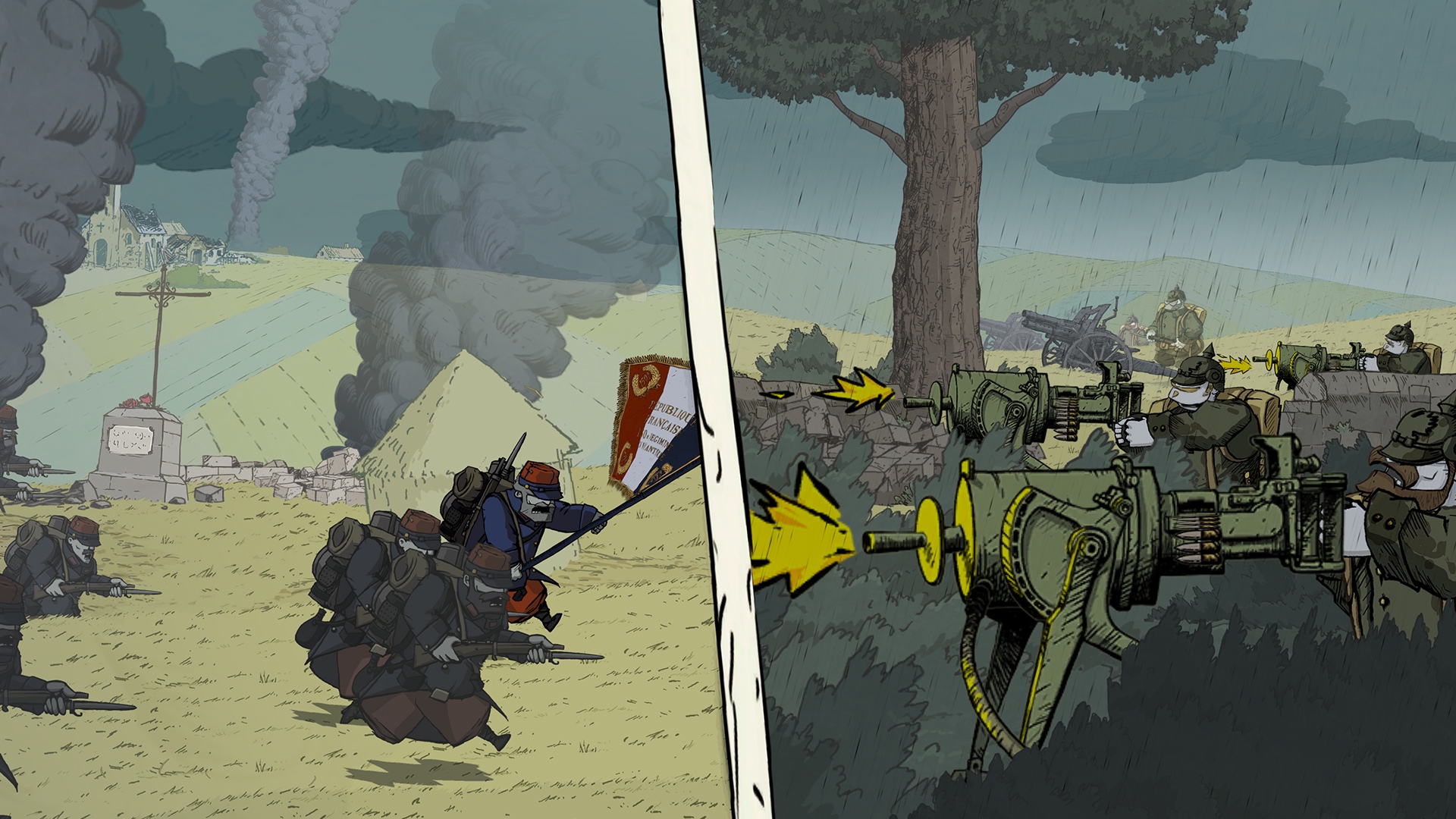 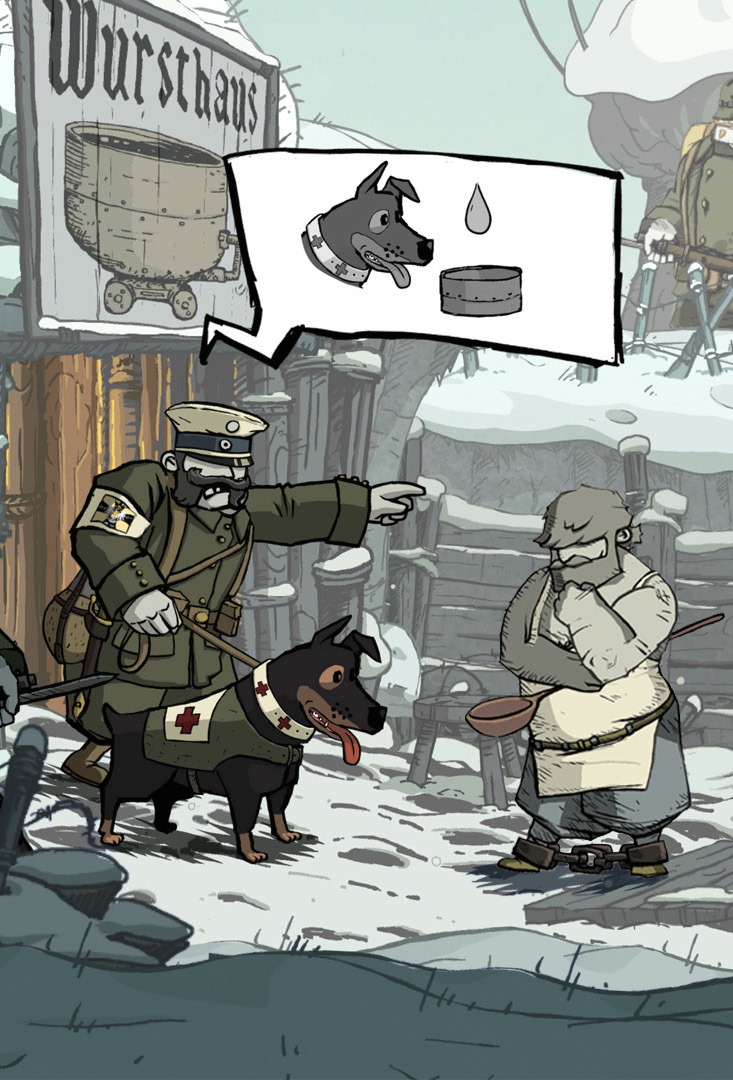 That emphasis on thematically appropriate gameplay extended to non-combat roles as well. Playing as medic Anna, I often had to perform brutal (but life-saving) procedures on ailing soldiers. In one very memorable puzzle, I found a bone saw and amputated a limb. Later, I had to do CPR on another major character, in an attempt to save him from chlorine gas poisoning. Even the humanitarian side of war is nasty business, and I was pleased that Valiant Hearts didn't shy away from it.

Supporting that realistic tone was a collection meta-game that was cleverly woven throughout Valiant Hearts. I picked up objects in the environment that told the real-life story of the war. At first, I thought this was just a cheesy mechanic to pad the game's feature list, but the accompanying photos and explanatory text sometimes blew me away.

I found a letter in a French house that told of groups of women who wrote letters to soldiers that didn't have close family ties, so that they could receive some degree of comfort from home. In a lonely trench, I found a mask — a urine-soaked rag, really, which was all that early soldiers had to protect against deadly chlorine gas.

Perhaps it was because these elements weren't fictionalized at all — and they were accompanied by photographs from the actual event — but I couldn't get them out of my head. So often, I play games that are ostensibly about war or conflict, but no headshot or stabbing or beheading has ever stuck with me as long as that photo of a Canadian soldier with a ragged cloth over his mouth. Tiny details like that spoke volumes about the destruction and pain that the war brought. And that hit me even harder than Valiant Hearts' fictional story.

These facts stayed with me even when Valiant Hearts' tone lightened. At times, the plot took a turn towards the caper genre. But these lighter elements felt misplaced. The worst offenders were the car chase sequences, where I drove wildly to avoid bombs and obstacles on occupied streets. The action in these scenes was competent, but it didn't really add anything to the game. It felt superfluous and even a little goofy, standing in stark contrast to my time in the trenches.

In its best moments, Valiant Hearts is basically a playable history lesson. Its personal, heartbreaking fiction is bolstered by bits and pieces of real-life history that resonate with unexpected intensity. Valiant Hearts strikes a difficult balance in depicting the horrors of war and the hope that peeks through its cracks, but it does so with grace.