Share All sharing options for: Dungeons & Dragons now allows, and encourages, all forms of sexual identity

When I'm playing a game — any game: video, board, whatever — that gives me the chance to play as a woman, I take it.

Even if that woman is dressed in frills or nothing at all. Even if she looks, acts and thinks nothing like I do. It feels better when I play as someone I can identify with, even on a surface level.

The latest edition of Dungeons & Dragons takes this ethos to a respectable — and wonderful — extreme, by allowing and encouraging players to get as creative and free with the gender identity of their characters as with their personalities, alliances and abilities.

"You don't need to be confined to binary notions of sex and gender," the new rules state. "You can play as a male or female character without gaining any special benefits or hindrances. Think about how your character does or does not conform to the broader culture's expectations of sex, gender and sexual behavior. For example, a male drow cleric defies the traditional gender divisions of drow society, which could be a reason for your character to leave that society and come to the surface." 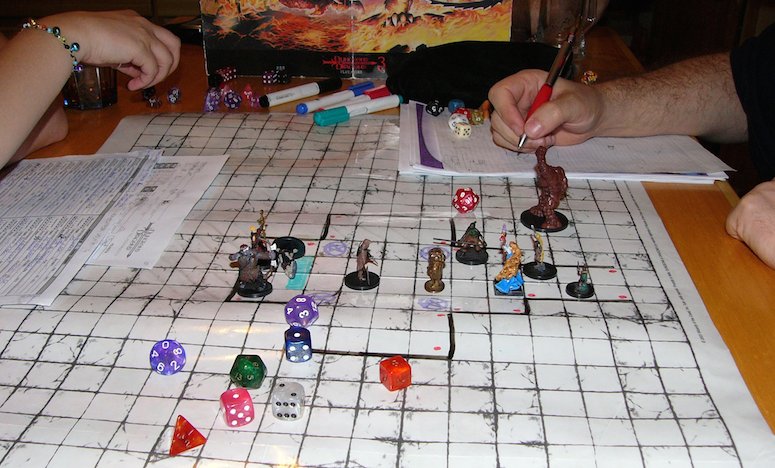 Want to play as a woman? A man? A non-binary person? A woman who presents as a man? Anything in between or above and beyond or something else entirely? Feel free!

"You could also play as a female character who presents herself as a man, a man who feels trapped in a female body, or a bearded female dwarf who hates being mistaken for a male. Likewise, your character's sexual orientation is for you to decide," the rules continue.

There's enormous power in fantasy. There's the power to explore new ideas and new identities, to communicate with people in ways that are outside of the everyday norm and to create a better or more comfortable existence to dwell in for a time.

And it's especially cool to see this sort of gentle encouragement of gender experimentation and freedom in a pen-and-paper game, where there are really no constraints for character creation. You don't need to be a talented visual artist to create a character — there's no painting, no 3D modeling, no asset creation to speak of.

No one involved with the game can claim you're taking up too many resources, and the principle of actively encouraging adding gender and sexuality as a liquid aspect to character creation opens the door to all sorts of interesting gameplay dynamics for your campaign.

D&D isn't the first pen-and-paper game to promote inclusivity. As independent developer and writer Anna Anthropy mentioned in a tweet yesterday, games like Dream Askew and Apocalypse-World promoted this kind of freedom long before D&D did. But it is encouraging that a game as mainstream as D&D is now taking the inclusive approach.

When gamers are constantly given weak-sauce excuses for a lack of female representation in games, the almost complete lack of non-heterosexual, non-cisgender or non-binary characters of any description, these new rules read like a needed breath of fresh air.

These new rules read like a needed breath of fresh air

This sort of update is also smart. While most players may very well be happy playing as, say, heterosexual or binary-identified characters, those who seek the freedom to explore other identities will happily flock to the game. I'll be the first to admit that I have limited experience playing D&D, but hearing about the new rules and the spirit of inclusiveness behind them, I'm tempted to run off and roll a queer female elf fighter.

You could always play with gender identity in tabletop role-playing games — the limits to the game and your campaign have long been imaginary — but something changes when the game addresses this openly. It furthers the idea that all characters can, do and should exist in your world, and you can be whoever you'd like, whether that person reflects your reality or not.

Now, the big question is — when the hell will more video game developers embrace this kind of freedom?