Akiba's Trip's setting can't make up for its shortcomings

Akiba's Trip: Undead and Undressed would work better as an anime.

Japanese developer Acquire provides an intimate look at otaku culture, the fandom and fervor surrounding Japanese anime, manga, video games and fashion in Akiba's Trip. The graphics may not be the prettiest, but the semi-accurate scenery of real-world landmarks was a powerful nostalgia trigger for my memories of living in Japan.

This wrapper is conceptually cool. Akiba's Trip is unapologetic of its weirdness, but the detail put into the game's aesthetic doesn't extend to its tedious combat and mission structure, detracting from some entertaining dialogue and stories about the characters' relationships.

Loading screens and lengthy fights make side quests not worth it 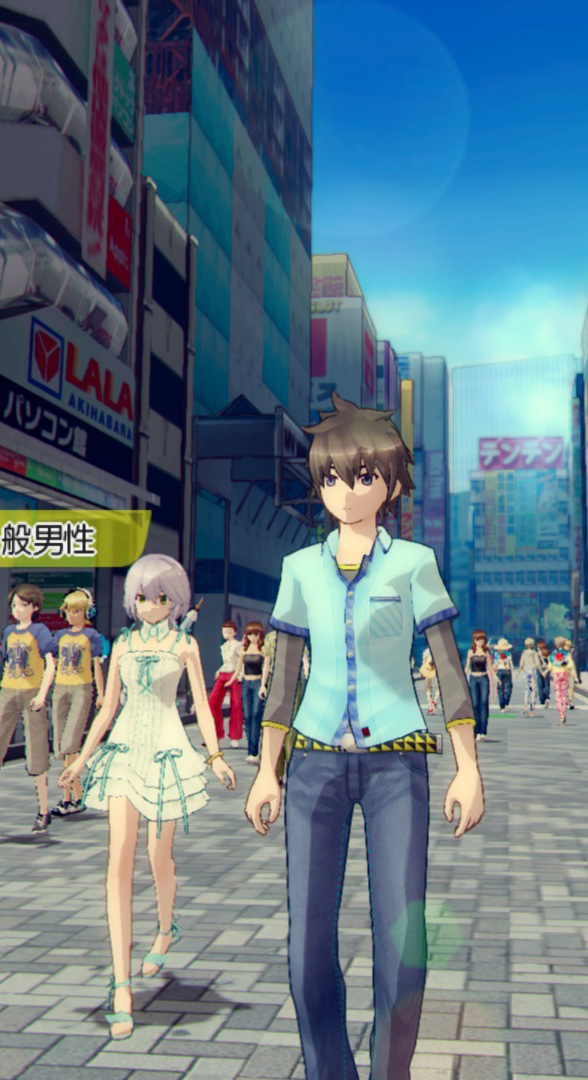 In Akiba's Trip, players enter the otaku world of Akihabara — a.k.a. Akiba — a ward in Tokyo that has become the mecca of electronics and pop culture. The real world Akiba attracts fashionistas and collectors of anime goods. The game version attracts the same crowds, but also a group of energy-sucking sun-allergic vampires called Synthisters.

At the game's beginning, the player character is turned into a Synthister and rescued from his new ilk by a young woman named Shizuku. The player character and Shizuku — along with the protagonist's ragtag band of anime-loving best friends — begin systematically taking down groups of Synthisters throughout Akiba, attempting to unravel the mystery of their existence.

As the main character, players select their own dialogue responses to other characters. The three options available break down roughly into three personality types: considerate and kind, womanizing jerk and classic otaku. The latter weaves statements about anime and manga into each answer, while the rude middle option paints every woman as a sex object. Different choices will make others perceive you in certain ways, and as time goes on characters will approach you differently depending on how you've acted. This means the mechanic has some actual meaning and made me consider how flippant my responses could be based on who I was speaking to. I liked this element, as it gave me at least one meaningful goal to work towards — good relationships with the people around me.

But the quest to discover the cause of and defeat the Synthisters is less intriguing than the relationship-driven subplots. One of these subplots involves the protagonist taking one of his lady friends as a love interest. Players can choose one of these four girls to take on missions. The more face time between you and any one of the leading ladies, the greater the romance, which rewards players with some pretty hilarious and awkward scenes of teenagers trying to flirt.

There are dozens of optional side missions that involve running errands or helping other characters, but everything ends in a fight against groups of Synthisters. I stopped completing side quests because I couldn't stomach the combat anymore. Running around between loading screens and getting into lengthy fights for a paltry bit of in-game currency wasn't worth it.

There are a few fun moments that play into the game's otaku aesthetic. In one mission, my friends entered a cosplay contest as a group of popular anime characters. During the contest, a group of Synthisters attacked them, and my friends kept in character with the cosplays they wore while they fought. This piece of the main storyline is just one small instance of the game taking mandatory time out from its "serious business" vampire storyline to tell a silly story around otaku culture — and the game's lack of self-awareness makes this lampooning enjoyable to watch. Building more severe situations like boss fights within funny fluff moments such as the cosplay contest made me want to stick around through the otherwise uninspiring combat and storyline sequences.

The time spent not trying to strengthen your romance (or bromance) in Akiba's Trip is taken up fighting Synthisters in hand-to-hand combat. Controls are streamlined, with only three attack button options available. These allow you to target the head, torso and legs of an opponent. Repeatedly attacking one area will weaken the clothing your opponent is wearing, eventually allowing you to rip it off. Once all head pieces, shirts and pants or dresses are ripped off, your enemy dies. If your own clothes are all ripped off, you die.

People spend a lot of time naked in Akiba's Trip. But the game never treats the act of being without one's garments as something to be embarrassed about, or even slavered over. In Akiba's Trip, the naked body is just that — a body without clothes. Clothing is ripped off in combat with a visual flourish, but beyond that there is no drooling over jiggling breasts or nosebleeds over lanky dudes running around in boxer briefs. "Strip" maybe be in the title of the game, but the emphasis on nudity is not as a feature to be ogled or bring in players desperate for a glimpse of side-boob. After so many Japanese games have treated nudity and sex as titillation, it was refreshing to me to see it handled as a normal part of life and maturing into adulthood.

In this way, clothing is utilized like armor, with each piece adding boosts to different stats. Clothing pieces can be upgraded for even greater boosts, and while sometimes you can buy the items at stores within Akiba, you have a better chance of scoring more high-quality pieces in post-combat loot drops. The idea of using clothes as magic armor is a neat idea, but the system lacks any real depth or draw. The satisfaction of visually customizing characters to my liking just wasn't there because my lack of interest in combat made it hard for me to care about the clothes.

I struggled to find a rhythm in combat between the occasionally buggy AI and the difficulty of successfully landing attacks. No matter how much I leveled up, it never got easier. I weathered boss fights that dragged on for nearly half an hour because I couldn't get someone's hat off. And thanks to the lack of visible health bars, I couldn't track whether I was making any meaningful progress. Most combat scenarios ended in me wanting to scream. It felt like my skill level had nothing to do with how well I did.

Combat isn't the only main component of Akiba's Trip lacking luster. The mission structure requires players to run from one area on the map to another in an endless series of fetch quests, making for dull progression through the main story. Missions start and end at a manga cafe, where players can take the time to talk to other team members and learn about them. Events sandwiched in between involve little other than searching for an item or person and punching Synthisters. For hours, every new mission I got followed this formula and as gameplay descended into monotony, I very quickly stopped caring.

At least I didn't have to spend time running around areas on foot. Early on, players are given the ability to teleport between areas, which makes manual exploration an unnecessary time sink. Individual areas don't have maps, making player placement within them confusing. I found myself repeatedly taking a south exit when I wanted to take an eastern one, necessitating I backtrack and tromp through the area to find the other exit I needed. And even though areas are very small, they're constantly broken up by interminable loading screens. Moving around manually became frustrating, and I always hated having to go to new areas because it was such a pain in the ass to get to them on foot.

But Akiba's Trip could be most problematic for players that don't read Japanese. Most shop signs have not been translated and are left in kanji or katakana. In order to locate some shops, players will have to go down streets talking to every vendor, which necessitates another loading screen to open that vendor's purchase menu. It can get tedious if you can't just read the signs to locate the right shop.

However, the rest of the localization in Akiba's Trip is great — dialogue progresses smoothly and can be funny at times. With conversation so cleverly done, it's a shame that environment signs couldn't be translated so non-speakers didn't have to waste more time on the world map.

Akiba's Trip's setting can't make up for its shortcomings

Akiba's Trip is just as confused about its identity as its teenage characters. It's a cool look at Japanese otaku culture, and it has some well-written moments. But the writing and setting can't make up for its core pitfalls. Its mission and combat systems are so tedious that I struggled to find motivation to keep playing. The core idea of Akiba's Trip is more interesting than the game itself and is too mired in boring interactive elements to get off the ground.