Board and card game publisher Fantasy Flight Games has partnered with Firaxis Games to bring the hit game XCOM: Enemy Unknown to life as a board game. XCOM The Board Game, which was announced today, will be demonstrated next week at GenCon 2014 in Indianapolis, Indiana for the first time in public.

XCOM The Board Game is a hybrid digital game that requires a companion app to keep track of play.

"The app's primary function," reads the game description, "is to coordinate the escalating alien invasion, randomly selecting from one of five different invasion plans. Each invasion plan represents a general outline that the alien commanders will use to coordinate the arrival of new UFOs, plan strikes against your base, and respond to your successes or failures as it seeks to conquer Earth. The app manages all of these tasks and heighten's the game's tension as it forces you to respond in real-time" 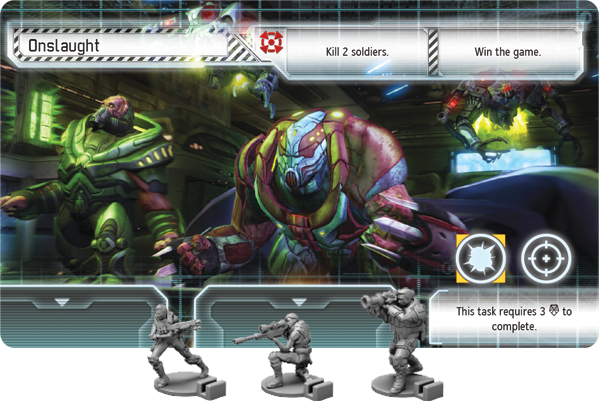 Fantasy Flight's website also says that the app will teach you how to play.

The cooperative game will be playable by up to four players or as a solo experience. The core game loop will utilize a press-your-luck type dice rolling mechanic where players are encouraged to keep attempting a string of ever-more-risky dice-based challenges to succeed.

It was revealed in Polygon's 2013 feature that much of the prototyping of XCOM: Enemy Unkonwn took place as a board game. It's unknown how, or if, these early prototypes influenced the design of Fantasy Flight's interpretation of the game.

Out of the box the game includes 16 plastic soldier miniatures, eight interceptor miniatures and 24 UFOs, as well as five custom dice and over 200 cards and tokens. Polygon will be attending this year's GenCon and will have a full preview.