NHL 15 is astounding in all the wrong ways.

EA Sports' NHL franchise has been a rock for fans of sports video games, a consistently solid series and a perennial contender for sports game of the year. Developer EA Canada built that reputation with a solid foundation of hockey that was realistic yet fun, and crafted engrossing modes of play atop that base that kept players coming back.

Alas, the NHL series has lost much of that depth in its transition to the PlayStation 4 and Xbox One. NHL 15 marks the franchise's debut on the new consoles, and it's more notable for what's missing than for what's present.

NHL 15 is more notable for what's missing than what's present

NHL 15 at least manages to satisfy on the ice. It looks incredible — close-up shots of players reveal fine details in jerseys and equipment, lights and video boards in arenas are reflected on the ice surface, and the venues themselves (or most of them, anyway) are faithful virtual recreations of their real-life counterparts.

The crowd brings a new dimension to the rink atmosphere, too. There's much greater variety than ever before in their character models, and the people really pay attention to what's going on in the game. Your home fans roar when you stifle an oncoming rush; voice their disappointment when you torpedo your own attack by going offside; and boo whenever you get called for a penalty. I also loved seeing hockey-specific crowd behaviors: A rowdy fan sitting by the visiting team's penalty box taunted a player who'd been thrown inside it.

EA Canada's work on real-time physics pays major dividends in collisions of all kinds, whether you're flattening an opponent with a big hit, bumping into a goalie or even nudging a teammate. It doesn't just look cool; it has gameplay implications in that it results in boarding penalties actually being called when they should be. That's something that didn't happen enough in previous NHL games, and it's nice to see NHL 15 reflecting the league's recent efforts in the area of player safety.

I did see a few instances of physics wonkiness, especially with players getting up after falling to the ice from a collision. They sometimes warped to their feet, instead of picking themselves up slowly as you'd expect. And there are some notable AI deficiencies on both offense and defense. On the default difficulty (Pro), CPU defenders play too passively in their own zone; it's too easy to skate past them. And I wish my own teammates were smarter about staying onside.

Aside from those issues, I love playing NHL 15. Teammates position themselves well on offense, so you can actually set up shop in the attack zone and cycle the puck until you open somebody up for a good shot. I haven't found any "money" goals or cheap ways to score; I've really had to work for it, and it makes it all the more satisfying when I do score. And NHL 15's revised analog stick controls for skating and stickhandling offer many more ways for you to fake out defenders. Timing a deke just right so you can slip past a guy and then blast a slapshot home from the slot — that's when this game is at its best. 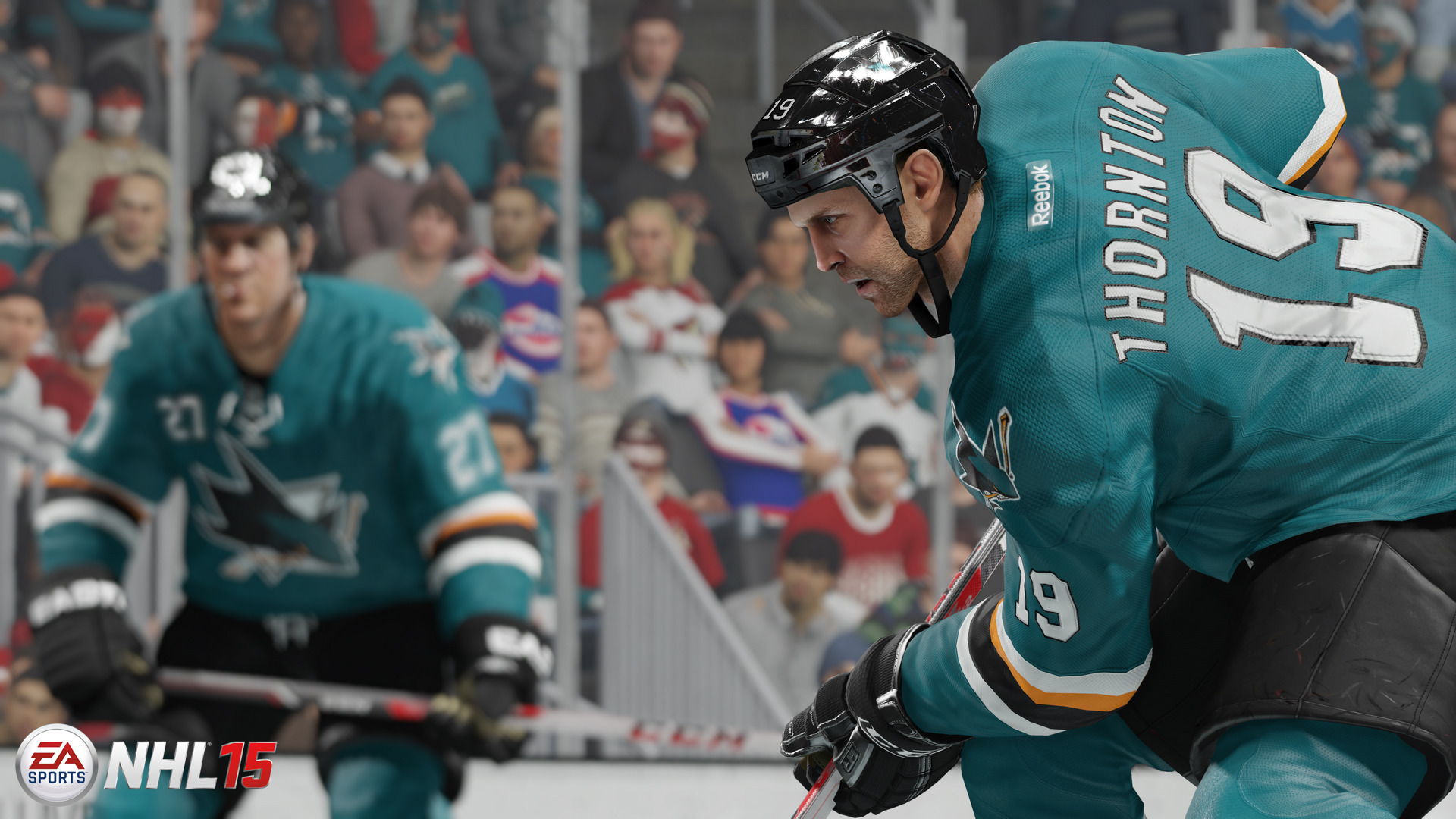 NHL 15 benefits greatly from a complete overhaul in presentation

NHL 15 also benefits greatly from a complete overhaul in presentation, which the series has sorely needed for years. EA Canada brings the full weight of a partnership with NBC Sports to bear in both the visual and audio departments, to impressive effect.

The NHL on NBC commentary team of Mike "Doc" Emrick and Eddie Olczyk handles the play-by-play, while TSN analyst Ray Ferraro offers thoughts from the rink level. I wish Emrick and Olczyk spoke more specifically, using team and player names instead of phrases like "the goalie" and "the visitors." And Emrick's audio occasionally suffers from the same issue that Madden had when it brought in Gus Johnson — both broadcasters have such high dynamic range, if you will, that it's difficult for the game to stitch together lines of different intensity. ("RIGHT IN FRONT OF THE NET ... he picks it up in the corner.") But they're accurate in calling the action, and along with Ferraro's trenchant insights, the commentary they provide is a strong first effort.

NHL 15 also features NBC Sports' graphical overlays for visual elements like the in-game scoreboard, and they do a great job of making the game look like an NHL on NBC broadcast. I also support EA Canada's choice to record Emrick and Olczyk's pregame introductions on video; it's a better solution than Madden's uncanny-valley-tastic virtual models of Jim Nantz and Phil Simms. The downside of that decision is that you can only record so many different segments — more often, I saw generic introductions about rivalries and "passion for the game" than matchup-specific comments.

In fact, the more I explored NHL 15 off the ice, the more annoyed, frustrated, incredulous and angry I became. The amount of content missing from NHL 15 on PS4 and Xbox One — content that existed in NHL 14 on PlayStation 3 and Xbox 360 — is staggering.

Entire modes are gone, such as EA Sports Hockey League, an online league system that supported six-on-six play and was introduced in 2008's NHL 09. In fact, online play in general has been gutted: The online franchise mode GM Connected is also absent, as is online team play in any capacity. EA Canada has pledged to patch in that latter feature, but at launch, only one-on-one online games are available.

Plenty of other features large and small have disappeared. Season mode is nowhere to be found, so you can't play a full season without the additional team management elements of the franchise mode, Be A GM. Gone are the NHL Winter Classic, the league's series of games played outdoors in January, and the Action Tracker, which tallied every individual event over the course of a game and let you watch replays of them all. You won't even see a list of the three stars at the end of each game. It's also impossible to edit players, a seemingly minor omission that matters greatly to die-hard fans. 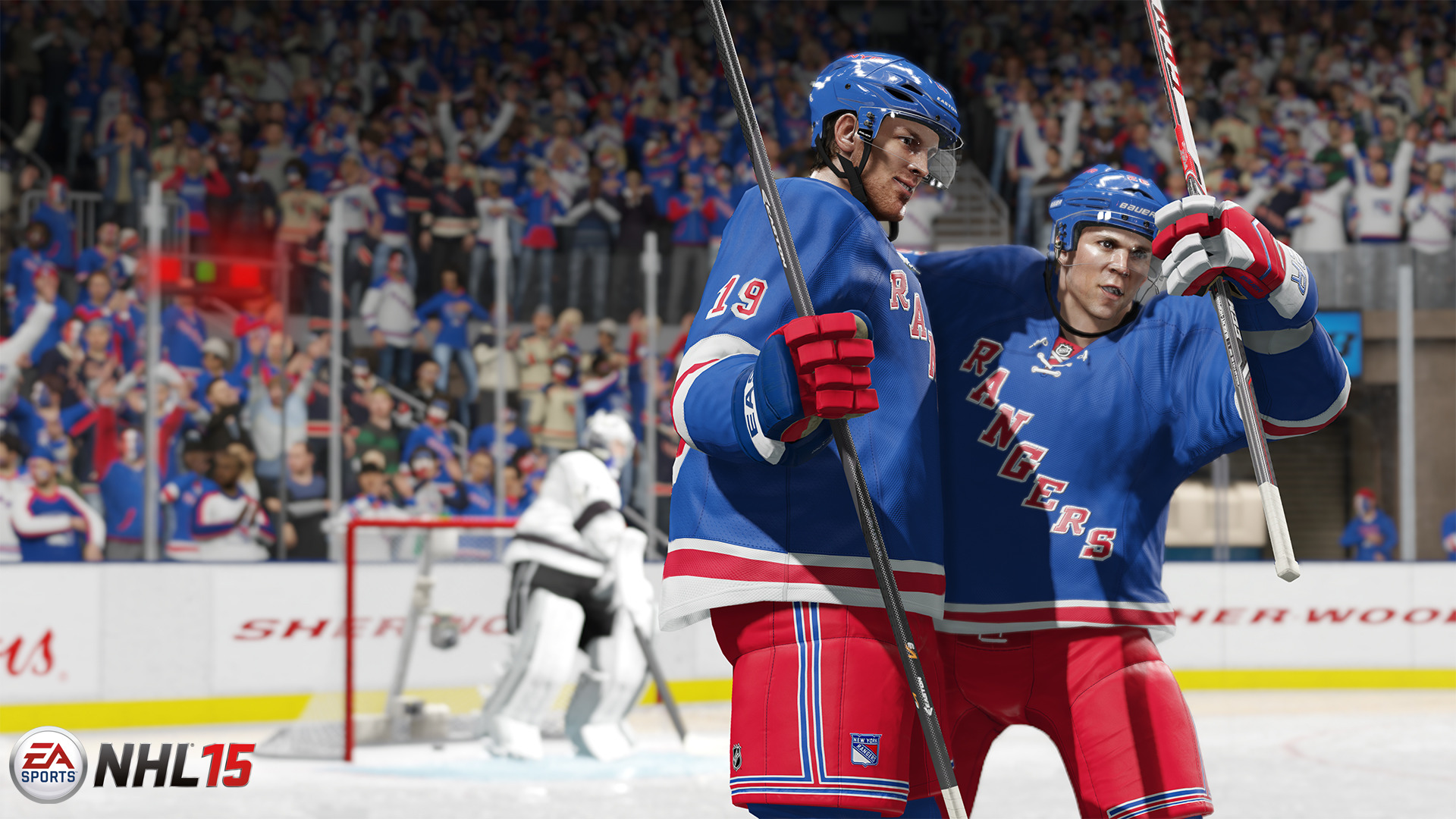 The problem isn't only that whole swaths of the game are missing. To add insult to injury, even the features that did make the cut are scaled back, half-baked.

Be A Pro, the single-player career mode, is devoid of any minor league play. This strips the mode of what drives it in the early going: the effort you put in to work your way up through the ranks, and the elation you feel upon being called up to the NHL. Instead, the only progression comes from improving your player's attributes as you try to make it to your team's top line. And on a personal note, I had an easier time creating a guy who looked remotely Indian in NHL 14 than I did in NHL 15.

In addition, you don't receive feedback from your coach during games, which eliminates the satisfying loop of hearing from your coach, making adjustments and improving your play. (That's being patched in soon as well.) Also missing are the "Live the Life" elements of the mode, the off-the-ice features like conducting interviews, which were introduced only a year ago in NHL 14. But perhaps the most mind-boggling omission from Be A Pro is the ability to simulate between shifts during a game. Without that option, you're forced to sit on the bench and watch your CPU teammates play while you're waiting to get back on the ice. Maybe it's good, then, that the Be A Pro coaching AI is bad at taking you out when you're tired.

Be A GM is similarly stripped down; it feels more like a season mode with some roster management trappings than a true general manager simulator. You can't currently start the mode with a fantasy draft (that's being patched in). And even the draft that takes place between seasons is fully automated, which makes it pointless to spend time scouting players during the year. Preseason games don't exist, and you can't play the games for your NHL team's minor league affiliate; the only available interactions are sending players down to the minors and calling them up.

Of course, EA managed to include Hockey Ultimate Team, in which players build fantasy teams with virtual trading cards. But even that microtransaction-based mode didn't survive unscathed: Right now, it only lets you play random opponents in matchmaking, not friends of your choosing.

Again, all of the aforementioned missing features existed in last year's game. (They're also available in NHL 15 on PS3 and Xbox 360, but they're essentially unchanged from NHL 14.) It seems reasonable for sports fans to expect, at the very least, feature parity with a year-old game — especially since EA managed to make that happen with Madden NFL 25 and FIFA 14 at the launch of the PS4 and Xbox One last fall. It's absolutely inexcusable that, nearly a year later, that's not the case with NHL 15.

Taken on its own merits, NHL 15 feels incomplete. In light of the NHL franchise's stellar history, NHL 15 is a colossal disappointment, and a major misstep for the series' first outing on a new generation of consoles.

NHL 15 was reviewed using retail Xbox One and PS4 copies provided by EA. You can find additional information about Polygon's ethics policy here.