Infamous: First Light creates some heavy feelings of déjà vu, both in playing it and reviewing it.

It's been less than six months since Infamous: Second Son was released for PlayStation 4, after all. First Light is technically a stand-alone game, but it uses the same setting, rehashes many of the same powers and stars a side character from the core game. It's very ... familiar.

The familiarity is likely to breed a sense of been-there-done-that for some who played Second Son, but Infamous: First Light deserves a deeper look. It wraps up everything that's good about the core game into a smaller, tighter package that serves as a great introduction to the Infamous universe.

Set prior to the events of Infamous: Second Son, First Light follows the story of Fetch, a drifter and recovering drug addict with superpowers that allow her to manipulate neon. Though she normally hides those powers, Fetch goes on the warpath when her brother is kidnapped, unleashing against everyone in her path in order to find him.

If you've already played Second Son, you know the dramatic conclusion to Fetch's origin story that this is all building up toward, but the journey provides plenty of worthy bumps along the way. The cast's near-flawless writing and acting make the story particularly worthwhile. From southern sleezeball Shane to returning antagonist Brooke Augustine, it's a joy just watching these characters talk in the game's brief but enthralling cutscenes.

It also helps that Fetch herself is a great character, more interesting and nuanced than Second Son lead Delsin Rowe. While both main characters share a similar rebellious attitude, Fetch's seems rooted in a more developed and painful past compared to the almost snotty anti-authoritarianism of Delsin. Even her graffiti — yeah, she does that too — is a little harder to just laugh off.

Graffiti isn't the only repeated side activity from Second Son. The majority of First Light takes place in the first half of Seattle from the core game, and the city is filled with recognizable missions — from APCs full of enemies to platforming challenges that reward upgrade points. These activities are a lot of fun, just like they were last time around. But given how recently I devoted hours to clearing out activities on the exact same map, I didn't feel the same pull here.

Most of First Light's story missions are also retreads, though the game offers something new in a handful of interludes: arena challenges. Arena challenges task you with killing waves of enemies and rescuing hostages by, well, killing waves of enemies before they kill the hostage. The faster and more skillful you are, the more points you get, allowing you to climb the leaderboards and try to beat your friends. It's more of a distraction than a replacement for real missions, but it's fun primarily because Infamous' fast-paced, superpowered combat is still fun. 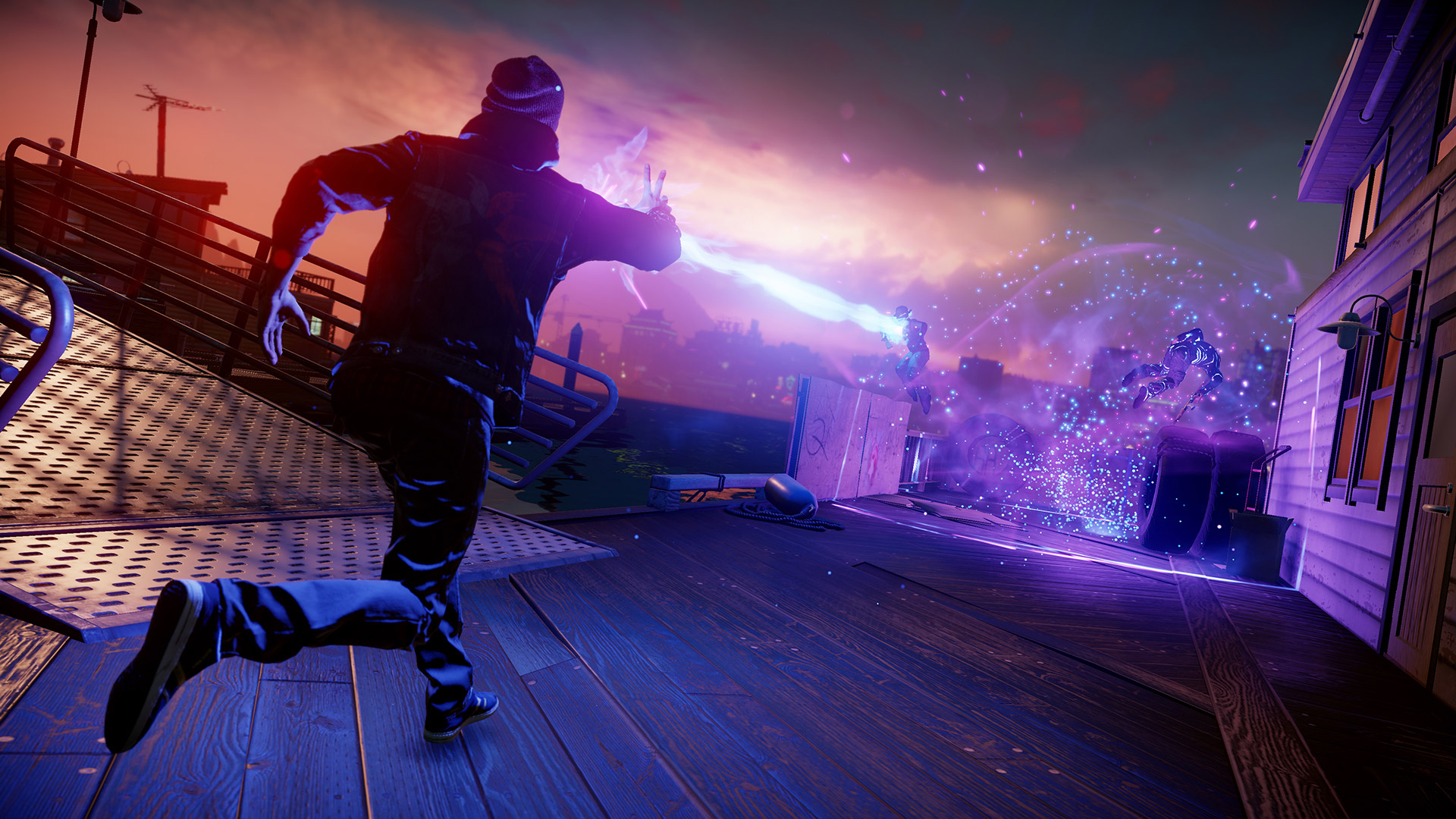 Each power set in Second Son is kept small — so as to not overextend the control scheme — but with enough options to never feel constrained by your current choice of powers. And they all feel suitably different as well. Both smoke and neon have regular shots, but smoke shots hit harder, while neon rewards you for carefully aiming at specific body parts. Both sets have more powerful, limited-ammo shots, but smoke's is a rocket that causes massive area-of-effect damage, while neon's is a more directed sniper shot that has a sizable charge-up time to take into account.

While I eventually settled on neon as my personal favorite of the game's options, I appreciated the variety and how well the game encouraged mixing things up from mission to mission. Between blast shard upgrades and narrative progression, I always felt like I was unlocking something new to mess around with.

First Light's gameplay seems limiting at first. Second Son gave Delsin access to a whole suite of different power sets to swap between, whereas Fetch is stuck with neon powers alone from the beginning to the end. However, Sucker Punch has wisely plumped up the offerings of this single set. Fetch gets new abilities (such as homing missiles) and also has a lengthy skill tree full of options to tweak both new and pre-existing abilities.

The city of Seattle has also been sprinkled with neon "boosts" that Fetch can zoom through to get an extra burst of speed. The changes to how she plays compared to Delsin are small, but they add up through the course of the game and she ended up feeling relatively unique. Switching back to Delsin for some arena challenges took a lot more adjustment than I expected at first.

While it may sound like there's not much to draw in people who have already played Second Son, Infamous: First Light has one major advantage over its forebear: a strong, satisfying conclusion. I won't spoil the finale here, but I will say that it's a wonderful setpiece mission. It also wraps up the threads of Fetch's story nicely, creating a convincing explanation for how she got to her place in Second Son.

Infamous: First Light is at its best if you've never played Second Son

Despite how nicely their stories slot into one another, the ideal scenario for playing Infamous: First Light is to have never touched Second Son. This works best as an introductory package for newcomers to the Infamous series, a tightly-wound, dramatic story with solid action and very little in the way of excess. It's not different enough from the Infamous game that released earlier this year to totally stand out, but it doesn't suffer much for that similarity.