Share All sharing options for: Meet the Iraq veteran helping to make an unconventional game about war

In November of 2004 seven U.S. Marine battalions and associated coalition forces began a bombardment. When the planes had finished their work and after the artillery had softened key objectives, a force of more than 13,000 began their assault under the cover of darkness.

The planners had given the operation the code name Phantom Fury, but later historians would come to call it the Second Battle of Fallujah, Iraq.

That battle, John Keyser says, was one of the most costly Marine engagements since the U.S. took Iwo Jima in World War II. And as a Navy corpsman he should know.

In 2004 Keyser was attached to the 1st Battalion of the 3rd Marine Regiment, part of 3rd Marine Division of III Marine Expeditionary Force. During the Second Battle of Fallujah, it was Keyser's job to put Marines back together, as best he could, while under fire.

It was his work with civilians in Iraq that drew him to This War of Mine.

"The very first casualty that I saw," he said, "was one of my closest friends; a hospital corpsman attached to another platoon. He was still alive when he got [to the aid station]. It was just one of those hopeless situations. There was nothing I could do."

But other sailors and marines weren't his only patients for the more than six months he was stationed in Fallujah. Oftentimes, he was called on to take care of Iraqi civilians as well.

"One of our primary jobs as corpsmen," Keyser said, "was to help Iraqi civilians — or whatever nationality they might have been. We treated civilian gunshot wounds. We treated all sorts of ailments that they had. We did what we could to help them, because it was our job.

"It that gave me peace of mind that some of our resources were being used to help people, rather than just bomb the living shit out of them."

It was his work with civilians, his memories of that time in his life, that drew him to This War of Mine, an upcoming game by 11 bit. The game aims to tell the story of war from the perspective of the innocents trapped inside it. It is a narrative adventure survival game unlike any other, where players shepherd a ragtag group of strangers and, with luck, help them to survive.

The game appealed to Keyser right away, because it was the first time he had seen his experiences shown in the hobby he loves. Shortly after he learned of the game the former corpsman volunteered to help 11 bit playtest it, free of charge. He's been helping tweak the game for months, a task that at times has been hard for him.

"I was diagnosed with chronic post-traumatic stress disorder in 2007 when I was discharged," Keyser said. "It's definitely manifested over the past few years. I've been married twice. I'm an alcoholic. There are lots of not-great things that have occurred for me mentally.

"My mind automatically goes back."

"[This War of Mine] is definitely very affecting. My mind automatically goes back. I played a build one time and I was kind of taking notes and I kind of had to say, ‘Okay. I'm not going to do this again for a couple of days.'"

Keyser believes that the message the game conveys is important for Americans to hear — especially veterans. Part of the goal of the work Keyser is doing for 11 bit is making sure this game is worth a veteran's time.

"From my perspective," Keyser said, "it's effective as a game. I am certain there are vets — probably a lot of my buddies out there — that will have a hard time sitting down to play this kind of thing. And that's what I think of too; is this game meaningful enough that other veterans might sit down and, regardless of how it makes them feel mentally, still push through? Is that going to happen? Will they still do it, even if it makes them feel a certain way?"

A war game that actually feels like being in a war

The kind of empathy games can bring about, Keyser said, can create a kind of experience that veterans might not otherwise get from modern games.

"I've been thinking that a game like this needs to be made for quite some time now," Keyser said. "Especially in the gaming climate with Call of Duty and things like that are really popular, this is kind of something that needs to be done.

"Every few seconds I'm thinking of how this place looked like a building that I've seen ... I'm automatically thinking specifically about Fallujah, about people who may have had to [take shelter where I was fighting], and my mind goes right there. We had to sleep in some of those ruined buildings as well."

While the team at 11 bit says that it's not making a political statement with This War of Mine, Keyser himself is no stranger to politics. Shortly after his discharge he joined the activist group Iraq Veterans Against The War, and later Veterans for Ron Paul. But today he's enrolled in Full Sail University's game design program.

He sees his work with 11 bit as a way to learn about the industry and support an artistic vision that matches his own worldview. 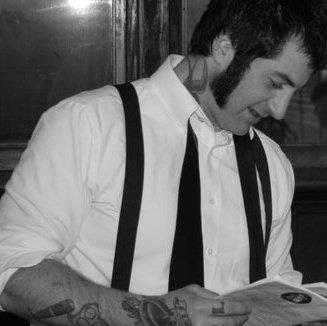 Today Keyser is a student of game design at Full Sail University.

With the help of 11 bit, and his ongoing studies, Keyser feels like his life is headed in the right direction.

"I was a chef for eight years following the service until I changed careers 2 years ago," Keyser said. "I am just really offering whatever 11 bit asks — testing early builds and writing on their blog. It interests me to be working close to these guys. It's helping me see the process."

Polygon visited the team at 11 bit and spent time to learn about what motivated them to make the game. A special Overview video chronicles our first few hours with the game.