Star Wars hype has burned us before

Share All sharing options for: Star Wars hype has burned us before

Hype is what gives a movie its power. It is an energy created by all beloved franchises. It surrounds us and penetrates us. It binds our galaxy together. But beware the dark side of hype.

Yes, I was like you, once; fresh-faced, hopeful. Back in 1999. Before the birth of social media. Before viral videos and transmedia marketing. Before ... the dark times ...

I have lived this day. I have walked in the warm glow of a great trailer. I have seen the desert sands spread out before me, looked deeply into a distant starfield and seen only rebirth and renewal.

And I have seen it all slip through my fingers.

Many of you were there, too. Have you simply forgotten?

You must remember seeing that first one-sheet poster, long ago, of young Anakin and his ominous shadow. You must remember learning about Padme, Senator Palpatine and the Gungans for the first time.

Have you forgotten what we went through that following May, on release day? Have you forgotten the wooden performances? The hackneyed plot? The strangely racist aliens and, years later, those poor, dead Jedi children?

Have you simply forgotten Jar Jar?

Don't you remember leaving the theater that day, poisoned by nostalgia and pledging to anyone who would listen how you planned to go back for another dose as soon as you could? How we deluded ourselves, in the months and the years after The Phantom Menace came out that it was the second coming of the franchise? How it was just as good as — maybe better than! — those other three movies made a long time ago, in a memory far far away?

Calm yourself. Let the hype flow over you, not through you, and see these past 24 hours for what they truly are.

Last night, during the weekly ritual that is Monday Night Football — when millions of football fans the world over were at their weakest and most inebriated — one of the world's most powerful media companies released upon a largely unsuspecting population a potent two-minute video designed to evoke nostalgia and good vibes. 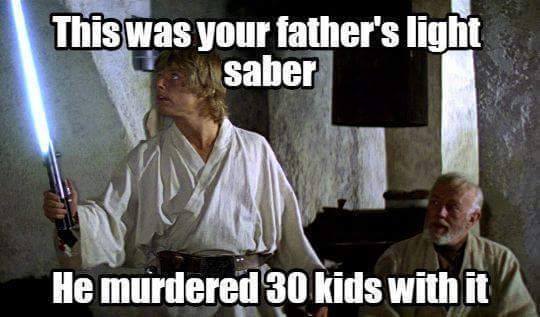 It's nothing more than hype, and it can only be described as one of the most sophisticated and calculated efforts in media history.

Why are we falling for this again?

Hype is the dark side. It seduces us. It whips us into a frenzy, while luring us into complacency. It makes us feel things we don't want to feel, and it blinds us of the truth.

The truth is we know nothing about how The Force Awakens is going to look on the screen. We know nothing other than what the Empire of Disney elects to tell us, nothing more than what we can piece together from an 18-hour marathon of product marketing.

It's not that I know the film will be bad, it's that I don't know that it will be any good.

No matter how hard we squint, we will not see The Force Awaken's potential failure coming until it is too late. And the stakes are much higher this time, for good or ill, because the original cast is involved.

Thankfully, there is another, but mark my words ...

It's not that I know the film will be bad, it's that I don't know that it will be any good.

The trailer for The Phantom Menace ranks among the best in a long line of great Star Wars trailers, but it's also a master class in marketing. Could it be the film industry has gotten even better at making trailers since then?

I hope that the new team behind the franchise is better than the last, but I won't get suckered again this time. At the end of the day, the only thing I wish for more than the strength to admit The Force Awakens is a failure is that I never have to.