The Flash recap: The Fury of Firestorm

Share All sharing options for: The Flash recap: The Fury of Firestorm

Some of The Flash's best moments came early in the series, when Barry Allen was just learning to tame his powers. Last night's episode, "The Fury of Firestorm," gives us another young hero to root for — a washed up quarterback named Jay "Jax" Jackson (Franz Drameh).

Professor Stein has been ill for weeks now, and the team at S.T.A.R. Labs suspects it's because the death of Ronnie Raymond has left him unbalanced at a cellular level. The solution they cook up is to bind him to another metahuman as quickly as possible. Dipping into their database, they find two potential matches.

The first is Dr. Henry Hewitt (Demore Barnes), an egotistical scientist who has always believed he was destined for greatness. The other is Jackson, whose football career was cut short when the catastrophic explosion at S.T.A.R. Labs two years ago threw him across the football field and tore his knee apart. In the years since the accident, he's become a mechanic. 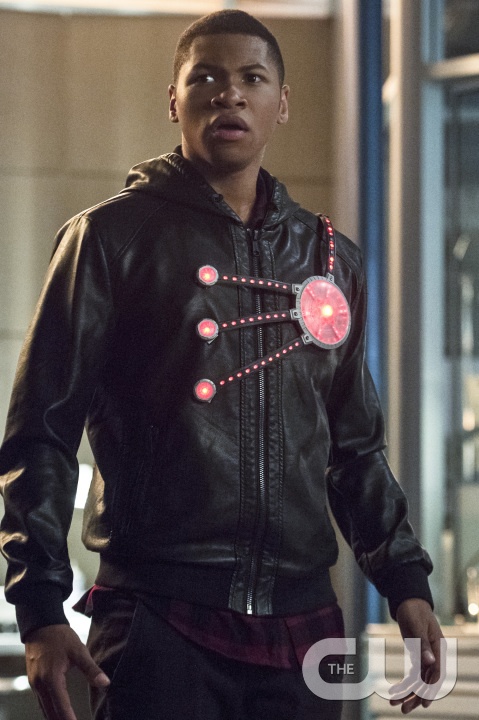 When Allen and Stein, walking with the aid of Cisco's improvised power cane, first wander into Jackson's garage, he's not buying what they're selling. Meanwhile, Dr. Caitlin Snow has already convinced Hewitt to converge with Stein. She seems completely blind to the fact that he's an egotistical jerk, and a poor genetic match to boot, instead choosing to focus on his resume.

"Clearly he’s trying to make something of his life," Snow says, blatantly disregarding how hard it is to maintain an A.S.E. certification these days. Her bias against the struggling mechanic plays out awkwardly throughout the episode, and at times her disregard for the blue collar guy is downright unsettling.

That weird little sociological drama aside, turns out the attempt to converge Stein and Hewitt is a bust. Hewitt leaves in a huff, only to rage out at work a few days later, sending arcs of Firestorm-like energy around the laboratory where he works. This gets him in trouble with Central City's police, and it's up to the Flash to hunt him down.

Eventually the team at S.T.A.R. Labs prevails on Jackson to bond with Stein, and the result is a perfect match. The convergence happens in the nick of time, saving Stein's life and putting Firestorm in the air once again to combat Hewitt who, poetically enough, plants himself in the middle of football practice at Central City High School to draw power from the stadium lights.

Jackson will need to save Central City on the same gridiron he played on during his glory days.

The episode's climactic battle sees him putting his innate athletic skills to good use. Freed from gravity, his torn ACL doesn't slow him down, and with Stein feeding him tips and tricks on the fly the pair make a potent team. Hewitt is eventually put down with a well-placed punch from Firestorm that lays him out at the 50 yard line.

But the episode doesn't end there. Iris finally confronts her mother, Francine West (Vanessa Williams) who claims she's dying from a disease she contracted while she was a drug addict. Iris has been using her reporter's skills to do some digging, and while Francine is telling the truth about her illness she's been holding back a huge secret — a son, who may be her younger brother.

Finally, last night's Flash had an amazing running gag that paid off big in the final scene. Early in the episode Patty Spivot brings Allen a bag of teeth that may or may not be from a metahuman who's half shark, half man. After Allen runs some tests, though, he's convinced they're purely human in origin.

Patty's a little disappointed not to have uncovered another metahuman, but not nearly as disappointed that Allen won't give in to her relentless flirting.

There's a moment, just before the credits roll, when Allen finally comes to his senses. Dashing through Central City's streets to clear his mind he eventually ends up in front of the coffee shop where Spivot is working late into the night. He smiles, takes a step, and is just about to whip off his Flash costume and sit down to a long-delayed, romantic cup of coffee when ...

A giant shark man tries to bite the Flash's head off.

King Shark, dripping with gore, leaps from the shadows. The 20-foot tall beast, revealed without explanation, picks Flash up in a massive gray paw and opens wide. Spivot rushes to rescue him, but her rounds bounce off the creature. He drops the Flash, unconscious, to the ground, and marches on Spivot.

That's when Dr. Harrison Wells leaps from another shadow and shoots King Shark in the back, bringing him down. The episode ends with Flash and Wells staring each other down in the middle of a deserted park.

It's a great setup for next week's episode.

I just have three questions: What in the world was Jay Garrick doing during all of this? Is anyone going to close the damned wormhole? And how much is Threadless paying to clothe Cisco?

Looking to catch up on all the episodes of The Flash from this season? We've got you covered here.