The hype is still building for Star Wars: The Force Awakens, and with Halloween just around the corner, is it any wonder that Episode VII-themed outfits are flying off the shelves? No. No it's not. What's remarkable, however, is how good they look. 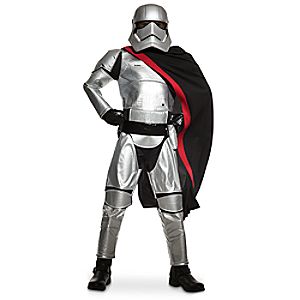 Back in the 1983, you could saunter into your local Toys R Us and plunk down a whopping $4.49 for the Ben Cooper company original. By the end of the night, if you hadn't scratched off your cornea or asphyxiated inside the equivalent of a screen-printed Hefty bag, you could hang that terrifying, misshapen faceplate on your bedroom door ... until your mother got sick of it, and eventually threw it away.

But today's officially licensed Star Wars Halloween costumes are something else, at times more toy than disposable dress-up clothes. Costumes for both kids and adults alike are flying off the shelves, causing many online retailers to be sold out. Thankfully, it looks like Amazon still has a bumper crop available for delivery before Saturday.

We've rounded up some of the season's best costumes, for kids and adults:

First up check out this amazing adult Captain Phasma costume from The Disney Store, complete with a resplendent red-trimmed cape.

Kudos to the House of the Mouse for correctly putting this one in the girls section.

Next up is Finn, also available in kid and adult sizes. These aren't showing up on The Disney Store site, but they are available on Amazon and several deluxe sets include a fancy white and orange laser carbine. And while shoe covers never quite work out, you could probably just trim those off.

There are a few flavors of Rey costumes, both with and without a staff. The one at The Disney Store seems the most posh however, and comes with some dashing green-tinted goggles.

Even if you don't drop the money on costumes for this weekend, these are all great ideas for cosplay when the movie is released in December. Although, I don't know if a clearance sale will be in our future for quite some time yet.