It's early in Los Angeles and Jill Marie Jones is tired as she talks to me over the phone about the premiere of her upcoming show, Ash vs Evil Dead.

She's just returned from New York Comic Con where she was promoting the show with fellow cast members. Still, the press storm rages on as she schedules interviews every 15 minutes. Despite the hectic scheduling in the final days leading up to the series premiere on Starz, Jones is having the time of her life.

"Evil Dead fans are the best in the business," Jones said laughing. "They kind of put their bloody hands around me and made me feel so welcome."

Jones — who plays Detective Amanda Fisher in the series — admitted that, while she was excited to join a franchise as beloved as Sam Raimi's Evil Dead, she was nervous about the reaction from fans. Although never reaching the level of box office success Raimi hoped for, The Evil Dead has become one of the most beloved cult series, building a gigantic, and extremely dedicated fanbase. When it was announced at Comic Con that star Bruce Campbell would be returning to the series to reprise his iconic "groovy" character, Ash, the internet erupted in cheers.

"Fans have been waiting so long for this and I wanted to do them proud," Jones admitted. "I wasn't nervous to work with Bruce, but I was nervous about how fans would react to me and my character."

Jones describes her character Fisher as a gritty and "badass" officer who's seeing demonic creatures that others are not. While trying to put the pieces of the puzzle together and figure out what's going on, she's introduced to Ash and learns of his violent history dealing with creatures of the underworld.

Until she was cast, she admitted she has never seen an Evil Dead film, but was familiar with them. Before they started production, she binged all three movies and said doing so gave her an appreciation for working with Campbell. 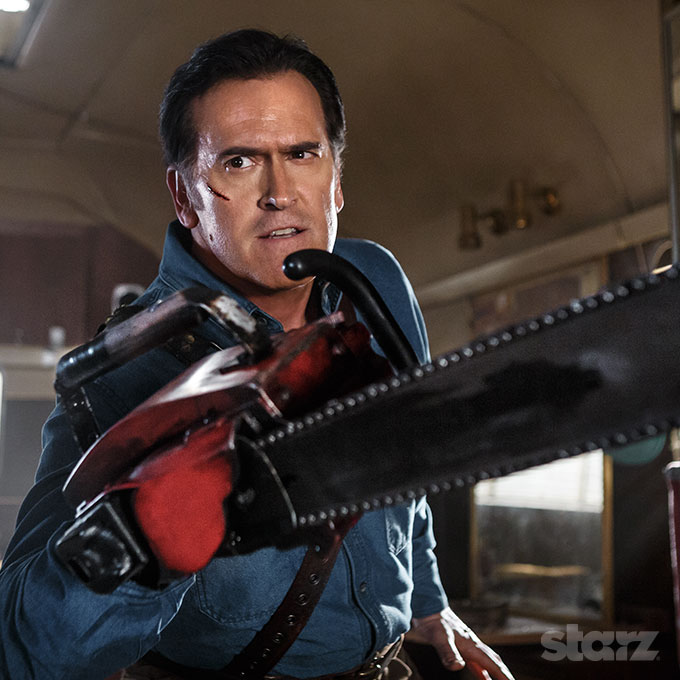 "Bruce is so welcoming and loving that it's impossible to feel nervous around him," Jones said.

"And Sam Raimi [who's returning to helm the series] has such a gentle touch as a director. He works you hard to get what he needs, but he makes you feel like you're involved in the process the entire time. It can be tiring to shoot running scenes again and again, but he makes it a lot of fun."

Adding to that sentiment, Jones said Fisher is a role that requires a lot of physicality, and her experience working on genre shows like American Horror Story: Asylum and Sleepy Hollow helped her prepare for the role.

"Those shows were my introduction to horror, and I learned a lot from them," Jones said. "But the main difference is that with Ash vs Evil Dead, I'm in the middle of the craziness instead of just watching the craziness from the outside."

To make sure she could handle the part, Jones said the audition process was one of the strangest experiences she's endured while working as an actor.

"I'm running and jumping around in this office, shooting things that aren't there, turning a corner that's not there, flipping a light switch that's not there," she said, describing the audition. "They really wanted to see the action in person. They had to know that the person they cast would be believable when they were shooting a gun and kicking ass."

When preparing for the audition, and looking for inspiration for her character, Jones said she channeled someone incredibly close to her.

"My mother was a federal investigator for almost 40 years and there's a lot of her that I tried to put into Amanda," she said, admitting that it made her feel closer to her character.

"My mother is a living, breathing example of what a woman can do and how strong and fearless we can be."

Having a cast of incredibly strong female actors — including Lucy Lawless (Battlestar Galactica, Xena: Warrior Princess) — was just one of the main reasons Jones was drawn to the show, adding that she loved how Amanda could be a badass cop in one scene and have a "beautiful, vulnerable human side" in the next.

At the time of the interview last week, Jones didn't know if the show was going to get a second season, but said she'd love to play Amanda for as long as she could. On Wednesday, however, Starz announced they had renewed the show for a second season ahead of the show's pilot debut.

Ash vs Evil Dead premieres at 9 p.m ET this Saturday on Starz