Dragon Quest Heroes isn't a game I expected to work half as well as it does.

Not unlike last year's Hyrule Warriors, the concept behind Dragon Quest Heroes: The World Tree's Woe and the Blight Below is to take the formula of the long-running Dynasty Warriors series of beat-em-ups, and apply it to a new and seemingly ill-fitting franchise. In this case, that franchise is Square Enix's Dragon Quest, a Japanese role-playing game series that's been a staple of the genre since 1986.

So Dragon Quest Heroes is a slow, epic role-playing game crammed into the shape of a lean, seemingly shallow action title. It exchanges the fantasy of methodical turn-based combat against a small group of opponents for slashing through hundreds of enemies a minute. It seems at odds with itself.

It's also a blast, far and away one of the most interesting games to come out of the Dynasty Warriors mold. 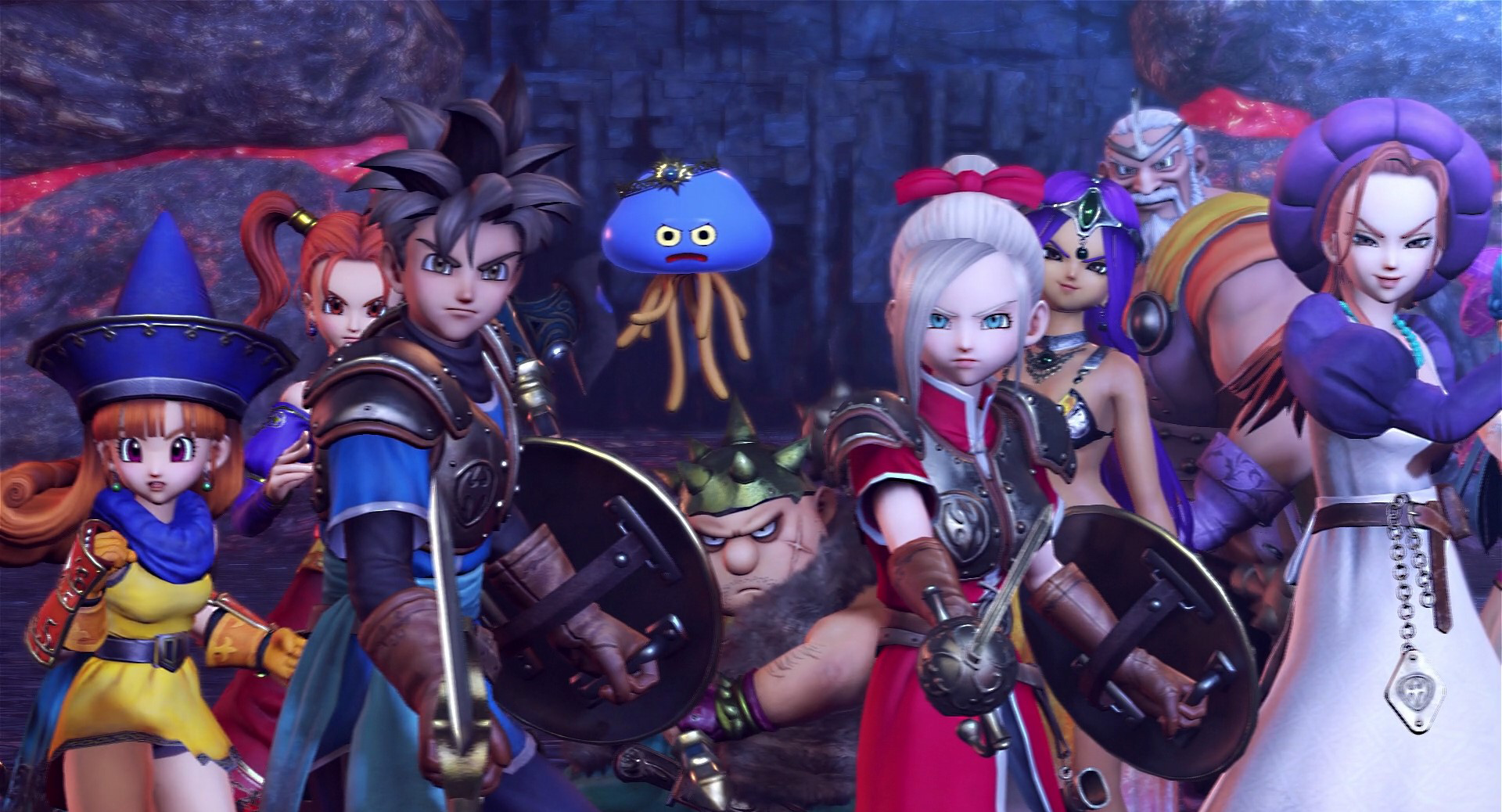 Dragon Quest Heroes opens on the kingdom of Arba during a festival. It's a world where monsters and humans live together in peace; in the opening movie, a giant golem sweetly hands a little girl balloons to her delight. The first glimpse of Arba is immediately endearing, but a world of peace is not a great setup for a game about killing legions of monsters, so inevitably things go wrong. The monsters inexplicably turn on humans, and more bad guys begin pouring out of portals opening around the city.

You begin the game by naming the two main characters — one male, one female — and choosing who you'd prefer to control by default. These two are members of the city guard. They team up with the king, Doric, on a journey to discover just what the hell is going on before the enraged monsters rip apart the roots of Yggdrasil (the titular World Tree).

The journey around the world is mostly an excuse to fight monsters in a variety of locales and track down new party members who are actually characters from previous Dragon Quest games. Heroes such as Dragon Quest 8's Jessica and Yangus and Dragon Quest 5's Bianca add a healthy dose of nostalgia for players who are well-versed in the series.

They also emphasize how generic Dragon Quest's characters are. Frankly, there just aren't that many meaningful differences between the heroes of the different Dragon Quest games. There are a few standouts — Dragon Quest 6's egotistical swordsman Terry and Dragon Quest 4's Russian-accented princess warrior Alena — but most of the party members are stereotypical good guys who are out to save the world because ... well, they're good guys, and the world needs saving.

Dragon Quest Heroes wisely spends most of its time focused on humor above drama. My favorite bit is a running gag where the male lead tries to detail sprawling, complex battle strategies, and the female lead constantly shuts him down in favor of running in with blades swinging.

That repeated joke sequence is also a perfect analog for how different Dragon Quest Heroes is from the average Dragon Quest game. Most of your time in Heroes is spent fighting, not talking to townspeople or looking at stat sheets. And the combat is fast, flashy and fun.

The basic mechanics of Dragon Quest Heroes are incredibly simple and familiar to anyone who has played a Dynasty Warriors game. You have two attack buttons, one for heavy attacks and one for light, that can be strung together in combos. Bigger combos fill a meter known as "tension," and once that's full your character can pull off super powerful moves that can wipe out an opposing army in seconds. Dragon Quest Heroes also adds a tiny wrinkle to this formula with the addition of spells — by holding down a trigger, characters can cast a variety of established spells from the series.

The moment-to-moment combat in Dragon Quest Heroes can feel brainless, but I found an undeniable spark of joy in it nonetheless. There's something wonderful about the flow and sense of power that this formula provides, even if it's a far cry from the tactical, turn-based combat that Dragon Quest is known for.

Dragon Quest Heroes also benefits from its franchise bestiary. Instead of fighting legions of the same nameless soldiers, Dragon Quest's bestiary provides dozens of different monsters, many of whom force you to modify your strategy (if only slightly) as you go. If you just mash buttons into a knight holding up a giant shield, your attacks are not going to have much effect. Flying enemies require waiting until they've lowered to the ground to unleash your attacks. And certain giant enemies, like cyclopes and trolls, can be difficult to defeat unless you use strategically placed cannons on the battlefield to weaken them.

Dragon Quest Heroes can feel brainless, but I found an undeniable spark of joy in it 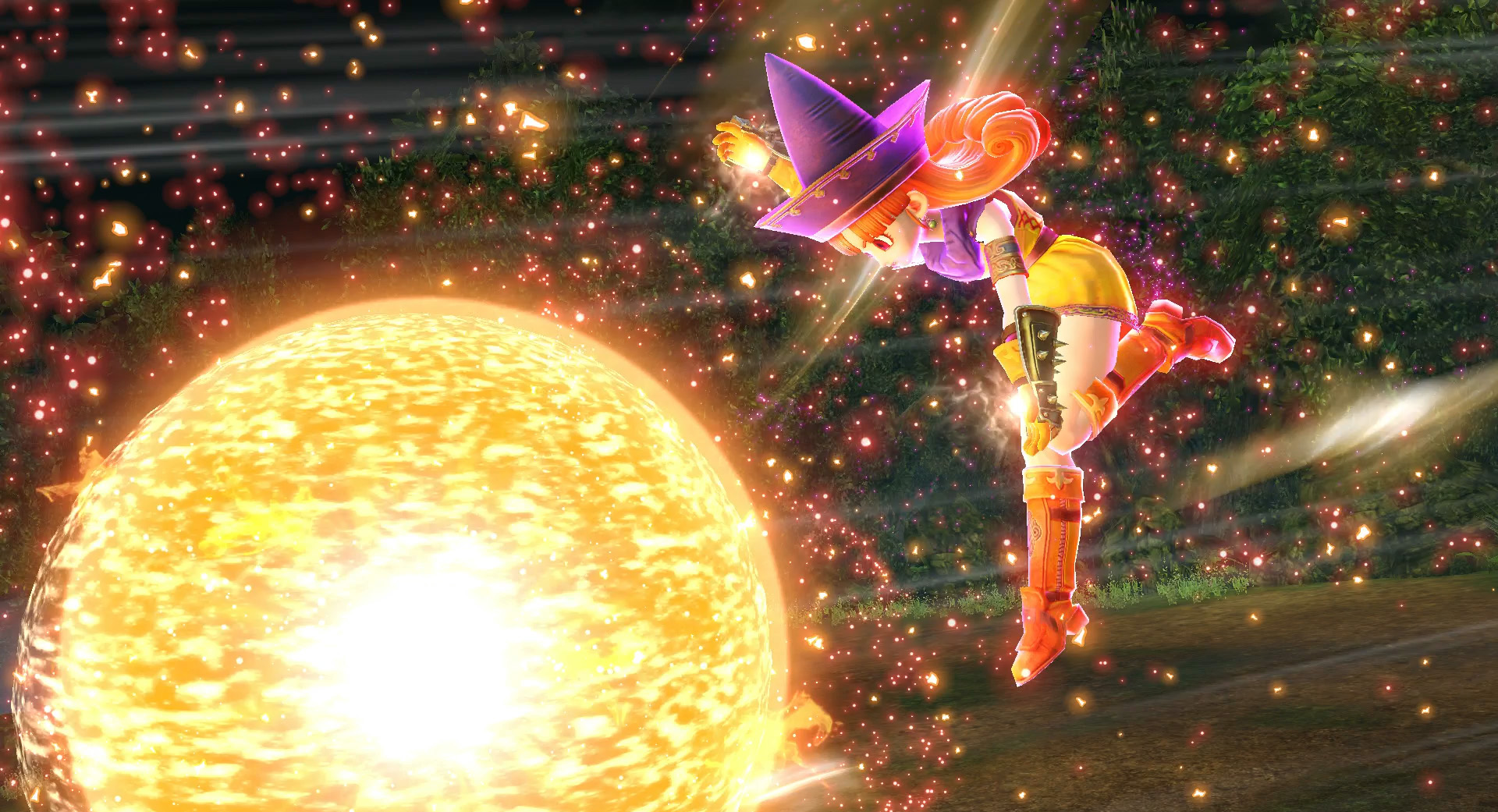 These are small shifts, but they're enough to shake things up. A final dash of depth is layered onto Dragon Quest Heroes' combat scenarios in the form of objectives that need to be defended. While a few levels are straightforward, kill-em-all crawls through huge groups of enemies, most will task you with defending a set location, whether that's a Yggdrasil root in danger of being destroyed or an important character who needs to stay alive. This stands in contrast to the traditional Dynasty Warriors formula, which mixes in occasional defense objectives but mostly focuses on pushing forward and capturing new territory.

Defense objectives completely change the momentum of a stage in Dragon Quest Heroes. Instead of running around thoughtlessly mashing on buttons, you now need to pay careful attention to the movements of each wave of monsters. I found myself agonizing over whether I should stay and clear out the latest batch of enemies, or leave that task to my allies and rush ahead to try to shut down a portal and halt the advance of future waves. As the game progresses, the levels grow bigger and more complicated, making these moment-to-moment decisions about where to focus your efforts ever more challenging.

The balance that Dragon Quest Heroes walks between trivial fun and deeper strategizing is precarious. At any point in the 30-plus hours I played, I felt like it could have tipped over, leaving a boring, button-mashing shell of a game. Amazingly, it never did. Developer Omega Force has, perhaps more than ever before, found a winning combination of empowering players to wipe out thousands of foes while still challenging them to think and pay attention to the refreshingly colorful world surrounding them.