Jessica Jones has a hidden superhero

Share All sharing options for: Jessica Jones has a hidden superhero

And no, it's not Luke Cage, slated for his own series, and it's not a cameo from Daredevil or any other previously established superhero or agent of SHIELD. It's Patricia "Trish" Walker, played by Rachael Taylor and billed in Netflix's promotional material as Jessica's best friend and a successful talk radio host. Her character plays an incredibly vital role in keeping the story of Jessica Jones from being altered by the new context in which it sits: a Marvel Universe where there are no famous female superheroes. 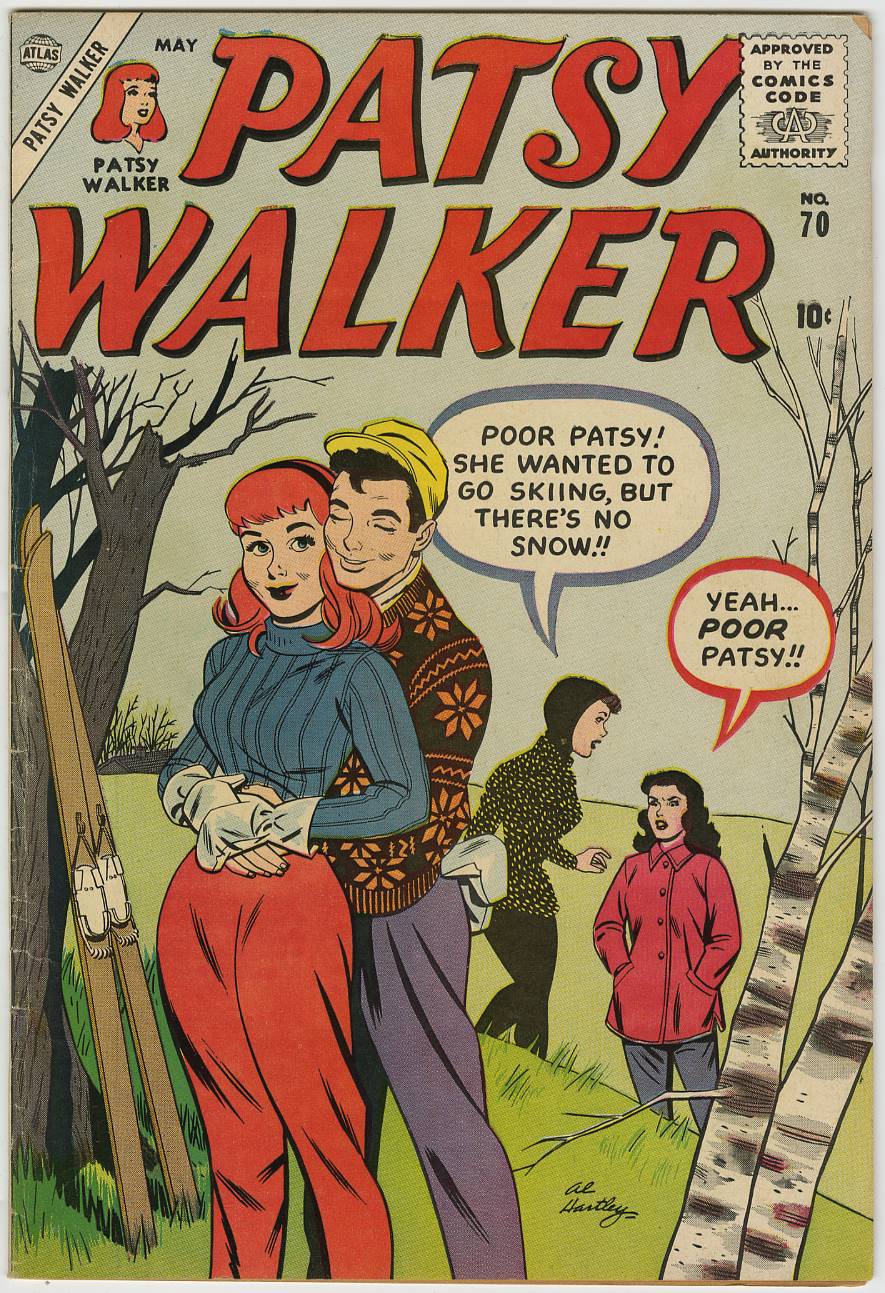 But the story of Patricia Walker as a comic book character is pretty fascinating in and of itself, and to explain that we have to go back to the 1940s — a period that predates, by decades, the creation of most of the characters who we consider to be the core of the Marvel Universe. It was a time when Marvel Comics was still known as Timely Comics, and it was a time when teen-rom-com comics were as big a sell as superheroes. Archie Comics' line is one of the few survivors of what was once a thriving comics genre all its own, but in her heyday, Patsy Walker was a lot like a female version of Archie Andrews — or what Archie comics would have been like if Betty or Veronica was the real star.

Patsy was created by the pioneering female cartoonist Ruth Atkinson, and her early stories were written and drawn by Al Jaffee, the creator of Mad Magazine's "Fold-In," and Al Hartley, who would go on to write for Archie Comics. That peerless pedigree paid off, with Patsy growing in popularity until she was appearing in a number of Timely's teen titles, not to mention her own eponymous series and several spinoffs, much like a certain redheaded heartthrob we could mention.

But, by the mid-60s, sales were waning all over the comics industry as the medium struggled with a changing America and draconian industry content codes. Patsy last appeared in a teen-humor comic in 1967.

But there's a twist

Two years before her "final" appearance, Patsy Walker had made a cameo in the 1965 Fantastic Four annual, establishing that she lived in the Marvel universe. You can probably already see where this is going.

In 1972, Steve Englehart — a writer/editor responsible for some of the bigger, crazier events at Marvel in the 1970s — reintroduced Patsy as the martial-arts-based superheroine Hellcat. She would eventually go on to join the superhero team known as the Defenders, which is exactly the team that the eponymous stars of Marvel's various Netflix series will eventually form.

wait, it gets better

In her appearances alongside the Defenders, it was established that in her civilian life Patsy is a minor celebrity due to the fame of the comic books her mother had written about Patsy's own childhood. This means that all of those Patsy Walker comics everyone had been reading in the '40s and '50s were also published comics within the Marvel Universe. And she's about to get more, since she'll be starring in her first ongoing series, Patsy Walker AKA Hellcat, next month.

So who is Patricia Walker in Jessica Jones? Well, textually, she's a successful radio host, a former child star and Jessica's best friend, foster sister and closest confidant. When Jessica decided that she should use her powers to help people, Trish was her biggest cheerleader. (She's also a replacement character for Carol Danvers, who filled the role of Jessica's superhero best friend in the comics, but who is unable to appear in the show due to having her own movie on the way in 2019.)

If you haven't watched the first few episodes of Jessica Jones yet, you might want to back out now or risk reading some minor spoilers.

If there was one thing that worried me about adding Jessica Jones to the Marvel cinematic universe, it was that such a move would remove her from a universe in which she was merely one of dozens of prominent female superheroes. In fact, it would make her one of only three female superheroines — Jessica, Black Widow and the Scarlet Witch — and one of only two who actually have superpowers.

Trish is training. She's equipping herself. She's preparing for war

In the Marvel comics universe, Jessica was an exception as a superhero and as a female superhero, a person who'd never fit into superhero society and had suffered the consequences, a character who subverted the common and dominant tropes of her setting. But in the Marvel Cinematic Universe, where Earth's population of successful female costumed crime fighters consists entirely of a mere two reformed villains, Jessica's story loses that vital context. And that reframing makes Marvel's first show or movie about a female superhero one about a woman who failed to become a superhero.

But that's where Trish Walker comes in. A few episodes into Jessica Jones it's revealed that after Jessica's attempts to become a superhero failed, Trish decided that even if she doesn't have superpowers like her foster sister, there's no reason she can't be a superhero. She's training. She's equipping herself. She's preparing for war. And she's not doing it because she has a traumatic past — although her childhood wasn't exactly sunshine and rainbows, we find out later — she's doing it because people need to be helped, because good things need to be done, and because there's no reason why it can't be her doing the helping and the things.

That's a purer superhero archetype than any of the other conflicted, traumatized leads of the Netflix/Marvel television shows. In fact, it's a purer motivation than some of the Avengers, who are in it to redeem themselves or to fix the problems they created or because they didn't have much of a choice. That's Captain America-style selfless motivation. Heck, that's some Superman motivation.

Trish Walker gives Jessica Jones back that context of existing in a wider world of classically heroic women, and in doing so, makes a very strong show even stronger. A few weeks ago, I would have told you that I didn't expect her role to be much bigger than the typical "civilian sidekick" in first season of The Flash or Arrow, and now I'm wondering if, by the time I'm done binging on the last six episodes of Jessica Jones this weekend, I'll have seen Trish suited up in yellow and blue. Frankly, I couldn't be happier about it.

Everything you need to know about Netflix's Jessica Jones