The most important part about the resurrection of the Industrial video game/plastic instrument complex in 2015 wasn't that Guitar Hero and Rock Band were resurrected within weeks of each other. It wasn't new songs, new features or an extra row of buttons, either. It was the cross-platform experiment Activision created with Guitar Hero Live that might just show the future of gaming to anyone willing to pay attention.

The experiment works. It's not without compromises, but they are significantly less than they ever were before. Guitar Hero may have been born on video game consoles, but in 2015, it's just as good on Apple devices — and in at least one way, better — than it is on the PlayStation 4 and Xbox One.

From there to here

From its inception, Guitar Hero has been a console game first. Yes, there were mobile and tablet versions, but they were explicitly dumbed down and tailored to the more limited platforms. The Guitar Hero Mobile series is filled with relatives of the proper console versions. You could play something like Guitar Hero on the go, but you had to sacrifice your plastic guitar for your fingers and clicky buttons for sliding and tapping on a touch screen. 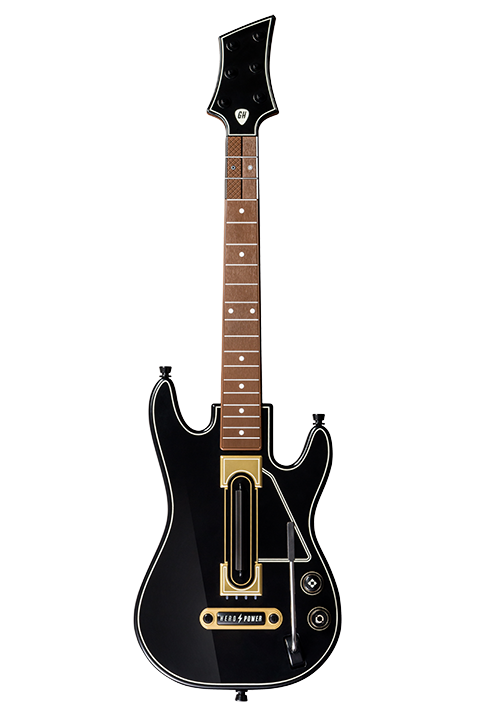 In one sense, that remains almost exactly the same in 2015. And why wouldn't it? If you have a relatively new iPad, iPhone or iPod Touch, you can download Guitar Hero Live from the iOS App Store and get to tapping along to the songs that appear on its PlayStation 4 and Xbox One counterparts. It's business as usual, really, and it was easy to see coming.

It was a lot more difficult to see Guitar Hero's new thing: If you buy a plastic guitar designed for iOS, the game metamorphosizes.

A $99 bundle available at electronics stores and even mobile phone carriers like T-Mobile includes a Bluetooth-enabled plastic guitar indistinguishable from its console cousins. Pair it with your iPad or iPhone, and Guitar Hero Live transforms into the full version of the game. It doesn't end there, though.

Guitar Hero Live is also available on the new Apple TV. It's is nearly indistinguishable from the PS4 version.

Even better for those who fill their world with Apple devices, Guitar Hero Live is built on iCloud's back end. Using Apple's technology, the game syncs saves in the cloud. And that's a benefit to players because Guitar Hero Live doesn't care if you're playing on an Apple TV, an iPad or an iPhone. Your save game information syncs and your songs are unlocked across all devices using your Apple Game Center account.

We've played Guitar Hero Live on PS4 and each of Apple's devices. Here's the craziest part: No matter what screen you look at when you want to rock out, Guitar Hero Live works really, surprisingly, kind of incredibly well.

iOS: Guitar Hero Live on the iPad and iPhone

Guitar Hero Live's free version on iOS is a perfectly capable version of a type game you've mostly seen before. Even before Guitar Hero or Rock Band went mobile, Tap Tap Revenge was an early gaming success for iOS. It helped to prove the platform's capabilities with gameplay inspired by the console hits.

You can download Guitar Hero Live free from the iOS App Store, but you'll get only a sliver of the full game. Its Trial Version, as the splash screen calls it, includes a couple of free songs.

The presentation is tailored to the device it's running on.

On an iPhone, it only plays in portrait mode, which accentuates the highway of notes that constantly flow toward you. The note highway fades into oblivion, leaving about a third of the screen to display the full-motion video that plays over every Guitar Hero Live song.

Guitar Hero Live with a controller on an iPhone 6 Plus

On an iPad, the highway overlays the video, though the 16:9 video gets shrunken to fit within the tablet's 4:3 aspect ratio.

In touch mode, the game's user interface changes. It trades the black and white guitar pick-like notes that float over the highway on console versions for a classic presentation of notes that rest on the ground.

In short, if you've played an iOS version of a popular rhythm game, you'll know what kind of gameplay to expect. If you like it, you can pay to unlock the full setlist.

If you buy the iOS guitar bundle, you don't have to pay to unlock anything. The price of the full setlist is built into the $99 hardware bundle. Pair your controller with an iOS device, and the Trial Version becomes the full version of the game, with access to the shows and songs in the campaign, as well as Guitar Hero TV, a mode that expands the list of available songs, streamed in front of their music videos.

The presentation is still tailored to the device just like in touch mode, but the floating guitar picks of the console versions arrive and replace the touch-based versions on the highway. If you want to switch back to touch mode, that's available, too. Or if you have a cable to hook your iOS device into a TV via HDMI, you can play it on the big screen.

How does it play on a portable device with a controller? Exactly like Guitar Hero Live on a console. On my iPhone 6 Plus and my iPad Air, it's the same game I've played for hours on PS4, except smaller. On the Apple TV, Guitar Hero Live is just like the console versions.

Guitar Hero Live proves that, in late 2015, smaller no longer requires significant compromises. And the Apple TV's version is, in almost every case, indistinguishable from my PS4 version. And it comes with a curios exemption from Apple. Despite Apple's developer documentation, which stills says that all games must use the Apple TV's touchpad-equipped remote, Guitar Hero Live informs anyone who finds it in the tvOS App Store that this game requires the plastic guitar peripheral.

But “no significant compromises” isn't the same thing as “no compromises.” Apple's platforms require some concessions that make Guitar Hero Live a slightly different beast when it's not on a proper game console.

Not all at once

Because of Apple's app size limitations, Guitar Hero Live won't live on your device in its entirety.

If you buy Guitar Hero Live for PS4 or Xbox One, you'll get the game's setlist when you download the game or install it from a disc. Its Apple TV and iOS versions keep a limited amount of resources on a device. So you'll run into a scenario in which, the first time you play a song, you have to download it. On a console it'd be right there — either on your hard drive or streaming off a disc. On Apple devices, the time it takes to download depends on your connection, of course, but with broadband or LTE, it took about a minute per song. It's not an extreme inconvenience, but it is one nonetheless.

Guitar Hero Live with fingers on an iPad Air

On the upside, that saves space for other things to live in internal storage. It's a disadvantage over the other systems, certainly, but not annoying under normal circumstances.

Guitar Hero Live also appears to conserve space by streaming some (if not all) of its video to the device, rather than downloading and saving it. The gameplay never suffered by dropping framerate, for example, but I have seen situations on the Apple TV where the FMV in the background of the campaign was clearly downgraded into a pixelated mess. If it has to compromise, that's a fine place to do it. Dial back on the frills, not the gameplay.

Playing on my iPhone and iPad is really impressive, but you've got to make some allowances for those devices. My iPhone, for example, gets a fair amount of notifications, and it's super weird to see them appearing from the top of the screen. These devices can play games that look great, but if you'll want to disable notifications temporarily for a seamless experience.

What you won't want to do is turn Airplane Mode on. Guitar Hero Live won't work without a server connection. This is the price users must pay for portability.

In our Guitar Hero Live review, we called it “clever and innovative in ways that no one other than FreeStyleGames ever imagined.” Its versions on Apple devices continue that innovation.

The rise of the smartphone changed handheld gaming. Mobile and tablet gaming are immensely popular. Many Android and iOS games are created specifically for those devices. Some games are ports from consoles or PCs. And as devices become more powerful, the lines between systems are getting blurrier.

Guitar Hero Live is certainly not an immense graphical powerhouse. But that it looks so good — and often indistinguishable — on a cell phone feels like more than blurring lines. It feels like the next phase of evolution in portable gaming.

Think of it from Activision's perspective, too: The game's limited to those who own or will buy a current-gen console. As popular as the PlayStation 4 and Xbox One are, there are far more people with iPads and iPhones — and far more potential customers. Activision already has to convince potential customers to spend $99 on Guitar Hero Live in addition to the hundreds of dollars they've already spent on a console. But if you already have a tablet, a (likely subsidized) phone or a $150 Apple TV, the game is there for you, too. It's cheaper than spending $300 or more on a console first.

Whether or not a significant amount of people really want to buy and play Guitar Hero Live on their Apple TVs, iPads or iPhones remains to be seen. As remarkable as the iPhone version may be, and as good as it sounds through headphones, it's still playing on a phone. It's not the ideal way to play.

But it's safe to assume that Activision thinks there's potential in these platforms. That's why I can play Guitar Hero Live on the tiny computer in my pocket. Or I could download and unlock the game for free on my iPad and book that up to my friend's TV. Or I could just bring my Apple TV, which tiny and portable. My saves and songs will be right there, wherever I choose to play. It's hard not to see the future in functionality like that.