13 Fallout 4 tips for everybody

Fallout 4 is hard. This should help

Share All sharing options for: 13 Fallout 4 tips for everybody

The wasteland can be a hard place to survive, and the Commonwealth in particular is full of dangers.

This is a flowery way of saying Fallout 4 is hard, and it's going to kill you a lot if you're not careful. And also even if you're careful. With that in mind, we thought we'd give you some basic, broadly applicable tips to make your life a little easier out there, whether you're new to Bethesda's open-world games or have been counting the days to Fallout 4 since Skyrim.

Survive the Wasteland with our Fallout 4 walkthrough

Fallout 4 communicates in a lot of ways, but its clearest voice is always death. Death can mean a lot of things in Fallout 4, but if you die and lose more than a few minutes worth of progress, what the game is telling you is to save more often. You can increase the frequency of your autosave in the options menu, which is great, but remember that this setting only applies when you go in and out of your Pip-Boy. But good news! Quicksaving is available in the pause menu and is incredibly fast.

Also, maintain a lot of save files. Our friend Chris Plante wrote about the great time he was having in Fallout 4 until he found himself stuck in an elevator after multiple in-game glitches. This is awful, and ideally it won't happen. If it does, the best way to fix it shy of a massive social media campaign is to save often, and maintain staggered saves. This means you should select "create new save" in the save screen. This could be the difference between losing 20 minutes or losing everything.

There are perks for different kinds of weapons that give them better damage and effectiveness, so it doesn't hurt to pick one based around the best weapon you find early. The 10 mm pistol is useful for a long time, so points in pistols early can't hurt.

If you get into trouble, or see an enemy you don't think you can kill, use Fallout 4's new sprint function to get the hell out of there. And don't be cute and use VATS to try to kill it with a critical hit — VATS and sprint use the same meter. Also, don't worry about your companion if they keep starting fights. Eventually they'll get away and come back to you.

4. You can keep the mods from weapons you find ...

... but only if you take them off a weapon before you scrap it. You can also take mods off weapons you find and put them on weapons you already own — including "legendary" gear you find on legendary bosses. 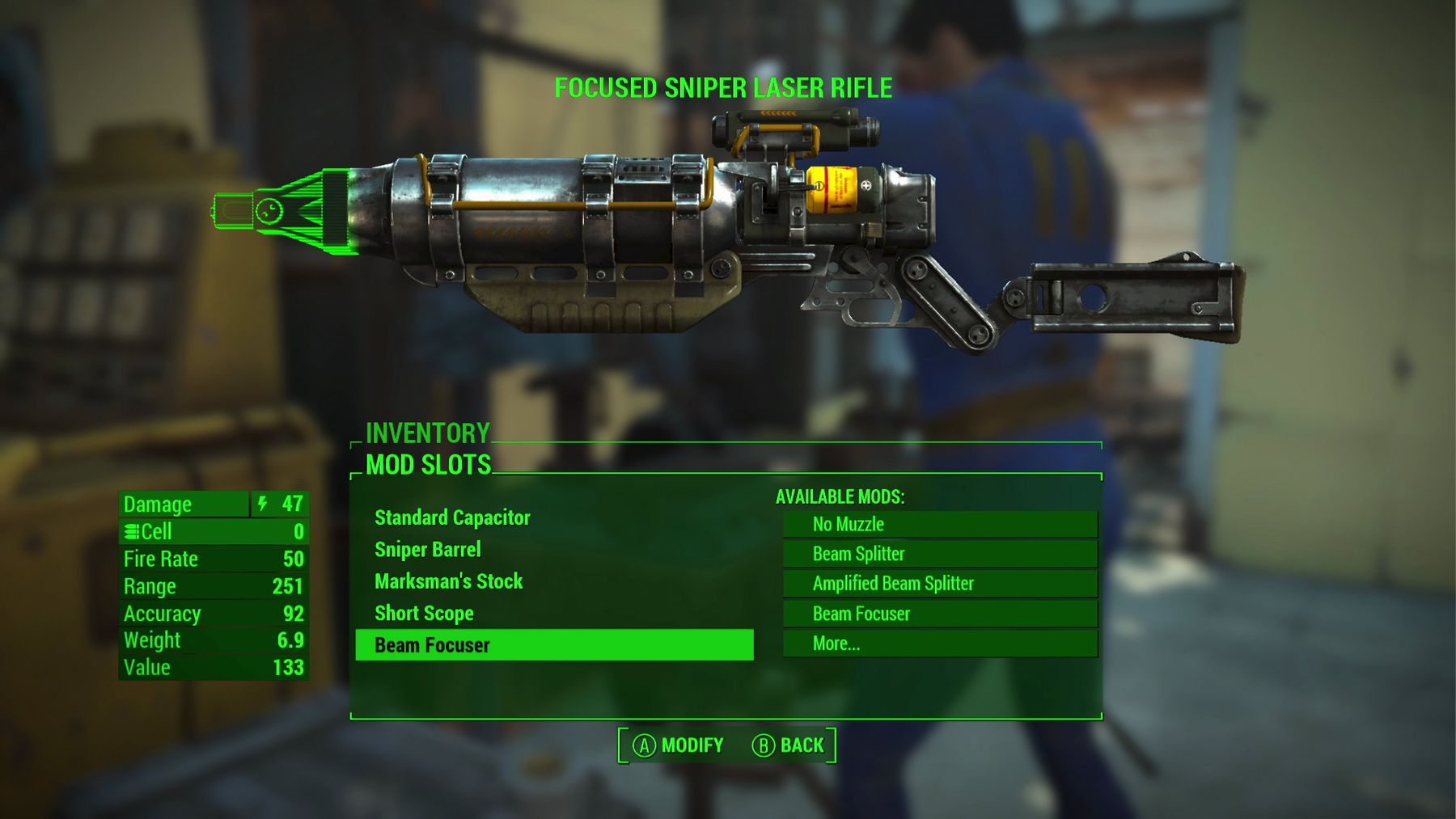 If your inventory is full and you can't fast-travel, take Buffout — it'll increase your strength long enough to finish your sweep through whatever location you're in, and allow you to fast travel back to your base. No Buffout? Drink alcohol, which will also give you a strength boost, albeit a lower one.

6. Chems (and gear) can make you more charming

Conversation options are unlocked with a higher Charisma score, and you can increase your chances to succeed on your conversation rolls with gear. Sunglasses up your Charisma, as do some suits, and the drug Daytripper gives you a full +3 to your checks. But an important note: You don't get headgear bonuses while wearing a Power Armor helmet. You'll need to unequip the helmet, then re-equip the glasses.

7. You can pause — and save — during conversations

If you're determined to successfully use special conversation options, remember that you can now save (and quicksave) during dialogue sections. If you fail your conversation check, you can reload and try again.

8. Mods you craft are heavy, and you're probably carrying them around with you.

When you craft new weapon mods, the parts you replace go into your inventory. This adds up over time! You may be able to dump 50 pounds of weight if you store your mods in the workbench instead.

9. You can create display cases.

This isn't as important, but you can build a case to store your bobbleheads, and a magazine rack for your magazines. I just think they look cool.

10. Large debris in settlements is valuable

You can clear debris and many objects, including ruined houses, from your settlements in the workbench view. Not only can you free up space for bigger projects, you can get huge quantities of material like steel and aluminum this way.

On that note: Running in Power Armor depletes its fusion core very quickly. Don't do that. Also remember that you can sneak in Power Armor, and one of the more effective means of finding fusion cores is by bringing down enemies wearing Power Armor.

12. Pre-war money is valuable! And it's also junk.

The cap-to-cash exchange rate is extremely high, but watch out — hitting the "dump all junk" button in the workbench will remove your pre-war cash, too, as it breaks down into cloth.

If there's a powerful enemy far away that a critical hit would likely cripple or kill, target them in VATS and once you begin the firing sequence, hit the critical button. This works especially well with sniper rifles against legendary monsters — and if you do enough damage to kill a legendary monster before it hits the 50 percent threshold, it won't mutate and regain all its health.