Star Wars: The Force Awakens' geekiest secrets are hidden in the toy aisle

Share
Tweet
A short time ago, in a strip mall fairly close by, we went looking for the truth.

With mere days to go before the seventh episode in the Star Wars series drops from orbit, Polygon visited the toy aisle. Our mission was simple: to gather up all the discarded bits of information, the soft leaks hidden in the molded plastic shells taking up space at every major retailer in the country. What we found was pretty interesting.

Nothing earth-shattering, mind you. But there's enough juicy information here to serve as a decent field guide to the movie, a little bit of intelligence on the new troops and vehicles that you and your kids will be flying around the living room for the next decade or more.

How to tie a TIE

Let us begin with the humble Twin Ion Engine starfighter — or TIE fighter — mainstay of the Empire since 1977. In the fiction of the first three movies, these sandwich-shaped ships may as well have been made out of tinfoil and filled with acetone. Getting hit with a laser blast from an X-Wing pretty much meant the end of the line for our dapperly dressed TIE pilots.

But early on in the marketing campaign for The Force Awakens, we saw one crash land in the desert. How could that be possible, I wondered?

Turns out, the Empire's First Order has a few new tricks up their sleeve.

May I introduce you to the First Order Special Forces TIE Fighter, a two-seater variant of the venerable design.

Let's take a closer look at Hasbro's Black Series model of the ship, which is retailing for $169.99 right now. A quick look at the back of the box reveals a few little-known features of the craft, including the back-to-back positioning of the two crew members inside. Also note the rear-facing, slit-shaped viewport and the undermounted turret.

Going just a step further, when you open up the new Fantasy Flight Games' Star Wars: X-Wing Miniatures Game, one of the new cards in the game gives these snub fighters an in-fiction shield system.

So not only are these little beauties capable of doing a bit more damage than their forebears, but they can take a punch as well. Not that I'd really like to ride its flaming wreckage into the surface of Jakku, but my midi-chlorian count was already pretty low to begin with. 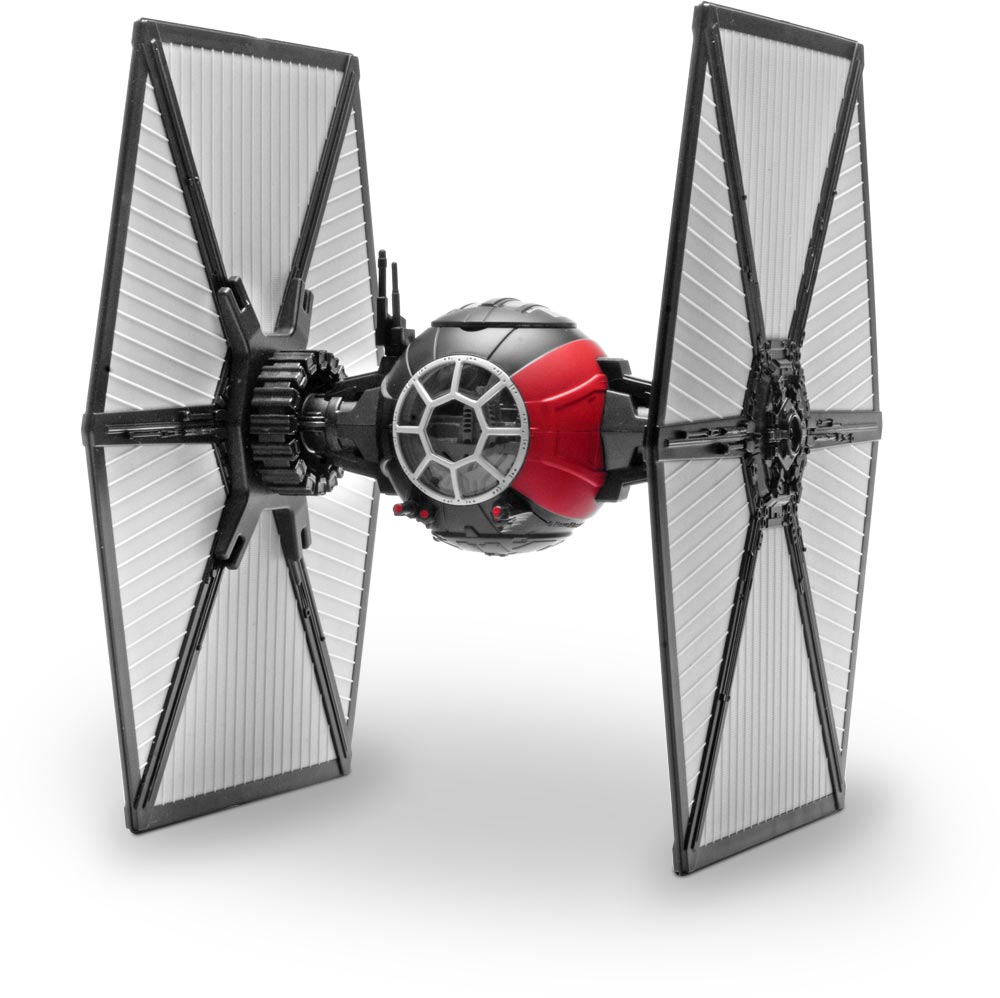 I also found another odd feature, not of the ship as designed but on one of the toys themselves.

The pre-painted Revell Snap-Tite model of the Special Forces TIE features a battery-powered, light-up cockpit. While it's a nice-to-have feature, it clearly speaks to the prominence the ship has as a set in the first movie. It's a bit weird to see that in a $20 plastic model kit, and my hunch is that inside one of these ships is where we'll find a very important early encounter between Finn and X-Wing pilot Poe Dameron.

I have been known to make mistakes, however, from time to time.

The original Stormtroopers from the first three Star Wars movies were not the best shots. Perhaps that was because they were all left-handed. Seriously, look at them as they come streaming through the blast door in the Rebel blockage runner. Nearly every last one is firing from the hip with their off-hand. Why, you ask?

Well, I uncovered the secret in the recently-released digital version of A New Hope; a short behind-the-scenes documentary titled Discoveries from Inside: Weapons and the First Lightsaber, where set decorator Roger Christian let us all in on his dirty little secret.

You see, he screwed up the guns for the first movie.

"This is a Sterling," Christian said, referring to the British Sterling submachine gun that served as the guts of the famed Blastech E-11. "I love the shape of this and I thought if I can convert that to the Stormtroopers this would have flame that came out the end, and smoke and it would go boom!"

These weren't dummy guns, but real firing weapons that shot off 9 mm blanks.

"The shells came out, and that really caused a problem because these are made with a left-hand [magazine]. I'm left-handed, so to me that was natural. If you're right-handed when they were firing they were hitting themselves [in the chestplate]."

"If you look at the Stormtroopers they are actually working it [left-handed]."

If you look closely at all the First Order soldiers streaming into battle, or taking up defensive positions against an X-Wing assault, they're mostly using their right hand to fire and the little Sterling-era magazine is poking out the right side of the gun.

Either they redesigned the Sterling to eject blank cartridges on the right side, or these new iterations of the Blastech E-11 don't actually fire. In today's era of pervasive CGI, it's probably not that big of a deal, but for blaster geeks like me it's a neat little morsel.

Most importantly, the change means that Stormtroopers in the movie all look a little more competent while on the job.

But while I was looking closely at these rifles I noticed something unexpected.

Look a little closer, and you'll see that most First Order troopers are also sporting a proper sidearm — a slim pistol, which attaches to the right thigh guard along a specialized bracket. That pistol shows up in dozens of representations of the figures, from Lego toys to Hasbro's Black Series to the tiny Micromachines line.

This solves another problem with the legacy Stormtrooper that always bothered me.

Remember in the first few movies how Stormtroopers had that silly black holster hanging at their hip? Who holsters a rifle unless they're on horseback? I mean dewback. This addition to the uniform solves that problem, and even the die-cast, Elite series Captain Phasma figure at the Disney Store features the attachment point.

The addition of a proper sidearm for Stormtroopers means that when their standard issue long gun goes out of commission, they'll always have a holdout weapon at their side. It also brings about the potential that our heroes could grapple that weapon away … or snatch it using Force-powered telekinesis.

Anyone who's ever watched a World War II movie has seen the famous Higgins Boat, also known as the LCVP. These are the tiny launches that ferried our troops ashore in Italy, and on D-Day during the Battle of Normandy. A Navy crewman stood at the rear, piloting the little open-top craft to shore whereupon the front door would fall open, disgorging a few dozen Allied troops to fight against Hitler's real-life Stoßtruppen.

The First Order has its own Higgins boat, and it's simply called a Transporter.

The Lego version is a great representation, and seems to have the same features common to those made by Hasbro and others. The weird little nodule on top of the ship is where the pilot stands. But it seems that there's also at least one hatch for a gunner nearby, as well as a few outrigger heavy weapons to stun the enemy on the way in.

But, by and large, this is a space Higgins Boat, and more than likely the same ship we'll see Finn and his comrades leaping out of early in the movie.

You may recall some late-breaking clips featuring the mighty Finn going toe-to-toe with a menacing First Order trooper who's wielding what looks like some sort of anti-Jedi melee weapon.

Well, I found it at in the toy aisle and … I'm not keen that poor soldier's prospects. 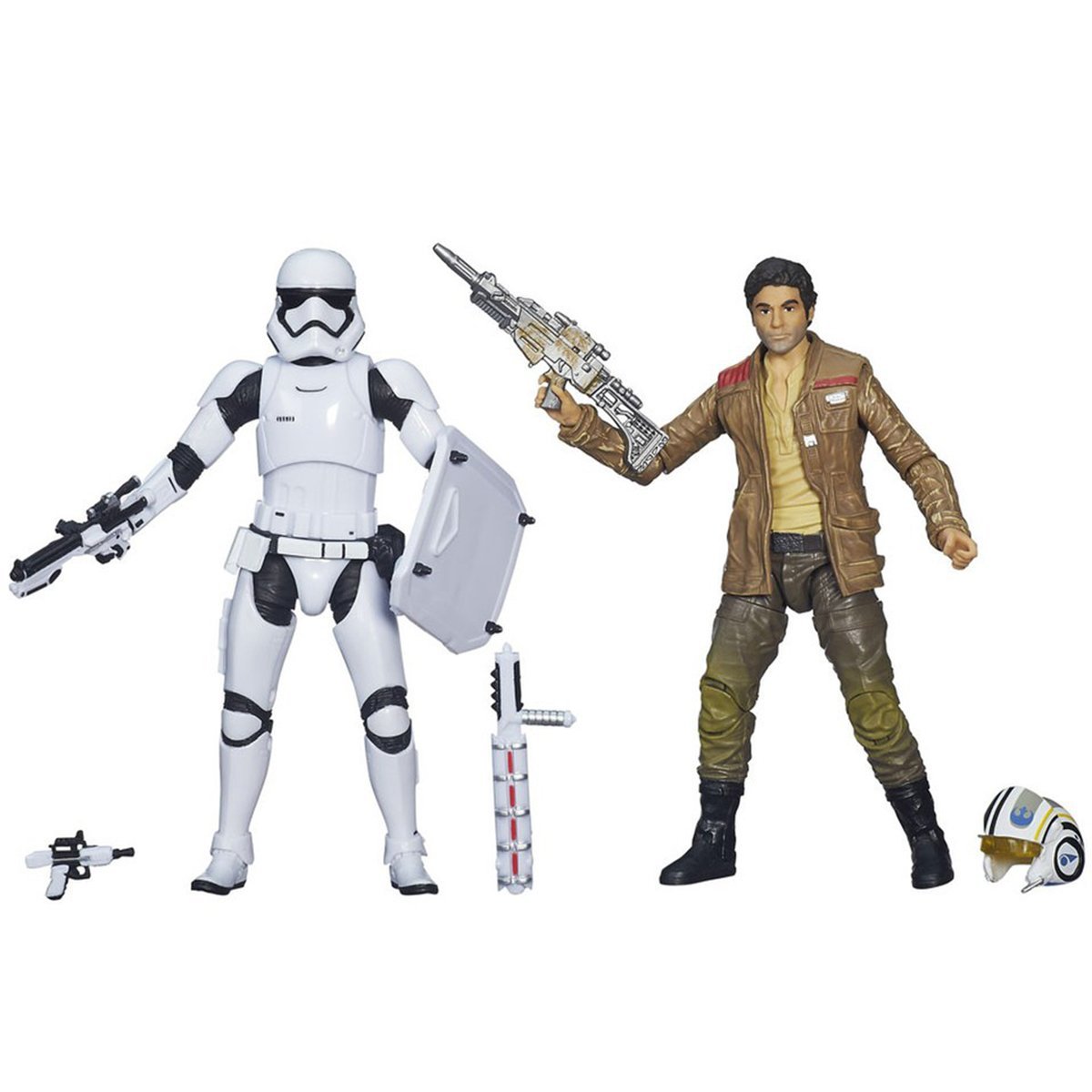 The First Order Imperial Riot Trooper, reads the back of the Target-exclusive Hasbro Black Series action figure set that sees him bundled with Poe, is "armed with specialized weapons [and] trained to subdue crowds in the most ruthlessly efficient manner possible."

I sincerely doubt that this glorified police baton will be any match for a lightsaber, but it might make for a good sparring opportunity for, say, a force-sensitive warrior learning to fight with a new weapon.

I suspect that all the troopers posturing will go down in history as A Force Awakens equivalent to Indiana Jones pulling a pistol during a fight scene in Raiders of the Lost Ark. The action figure does have a shield, though. I guess we'll see how that works out on screen.

Last — but definitely not least — my local Lego store had a few kits on display, including Kylo Ren's Command Shuttle. I did a double take as I walked by, and you can see why in our cover image above. Seems that the store's staff had a bit of fun, cleverly altering their display to include everyone's least-favorite Gungan.

The most interesting, and 100 percent authentic, model was of Rey's speeder, which sported a feature not seen in any trailers so far.

For all its bulk, it seems to be quite roomy on the inside. I wouldn't be surprised to learn that it serves as a kind of mobile living space, a place for her to hole up when the sandstorms get bad. It's a longshot, but maybe The Force Awaken's female heroine is a fan of the tiny homes movement.

There were a few other bits and pieces out there that didn't really jive with anything we've yet seen in the trailers. For instance, it seems like the rebels finally invested in some quality headgear for their ground forces, including this full-face helmet that also appears in the Black Series version of the same character.

Kylo Ren's command shuttle also appeared in both the black version, which we've seen before, and in a white version not once but twice. First, there's the Hasbro Black Series model, then squirreled away on the backside of this $60 Micromachines collection you can see a picture of it again — although the model in the package is very clearly black.

Also, perhaps X-wing pilots finally got the Star Wars universe version of a parachute. There's one figure, of the pilot Asty, that seems to be sprouting wings. On the front of the package they're skis, intended to be attached to similar pieces found in matching action figures. But on the back, those same skis clearly affix to his back and are referred to as "blades."

Whatever other bits of information you've pieced together, feel free to share them below.