The Flash, Green Arrow and a 4,000-year-old assassin walk into a bar

Share All sharing options for: The Flash, Green Arrow and a 4,000-year-old assassin walk into a bar

Last night, the CW began its epic experiment with the DC Comics universe, smashing two of its most highly charged particles — Arrow and The Flash — into one another for the second time in two years. That collision, which takes place on each show over back-to-back nights, will have resounding effects for both programs. And, if all goes as planned, the energy created will help with a new series, called Legends of Tomorrow, which premieres Jan. 21.

It's a bold move, and an expensive one. At the end of it all, the CW will have three serialized shows, all running simultaneously and each with large ensemble casts. There's a lot that could go wrong, but so far both the actors and the writers on The Flash have seemed up to the task — though not all at the same time.

So how did last night shake out? And what do we have to look forward to tomorrow?

Before we go any further, let me just clear the air: I have never seen Arrow. Why? Well, if we're being completely honest, this whole television recap business is fairly time consuming. Most days I've got my hands full with the video games thing, and watching TV takes me away from stuff like visiting strange lands in Minecraft and going pew pew from inside expensive spaceships. I was actually given the choice between The Flash and Arrow. So why did I pick Barry Allen over Oliver Queen? Because on Wednesday nights I generally have other plans.

But, knowing that this crossover was going to happen, I've remained purposefully ignorant of Arrow. If the CW's goal was to expand the audience for both shows by bringing them together for a tantalizing, mid-season crossover, then I would be a willing test subject. And, strangely enough, part one kinda worked for me.

I liked the episode, in spite of its pace. So far this season of The Flash has been all about multiple, rapid fire, nearly nonsensical plotlines. But they've all been bound together with solid acting and emotional arcs that have kept me invested in the characters. After last night, I'm excited to spend more time with the cast of Arrow when I got the chance.

But I'm still not sold on Legends of Tomorrow. It's up to part two, tomorrow night's episode of Arrow, to really sell me.

And, strangely enough, part one kinda worked for me.

Back to The Flash recap: While the episode's transitions were jarring at times, overall the first part of this weird crossover was a success. Our main characters, Barry Allen (Grant Gustin) and Oliver Queen (Stephen Amell), meshed well while the rest of the cast members seemed to coalesce around the newly introduced characters and villain. But, like most episodes of The Flash this year, it was a helluva ride.

Where to even begin ... Let's just start with the bad guy.

Last night opened with a bearded man stepping off an anonymous merchant ship in handcuffs. The stowaway had been caught on board with 32 knives secreted inside his antique peacoat, and the captain of the ship was just about to turn him over to the port authority when all hell broke loose. In the span of just a few seconds, the old man had dodged a bullet and stabbed everyone on the dock to death. The only clue to his identity? Fragments of an ancient stone blade.

This was our introduction to the immortal assassin known as Vandal Savage (Casper Crump), who came to Central City with a single mission; to kill Kendra Saunders (Ciara Renee), aka Hawkgirl.

Except, Saunders still doesn't know that she's Hawkgirl. The rest of the episode was a quest to bring her fully into her metahumanity. But, before our heroes can help her take flight, Vandal makes an attempt on her life when he barges in on her romantic dinner with Cisco Ramon (Carlos Valdes).

The Flash arrives with no time to spare and saves them both, but not before Cisco blurts out Allen's real name. Within the first five minutes of the episode, Saunders is in on Flash's secret identity and quickly brought into the inner circle at STAR Labs. 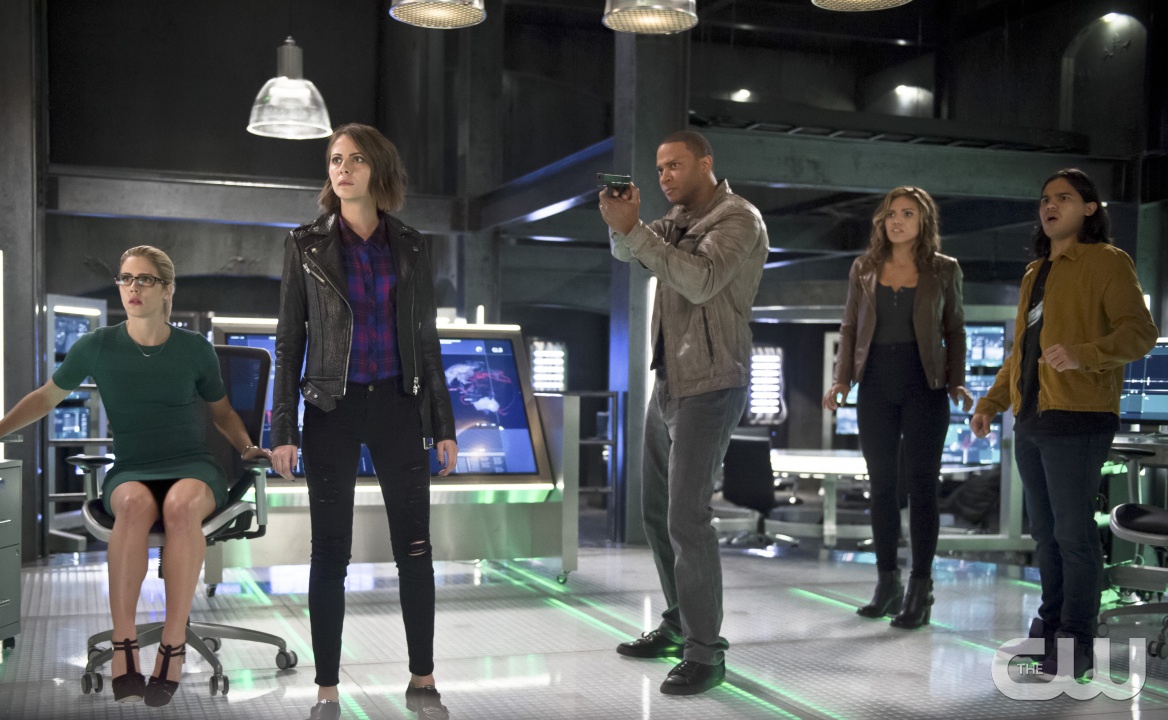 The team quickly decides that the best way to protect Saunders from Savage is to get her out of Central City, so they take a field trip to Star City to call upon Green Arrow and his team for some advice.

What follows is a warm little gathering at Felicity Smoak's (Emily Bett Rickards, who steals the show at every turn) high-rise apartment. Both teams gather for drinks, and Green Arrow and Flash get to have a little time to bond. Throughout the episode their relationship feels very much like a brotherly connection, with Arrow playing the role of the protective older sibling and Flash the conflicted youngster. Even when the two are engaged in combat, which is often, there's good chemistry there. If nothing else, seeing the two on screen together was worth the price of admission.

Things begin to get strange from this point onward. Frankly, it's all a bit of a blur.

Savage crashes the party, fights with the eight assembled heroes and then falls to what should have been his death. He doesn't die, however, because as we learn, he's immortal. Then Hawkman (Falk Hentschel) swoops in from out of nowhere and makes off with Saunders. Flash and Arrow fight Hawkman, save Saunders and eventually learn that she's a reincarnated Egyptian priestess whom Savage is destined to murder for the 207th time in 4,000 years.

Seriously. That all took place between a couple of Guitar Hero Live commercials.

Anyway, Central City's local Catholic church has recently consecrated an altar containing the Staff of Horus, which Savage needs to become powerful enough to kill Flash and Arrow, who run off to battle him there. The fight ends in a draw, with everyone kind of winning, and kind of losing — except the house of worship, which is utterly destroyed.

Meanwhile, Saunders flings herself off a building and sprouts wings. It sounds silly, but this was the episode's most tender vignette and placed Cisco and Saunders alone, gave them an intimate scene and let both actors have center stage all to themselves for a moment. My only complaint was that it all happened over about 12 words, but man did they ever make those words count.

The CW even tossed some money at it, spending cash on some quality CGI for Hawkgirl's animations, which were particularly well implemented.

The same cannot be said of Cisco's t-shirt this episode, which was merely so so.

With all the highlights out of the way, we've got to touch on the episode's lowpoint: It seems that Patty Spivot's character has spiraled wildly out of control.

Spivot (Shantel VanSanten) is Allen's main love interest this season, a relationship that's gotten a lot of screen time. But she's also the only single person on the program that hasn't been let in on Flash's secret identity. Why? We just can't be sure at this point because there has literally been no time to explain. Everything else is simply moving too fast.

Making matters worse, Detective Joe West is starting to ostracize her, putting her even further out of the narrative loop. As the weeks go by, I'm having a difficult time trying to put my finger on exactly why The Flash's writers even introduced Spivot's character to begin with. They just don't seem to want to do anything worthwhile with her.

Last night Spivot caught a glimpse of Harrison Wells while he was putting something in his trunk. Where was he? What was he putting in his trunk? Viewers were given little to no context. On that glimpse alone, Spivot followed him back to STAR Labs and ended up shooting him in the chest. Further compounding that bizarre decision, the writers then resurrected the contract of the actor who plays Jay Garrick (Teddy Sears) — who we haven't seen in weeks, mind you — and arranges it so that he is the only man who can save Wells' life.

For such a solid episode, that dealt with so many narrative challenges and interwoven plots so well, Spivot's arc was a real shame. Here's hoping it leads to a bigger payoff for her character, and ultimately for The Flash, later in the season. Tomorrow night we take the hunt for Vandal Savage to an episode of Arrow, and I can't wait to find out how it turns out.

Also, it'll be my first real episode of Arrow so I hope they go easy on me.