The first major, stand-alone Battlefield release in years to be developed outside of series originator DICE, Hardline is Dead Space developer Visceral Games first crack at a full Battlefield game. Previously, Visceral has contributed work on multiplayer maps for Battlefield 3 and 4, and also provided help with Battlefield 4's campaign. Hardline is also taking the series to untested waters: a non-military setting.

But Hardline's biggest departure is something else entirely. Battlefield has always lived and died by its multiplayer — in part because its campaigns have always severely underwhelmed (2010's Bad Company 2 notwithstanding). Battlefield Hardline's cops and robbers multiplayer is competent without breaking new ground. But for the first time in years, that doesn't feel like the game's main focus.

Battlefield Hardline's biggest push lay in its campaign, which places you in the role of Miami vice detective Nick Mendoza as he tries to uncover the forces behind a brand new turf war between drug gangs in the city. This is just how the story begins however, as a multiple-year storyline told over 10 episodes goes from Miami to L.A., then Nevada and back again.

The basic foundation of Battlefield Hardline isn't new. It's a first-person shooter whose gunplay emphasizes positioning, bullet physics and a decent amount of environmental destruction. But for whatever reason — and there are several good justifications here — Visceral has worked to add stealth mechanics to the Battlefield formula. This isn't a passive suggestion, either. Enemies have vision cones clearly indicated on the minimap, and a meter shows when you're in view and in danger of being spotted.

But the biggest departure in Hardline from previous precedent is the addition of non-lethal takedowns. While this can be weapon-based courtesy of melee attacks from behind or an optional taser, Hardline also offers an arrest mechanic. If you can sneak up on enemies, you can flash your badge, and they'll drop their weapons and put their hands up. This provides a limited window of time to handcuff and permanently disable them.

There's some measure of sophistication here. If you attempt to arrest more than one suspect at once, you'll need to cover everyone with your gun while acting, or risk someone getting ideas about resisting, and if another enemy stumbles on your arrest in progress, the jig is up and the firefight is certain to start. There are also special targets with arrest warrants out that will provide additional "expert points," which in turn unlock new gear to use in the campaign.

The arrest system offers a skeleton of new tactical depth to the series, and I appreciated the option to subdue rather than shoot. Navigating some spaces had a real sense of thoughtful, first-person stealth, and added some much-needed thought and strategy. I felt like I was casing targets, looking for the smartest way in, and more importantly, that "smartest way" didn't feel static. There are frequently multiple ways to get to objectives with their own pros and cons, and Hardline provides opportunities to use the grappling hooks and ziplines it introduces beyond the boring "press X to do thing" structure of so many other shooters.

Combined with the light investigation elements — which takes the genre-standard in-mission collectibles and makes them part of a bigger narrative of investigations tied to unlocks — Hardline's experiments give it a sense of identity that Battlefield has missed since Bad Company 2 in 2010.

Well, sometimes, at least. But that identity can feel a little fleeting.

Battlefield Hardline works unbelievably hard to avoid discussions of police violence, the militarization of domestic police forces and any meaningful commentary on its subject matter. In part, this is because Hardline is almost comically cynical — every cop is dirty, whether by choice or necessity, there are no "good guys," everything is shades of grey, etc.

Visceral makes some smart moves, though. Each in-game chapter is presented as an episode as if it were a TV series, right down to the "previously on" bumps that appear when you go back into the game after quitting, re-acquainting you with relevant plot points and such. This also gives good entry and exit points for each mission. 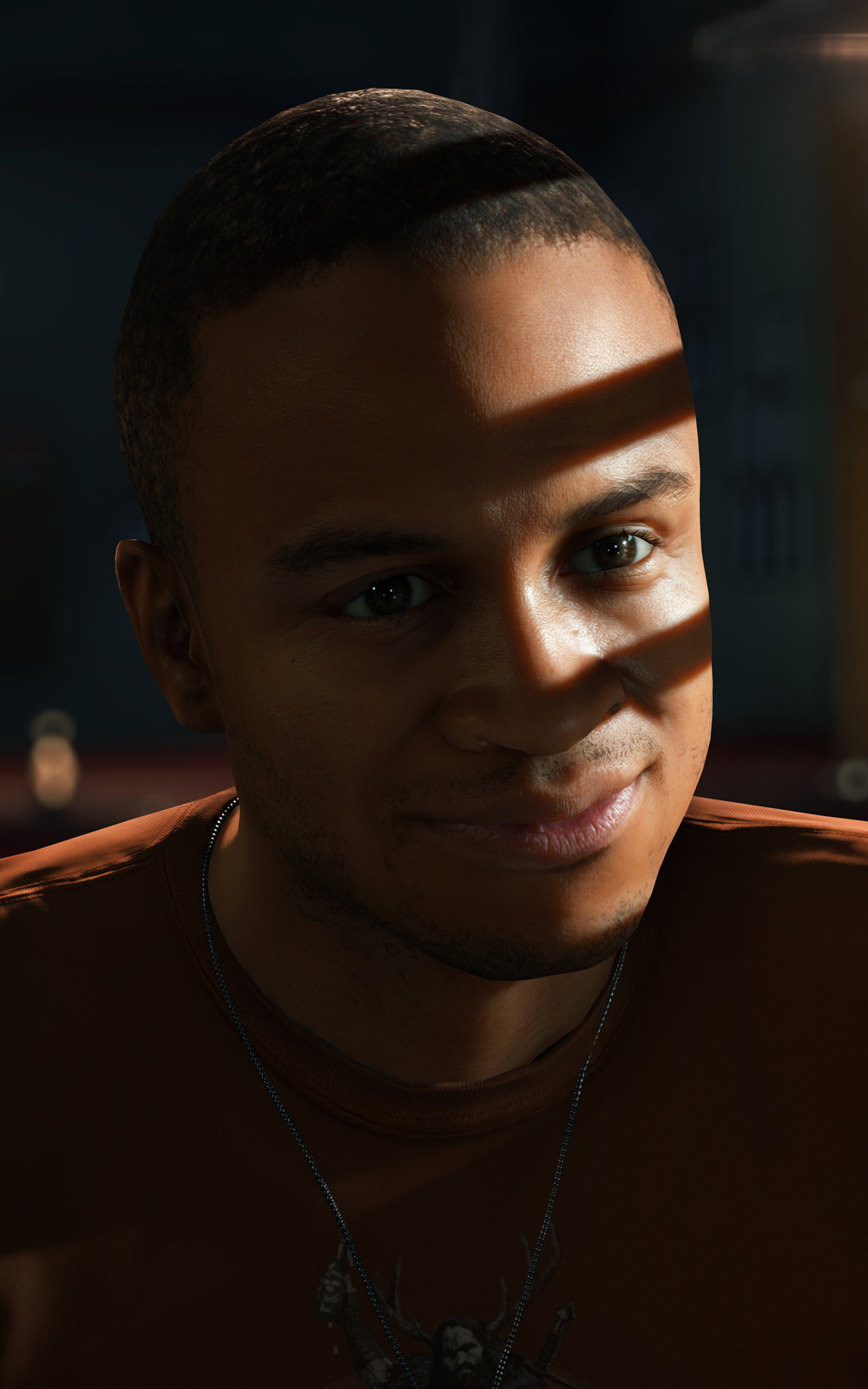 Hardline has a smoother narrative arc than just about any recent in-medias res shooter I can think of, because the episodic structure lets time pass. There's also some reasonably likable characters (who are admittedly not great people) and dialogue that's only occasionally terrible (and generally pretty ok). Hardline's biggest narrative issues are a wild variation in tone from moment to moment, hyper-serious one scene and Bay-sian action movie the next.

This isn't surprising, because Hardline is a video game, and I suppose there are expectations along with that about spectacle. But I was a little disappointed when Hardline leaned more heavily into action movie cliches over detective/post-noir TV conventions. And I'm not just talking about the explosions, or the tank — yes, there's a tank at one point, because this is a Battlefield game, after all. I'm also talking about the overall body count, which i'm pretty sure numbered in the hundreds by the time I was done, even as I endeavored to shoot as few people as possible while finishing the game for review.

The thing is, Hardline's non-combat mechanics feel glued on to the underlying game with varying degrees of cohesion. Visceral has said the game can be played without resorting to gunplay for the most part, but it doesn't feel designed to accommodate that very often. If you want to play without shooting, you're going to go through trial and error that goes above and beyond the usual stealth title checkpoint grind.

There are other polish issues that pop up while going the less-lethal route — for example, the handcuffing animation that accompanies arrests frequently clips through the game world, leaving enemies half-inside level geometry, or in the ground itself. Also, later, when you should not be able to arrest people, you still can, a fact the game pretty conveniently doesn't address in any way.

And, well, you actually can't finish Hardline without killing. There are several moments where shooting is literally the only option, not just the most likely one. These things work to undermine the grounded storytelling that Hardline seems to want when it isn't busy unlocking new weapons for you.

All that grounding is cast aside in Hardline's multiplayer, which takes most of the procedural elements the campaign adds and strips them out for a more conventional Battlefield experience. That isn't to say it's all gone — you can still subdue an opponent, which will feed you intel on their nearby teammates, and the heist elements present in parts of the campaign are a staple of the multiplayer's new modes. Hardline also eschews more dramatic military hardware in favor a more civilian-tinged garage, though there are still heavily armored options and helicopters around.

However,while the last three Battlefield releases have brought major improvements and expansions to the basic formula of the series — destructibility and squads in Bad Company 2, huge levels and player counts in Battlefield 3, and a combination of both along with level-based transformation courtesy of "levolution" in Battlefield 4 — Hardline takes an iterative approach to Battlefield's class-based multiplayer setup, one that leans more heavily on tone and subject matter related to its urban basis.

There are some smaller tweaks: Weapons and equipment are unlocked using in-game cash earned through play, rather than by leveling up other weapons. Levels are also smaller, with more room-to-room combat spaces contained within bigger environments. This leads to some cooler, more "intimate" moments as walls are torn apart by gunfire, though the sprawling, expansive scope of the last couple of Battlefield games has been dialed back considerably.

Visceral's biggest swing at leaving their own mark on Battlefield comes from a host of new modes oriented around their cops-and-robbers dynamic. Some are familiar iterations of old favorites: Heist mode plays similarly to Rush, added in Bad Company 2. In Heist, police players are tasked with defending a vault, while criminals must break in and then escape with the loot contained therein. Hotwire borrows from the series-defining Conquest mode, save that instead of capturing and holding points on the map, players must seize marked vehicles and drive them at a minimum speed to hold them. Blood Money features a central money pile that both teams must use to fill their own banks in order to win, and there are hostage and VIP modes as well.

While some of these are new to Battlefield, there's a sense of familiarity there for anyone who played Counterstrike or, more recently, Overkill's Payday and Payday 2. Underneath Visceral's interpretations of this kind of game design is the same excellent mechanical foundation that's driven Battlefield for years, one I prefer to many of the series' closest competitors. And gadgets borrowed from the campaign like the zipline and grappling hook add some new strategic options to the mix.

But the sense of newness and invention that the series has seen in all its proper releases isn't here, and the nature of Battlefield often seems at odds with the new modes. Snipers still seem too versatile thanks to Battlefield's very powerful pistol complement, and I'm pretty sure I've already caught players abusing glitches to shoot through walls in the wild. In fact, the carnage and destruction demanded by a Battlefield game seems to hold Hardline back from being something truly different, something that explores the ideas that Visceral toys with. As it is now, Hardline feels somewhat torn between its new ideas and its old obligations.

And, in possibly the most esoteric, me-specific observation I might make about Hardline, the setting feels weird. Every military shooter has some amount of cognitive dissonance, but Hardline in particular feels literally close to home. Where the campaign avoids any social questions whatsoever with its "all cops are crooked" themes, the multiplayer basks in military weapons in civilian settings. It's weird watching cops run around with grenade launchers, and it's disconcerting watching gunfights unfold "gloriously" in city streets, especially when they look like streets I've walked, near places I've been.

Battlefield Hardline can be both more and less than its predecessors

In areas where Battlefield has always excelled and pushed forward, Hardline presents experiments, rather than refinements or fixes. The result is multiplayer that feels very familiar, very quickly. But its campaign, while feeling not completely sure about what it wants to be, is more interesting and certainly all-around better than the last few years' worth of Battlefield games. The result is something that's both less and more than its predecessors.

At this time, I've spent approximately 20 hours playing Battlefield Hardline, including approximately 8 hours on live servers on Xbox One. However, given Battlefield's previous difficulties at launch and after, we will be monitoring the game over the coming weeks to see how it performs before removing our provisional tag.

Battlefield Hardline was reviewed in part at an event at EA's Redwood Shores location for its multiplayer component, and was reviewed on both Xbox One and Playstation 4. You can find additional information about Polygon's ethics policy here.