Developed in central Cameroon, Aurion is facing challenges and telling stories that are very different to most games...

There was no electricity, so the developers stopped coding. Team members filled lost time with stories, ideas, drawings. Nobody suggested that the project be suspended, even though the power-cut lasted a month.

For the developers at Kiro'o Games, power-cuts aren't so much an occasional novelty as a reality of working life. Based in Yaounde, the capital of Central African nation Cameroon, the company's production is at the mercy of an inadequate power system.

Kiro'o Games is working on an action role-playing game called Aurion, due out on Windows PC later this year.

"The rationale behind this problem is that our country does not produce enough electricity," says lead designer Patrick Hervé Meli. "Besides, we are still using water as our main source of electricity. So during the dry season there are not a lot of watts, we had to go through power failures periodically. We lost a complete month of technical work with this electricity issue."

When the electricity is down, the team works on "brainstorming." If Aurion is a success, Meli says the company will invest in solar panels. But commercial success is far from a given. The developers' stated desire is to express their own African-ness through the game's story and art. This is new territory for them and for gaming.

Aurion looks to be a standard and mechanically unremarkable retro action RPG with heavy Japanese design influences. But its design and feel are unmistakably fresh, offering a bold color palette and interesting unit designs. Its fiction is rooted in stories of exploitation and division, and in a desire for harmony.

A Kiro'o Games corporate video talks of gaming's "crisis of innovation," and an over reliance on a limited pool of "social and mythological inspirations." Aurion is based on "a magnified view of [African] traditions."

"Games can and should carry the seeds of wisdom that Africa can offer," continues the video narration. "We want to create an inner awakening through video games." To explain its mission, the company has developed a cultural outlook on the difference between mythologies across gaming's dominant geographies.

"American RPGs are based on conquest or saving the world for justice or peace," says Meli. "European RPGs, even if they draw upon Greek or Nordic mythologies, are often based on Christian philosophies and focus on prophecies of a chosen one. Japanese RPGs are based on the Hiroshima trauma. The hero tries to avoid a big explosion.

"What we are trying to do in Aurion is to give another perspective. The power in our game is mainly a consequence of an inner path, not just your physical training. To fulfill your own goal you must count on the connection between you and your ancestors." 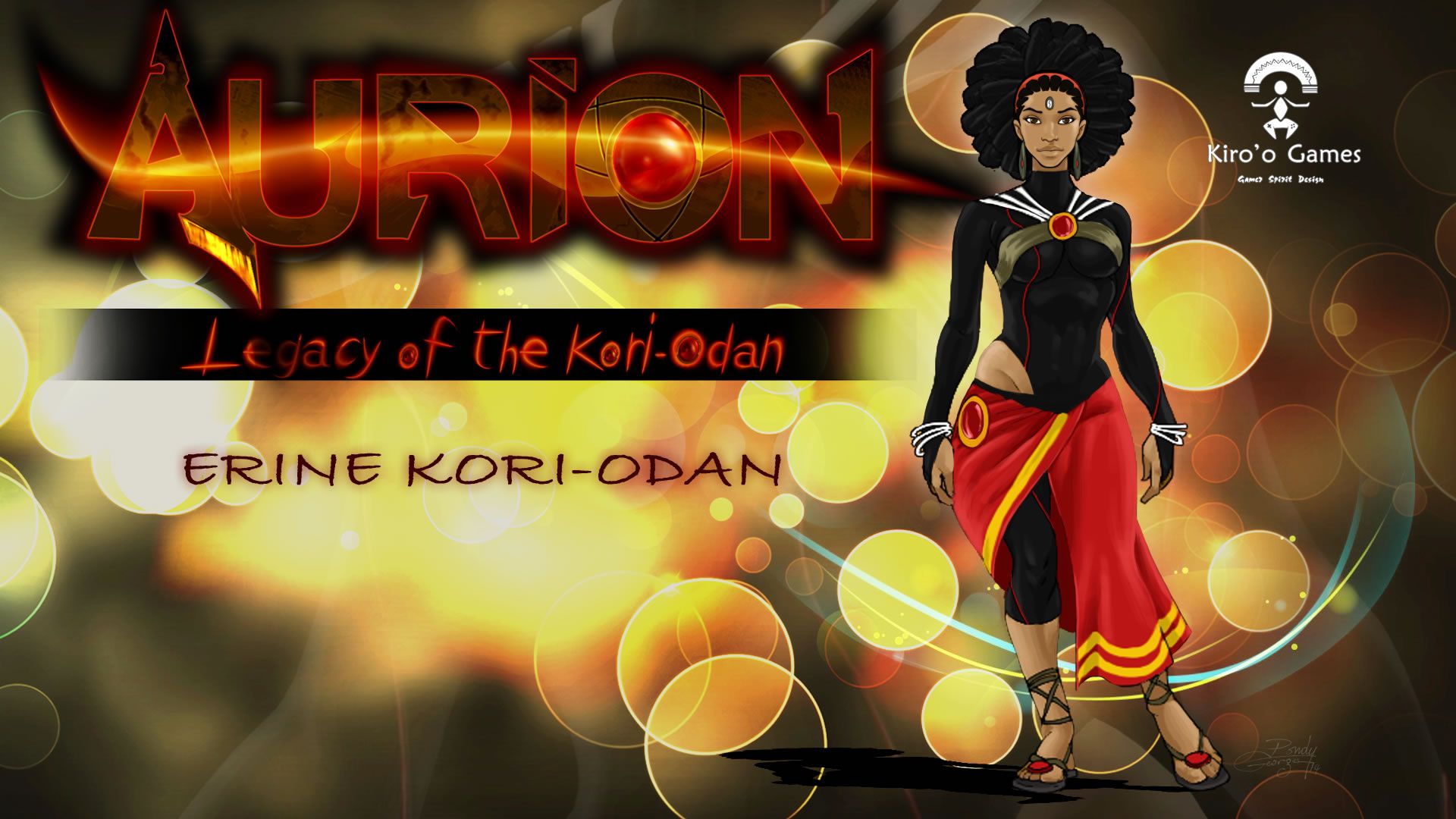 Cameroon is slightly larger than California, with a population of around 22 million. The literacy rate is 71 percent. Life expectancy is 55 years. GDP is $2,300. 70 percent of the population works in agriculture.

It is a place of mountains, shorelines, rain forests and savannas, hosting hundreds of language groups and folk traditions. The country was named by the Portuguese in the 15th Century for its coastal multitude of shrimp (camarão). It was colonized by Germany in the 19th Century and subsequently carved up by the British and French. It has been independent since the early 1960s. Famously, Cameroon became the first African nation to reach the World Cup quarter finals, in 1990.

Kiro'o Games claims to be the country's first game developer. Like many game development studios, the company was founded by college friends, inspired by the games they loved to play, most especially RPGs. Together, they created amateur demos and attracted volunteer contributors.

In 2011, work began on Aurion, really as an ambitiously scaled amateur project, with much of the artwork cribbed from other sources. By 2013, the team began to organize into a professional outfit, and named itself Kiro'o Games (Swahili for "Spiritual Vision").

Sponsorship comes from the Ministry of Arts and Culture of Cameroon as well as backing from local and international investors. The company's leaders are a regular feature on Yaounde's growing circuit of technology industry development seminars.

"The team is made up of young Cameroonians from all across the country. We work hard in difficult conditions," states the promotional video, showing team members working in the dark during a power-cut. Meli says the team has been "in crunch mode since the beginning." Many team members "live in the studio from Monday to Saturday."

Hiring talent is also a challenge. This is a country without any kind of game development heritage to draw upon. There are no GDCs in Cameroon, no places to poach talent. It must all be created and mostly self-taught.

"The artists didn't know at the start how to use a graphics tablet," explains Meli. "We drew on paper and scanned into GIMP [an open source graphics program]. So, you can imagine the training work done to get to the level you see in the game trailers." 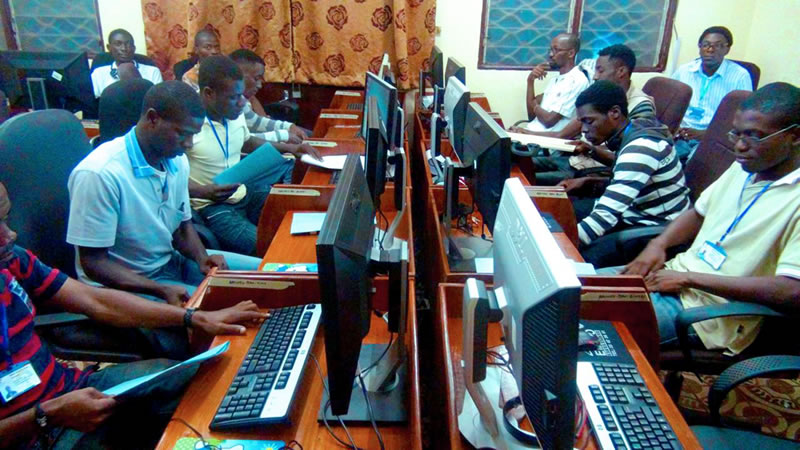 So, where did the developers come from? "The founder [Guillaume Olivier Madiba] chose artists with experience in paper comics to design the characters and painters who liked to paint natural backgrounds," adds Meli. "He turned them into video game character designers and background artists in two months. It was like preaching in the desert when he explained 'tiles' and other stuff to the guys in the early days."

During the first weeks, everyone in the studio repeatedly watched making-of documentaries of games like Metal Gear Solid 2. Today, the office is fully kitted out and the game is being made on an internally created engine. "Now, the guys are good at what they do."

"The duty of projects like ours is to create a new industry on the continent to give artists and programmers a new hope to have a good career and earn a living," says Meli. "That’s what happened in football. After Cameroon was the first African country to get the quarter-finals, African footballers got international recognition."

Kiro'o Games is seeking to tell its own stories. It's a pattern that is emerging around Africa. In Kenya and Nigeria (two very different countries) developers create games based on designs established in Asia and the West, but with the first sprinklings of their own flavor and style.

Throughout Africa, games players come together to play, share and compete. This is not a game culture striving to catch up with other geographies, but one that is shaping itself.

The development of new games studios in Africa is likely to be sporadic and varied in such a diverse continent. IT News Africa named its top ten African game studios back in 2013, with four based in South Africa. The other six were spread around Morocco, Uganda, Nigeria and Kenya.

There are 54 countries in Africa, almost all of which are made up of an astounding mixture of traditions. Yet very few of those stories have made it into games or, to be fair, into the wider global media culture.

Wikipedia names 84 games that are set in Africa, including around 20 that are based on animals, hunting or wildlife, with a smattering of driving and touring titles. Most others feature visiting Westerners involved in combat. The heroic white man in the exotic jungles of Africa is an entertainment tradition that goes back to Tarzan, but in the special case of video games, most fictional visitors to that continent come heavily armed and in uniform. Kiro'o is creating a martial fantasy of its own, one that draws upon local traditions. 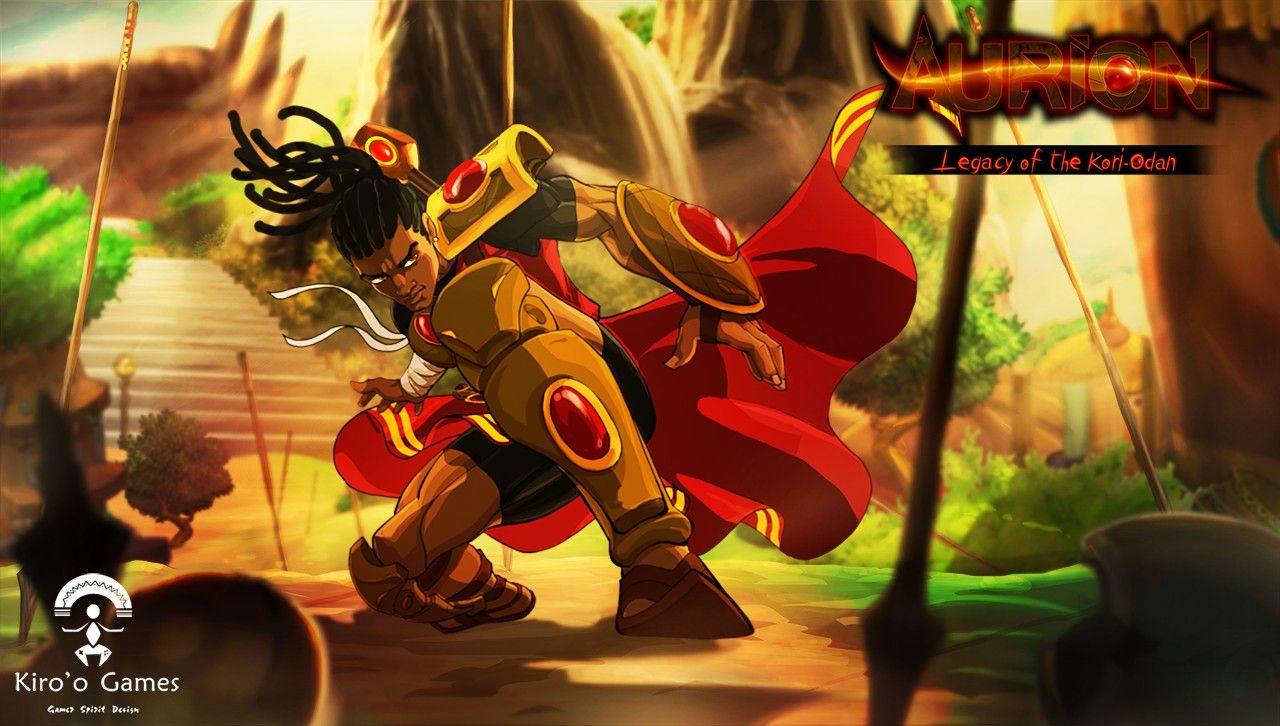 "There is not in fact one 'African mythology,'" says Meli. "We are really diverse. In Cameroon alone we have over 250 ethnic groups. But in Aurion you will find architectural inspiration inspired from West Cameroon tribes. Clothing of an African inspiration, but without making it too exotic. The lance of the main character, Urithi, was designed with the ambition to mix a lance and a Zulu shield."

Acknowledging that the team hasn't tried to reinvent an entire genre, he says that the game is much more than just another RPG, with an African overlay. Aurion, which is split between over-world exploration and 2D combat, is also inspired by a host of games, like the Tales Of series, Breath of Fire and Street Fighter.

But the story and its particulars draw on themes that are both unique to Africa and that seek to appeal around the world. "Aurion’s scenario is an analogy of the African story and our challenge as a promising continent," adds Meli. "But the goal is to provide universal inspiration for real life dilemmas of gamers all over the world."

Most RPGs contain a mystical power, and Aurion is no different, although its source is very much rooted in many African stories.

"The energy in the game is based on the connection with ancestors which is something very common in African myths," says Meli (pictured). "The idea is that someone can be connected to his or her ancestors’ knowledge and strength if you are synchronized with their inner value. Everyone has a king, thief, hero or tyrant in the blood, so it leaves you the capacity to connect with your bad or good ancestors if you are good or bad."

A challenge, not a problem

Kiro'o Games is a commercial enterprise, with a stated goal of leading an emerging generation of studios in Africa. Such is the sting of African under-representation and misrepresentation in games, that a greater mission is also understood.

"What we want to change first is the perception we have about ourselves," says Meli. "Africa is one of the most promising continents now. Young leaders and new billionaires are rising up everywhere in the continent. We are living in a connected world where some frontiers will soon mean nothing, so it is important that other people start to look at us as partners for a better humanity. In the common imagination, Africa is the worst continent on earth. That’s maybe true on a certain point of view but for us at Kiro’o that’s a challenge not a problem.

"We can really reinvent the meaning of prosperity and inspire everyone. That’s what we are trying to do beyond the fact of just making games. It will be cool if our story as an African studio also inspires young Russians, Libyans, Americans and, of course, young Africans."