The creator of Loom wants to make a sequel, would only 'entrust' it to these three studios

Share All sharing options for: The creator of Loom wants to make a sequel, would only 'entrust' it to these three studios

In a crowded session at this year's Game Developers Conference, Brian Moriarty, author of the 1990 adventure game Loom, delivered a post mortem on the game to a packed audience in San Francisco. At the end, he said that he is eager to make a sequel and named the three studios he would be willing to collaborate with on the game.

Throughout the presentation, Moriarty became emotional many times about the years he spent on the Skywalker Ranch working with the Lucasfilm Games SCUMM engine, and with the audio engineers at Skywalker Ranch to create the unique and musical experience that became Loom. He went on to talk about the fan mail he still receives, to this day, from people in the industry or who hope to one day make games that were inspired to create by their experience with Loom. 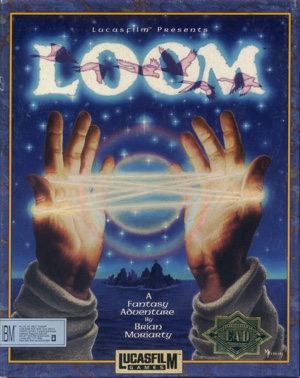 From his talk today, it's clear he wants to do it again.

"It’s a very humbling experience to have touched so many people, and to have been given the absolute freedom to experiment with George Lucas’ money," Moriarty said, which was met with a chorus of laughter.

"It was a privilege I can never repay, and probably never repeat. However there are now three studios who I would entrust with the sequels: Telltale, Double Fine and Wadjet Eye. Talk to me. I’m on the make."

Moriarty's post mortem on Loom, which was delivered 25 years to the day the game originally went gold, revealed many secrets. None were more touching than hearing about his own playthrough of his creation just weeks before.

"While preparing for this speech, I played Loom from start to finish for the first time in over a quarter of a century. I had forgotten nearly half of it," Moriarty said. "I remember the general scheme and plot, but many little details, many lines were gone. So I had the extraordinary experience of playing my own game as if it were sort of someone else's. And through the pain of making it I have really not been able to see what I had done. You know, it really doesn't suck. Yeah, it’s shorter than normal and easier than normal, but that's what Telltale does every day now."

The Rings of Power shows the cost of doing good