Mortal Kombat X sheds some of its legacy, but shoves itself into a new future.

There was a time when the Mortal Kombat series used to be about one-upmanship. The original arcade game outdid Street Fighter's violence with its showers of blood and — for its time — graphically violent Fatalities. Successive Mortal Kombat entries have attempted to outdo what came before, piling on new finishing moves, adding mini-game distractions and ballooning its roster.

With 2011's Mortal Kombat, developer NetherRealm Studios got back to basics, focusing on classic characters, overhauling the fighting game's mechanics and resetting two decades' worth of convoluted fiction. Mortal Kombat X builds on the 2011 game's framework, both in its story and its technical implementation; the game's fighting mechanics have been refined more than they've been reinvented, save for a key addition that adds variety, not just complexity.

Mortal Kombat X boasts a robust set of single-player modes, but it's the main story mode where NetherRealm has clearly spent the bulk of its time. Over the course of a dozen chapters, each focused on a particular fighter, players battle their way through a story that picks up where the previous Mortal Kombat left off. The campaign of MKX, which runs a pretty lean four to five hours, jumps back and forth between events set during the 20 years immediately following Mortal Kombat, through various dimensions and across its political factions. You'll mainly play as Mortal Kombat's good guys — or at least those who seem like they're on the right side of the conflict at any given time — in one-on-one fights interwoven between pre-rendered cutscenes.

You'll do about as much watching as you will playing; some of the cutscenes that intersperse fights run a good five minutes or more, some are peppered with quick time event-style button prompts that give these moments more of an interactive movie feel.

it's fun to see the dynamics of Mortal Kombat X's mothers, fathers, sons and daughters explored

Fortunately, the story of Mortal Kombat X is pretty great, in a silly, sci-fi kung fu movie way. NetherRealm throws in a couple satisfying cameos and nods for players who stuck with Mortal Kombat after the third game in the franchise, and there are a few moments where things get serious. Family relationships are touched on throughout the campaign, and it's fun to see the dynamics of Mortal Kombat X's mothers, fathers, sons and daughters explored. The story is complex, stuffed with playable and non-playable combatants from throughout the franchise, but NetherRealm juggles all those characters deftly.

The cast is a mix of old, new and vaguely familiar. The playable roster boasts about two dozen fighters, including veterans Scorpion, Sub-Zero, Mileena, Kitana and Sonya Blade. MKX also explores the next-generation of fighters in a literal way; the daughters and sons of Johnny Cage, Sonya. Kenshi and Jax are introduced, as are a handful of all-new creations, including two particularly fun Outworld-born characters, the insect-like D'Vorah and two-in-one fighter Ferra/Torr.

Notably, X features one of the lowest ninja quotients of any Mortal Kombat game. That's my way of saying that the cast shows a welcome diversity of characters young and old, men and women, human and non-human. NetherRealm has also thankfully simplified the over-complicated and sometimes gaudy design of some of its characters, and the women in Mortal Kombat X are far less sexualized than they've been in the past, with outfits that feel more appropriate for life or death fights.

While Mortal Kombat X's initial character roster is smaller than that of previous games, NetherRealm has essentially tripled the number of characters to choose from, thanks to the new Variations system. Every character in MKX comes with three fighting styles that dramatically mixes up their special move set, which have a big impact on each character's tactics. A fighter like Jax, for example, might play more like a grappler in one variation (Wrestler), but be more effective in zoning his opponent in another variation (Heavy Weapons).

Veteran characters like Scorpion or Sub-Zero will always have their signature moves — spear and ice ball, respectively — across variations, but they'll be outfitted with other complementary attacks. Scorpion can summon a demon in one variation, while Sub-Zero can create ice clones of himself in another. 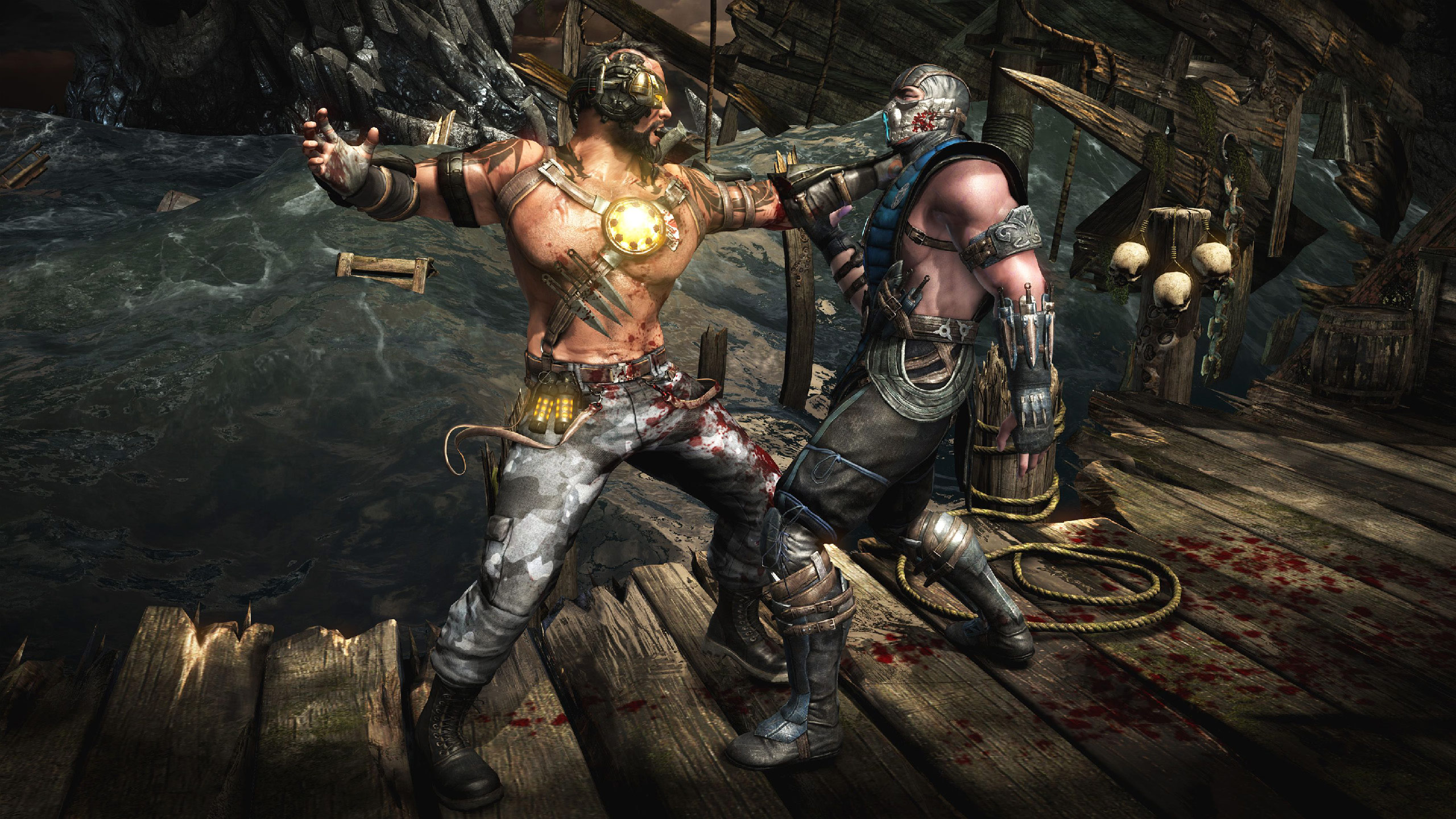 In the dozens of matches of Mortal Kombat X that I've played online (via a wi-fi connection), I've experienced a wide variety of technical performance. Some early matches felt a bit sluggish, while others had a handful of full-second delays in action as the networking code caught up. But recently, the game's online performance has seemed solid; I've experienced a few fights that felt almost indistinguishable from offline fights. We'll be keeping an eye on the game's online performance at launch.

An online component of the game we haven't spent much time with is Faction Wars, the persistent meta-game. With Faction Wars, players can join one of five groups, and simply by playing the game both in single-player and online multiplayer, contribute to that group's global standing. Virtually everything a player does in Mortal Kombat X contributes to their faction in some way, adding experience points to the overall pool. Players will be rewarded faction-specific rewards if their chosen group is at the top of the global weekly ranking, but we haven't experienced those rewards ourselves or seen what material benefit they'll have. It also remains to be seen if the Lin Kuei (Sub-Zero's group) will ever not be the game's dominant faction, as it's currently the faction most players seem to have aligned themselves with.

Exploring those variations, finding one that suits your particular play style, or even opening yourself up to understanding new possibilities for a particular fighter, can be a lot of fun. The implementation of Variations is brilliant: NetherRealm has given players a familiar foundation upon which to relearn characters they've been playing with for decades.

New in X is a stamina bar that depletes as players dash, run and break combos. The stamina bar appears to limit the effectiveness of some zoning strategies, while making it a little tougher to break your opponent's combos. It's hard to say at this stage what the real impact of the stamina meter will have on MKX competitive play, but your opinion of it will probably depend on whether you were on the giving or receiving end of zoning spam in past games.

Beyond story mode, players have plenty to experience in single-player. Towers return, allowing players to climb ladders of one-on-one fights, and Living Towers offer new, daily challenges, where players may be fighting upside-down or at twice the speed, or dealing with rockets and grenades raining down upon them in others. The Krypt also returns, albeit modified somewhat — it's now more like a first-person dungeon crawler. You'll find items, unlock secret areas, solve puzzles and even battle monsters in order to unlock everything MKX has to offer. It's a bit clunky to move around in, but it's also incredibly charming.

Online, Mortal Kombat X offers a comprehensive set of competitive modes, including one-on-one fights, team battles and King of the Hill, where up to eight players can get together in a room and fight for the top spot. King of the Hill remains a great place to learn new techniques and show off your skills, and NetherRealm has made the venue better than ever for playing competitively.

A new online mode called Tower Battles serves as sort of a hybrid between single-player and online multiplayer. Tower Battles are essentially online versions of the game's challenge towers, in which players will compete for the highest score in a particular challenge. You're still fighting against computer-controlled opponents with various modifiers and win conditions, but you're doing so in real-time against other players. In between matches, you'll get a glimpse of how your competitors are doing, which can add a real sense of tension. It's a fun competitive option for players who might not yet be ready or too intimidated to explore the more direct player-versus-player modes. 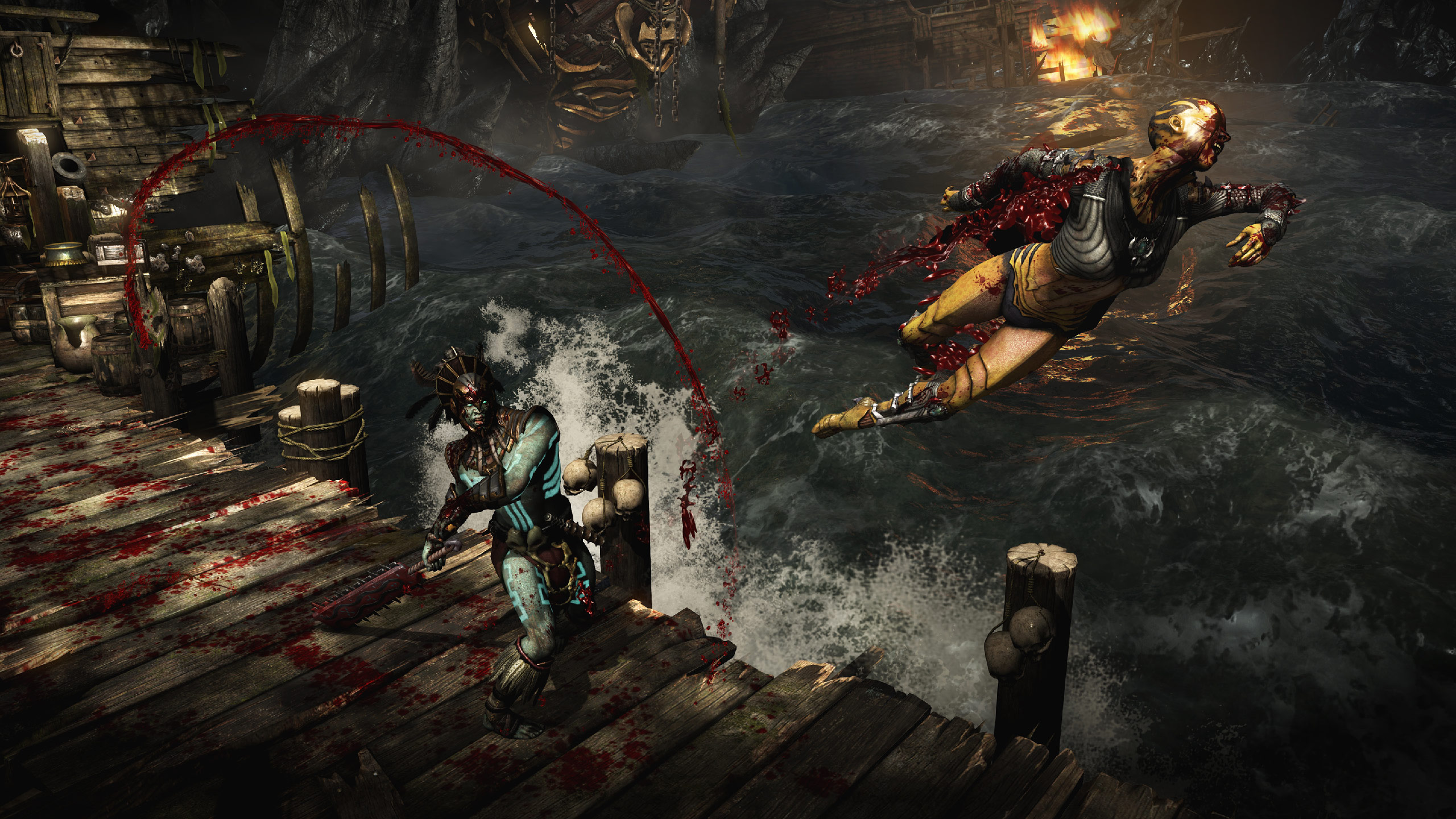 A history of violence

NetherRealm has perfected many of the mechanics of Mortal Kombat and it's also reached a new level of violence with Mortal Kombat X. Fatalities are more gruesome, more graphically violent than ever. Characters are split and sliced in half in newly disturbing detail, and the dripping viscera on display is more unsettling in its realism than ever before. This is a pretty sickening game if you don't like the sight of blood. I've always given the sadistic violence of Mortal Kombat a pass, because it's so ridiculously over the top that it's hard to take seriously. We've seen allies brutally kill each other in other MK games, but it sure is a new level of creepy to see Jax crack his daughter's head in half or watch Cassie Cage delight in tearing off her father's jaw.

The slightly-less violent finishing moves, Brutalities, are a fantastic addition in X. They require a lot more skill to pull off that the rote input memorization of Fatalities, and add some real flair to multiplayer matches. Players need to meet certain match conditions to pull off a Brutality — Mileena, for example, might need to successfully land five Rolling Thunder moves in one match and finish the fight with that particular move — so there's a real sense of accomplishment when you pull one off. Brutalities add a new level of mind game to Mortal Kombat, as you might start to notice that an opponent is behaving a bit strangely, then realize that they're trying to catch you with the new finisher. There's also a palpable sense of humiliation when someone manages to finish you with a Brutality, especially when other players might be watching in a King of the Hill match. It's a new finishing move, yes, but it's also another successful step in replicating the classic Mortal Kombat arcade experience.

Mortal Kombat X is friendly both to casual players who want to experience its rich suite of single-player content and knock around with some friends, but deep enough for competitive players who want to plumb its roster and variations. It's a robust, feature-rich competitive fighting game that hones what's worked for NetherRealm Studios in past games, and even shows hints of restraint and maturity amidst the gory hyper-violence. Paired with an ambitious online meta-game, Mortal Kombat X is one of the best fighting games in the series.

Note: While Mortal Kombat X was reviewed using retail copies, multiplayer servers have not been operative for long enough to be certain of the game's stability. As such, this review will remain provisional until we have a clearer idea of MKX's launch state.