A recent update to Call of Duty: Black Ops 2 adds Snapchat's equivalent of QR codes to a few in-game posters and could be teasing the next game in the series.

As YouTube user Drift0r shows in a video he published this week, the console versions of Black Ops 2 now have Snapchat watermarks in at least a pair of multiplayer maps. Polygon verified that scanning those images in Snapchat adds "callofduty" to your friends list on the social network, as you can see in the image below.

Two years ago, Drift0r released a video that leaked Call of Duty: Ghosts details before their official announcement. 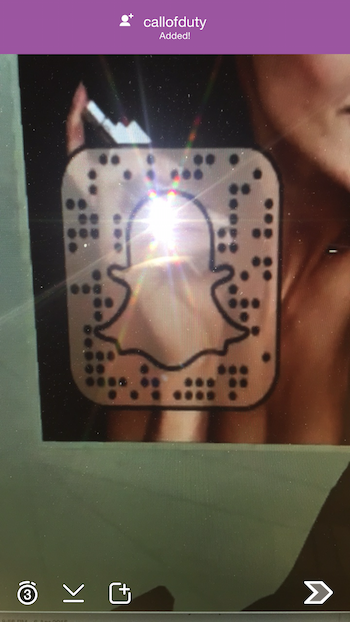 Friending Call of Duty on Snapchat reveals a short video that begins with a tight shot of a blinking eye. The camera cuts to a forest and pans left as light beams spread around the trees. "Listen only to the sound of my voice," a narrator says above a bed of atmospheric music before the 10-second video ends.

It's abstract, but reminiscent of the brainwashing and clandestine activities that serve as leitmotifs in the Black Ops narrative. You can see that video below, courtesy of Twitter user ‏@Nipple_Nicholas.

Given that the new features appear in an old game from a developer creating the next game in the series, they could be the beginning of a viral marketing campaign teasing the next Call of Duty game. And that could be Black Ops 3.

A year earlier, Hirshberg announced that the Call of Duty franchise was moving to a three-year, three-developer cycle with Sledgehammer Games added to the series alongside developers Treyarch and Infinity Ward. The most recent game in the series, Call of Duty: Advanced Warfare, was Sledgehammer's first. It was released last November for PlayStation 3, PlayStation 4, Xbox 360, Xbox One and Windows PC.

"This fall's game will be Treyarch's first on the three-year development cycle," Hirshberg said. "It will be loaded with innovation, and we're excited to share more details with our community soon."

Activision tends to reveal each year's new Call of Duty game in May. The publisher revealed Advanced Warfare in May 2014, its predecessor, Ghosts, in May 2013 and before that, Black Ops 2 in May 2012.