Controversial Magic: The Gathering card sells for $14,900 on eBay, half goes to charity

Share All sharing options for: Controversial Magic: The Gathering card sells for $14,900 on eBay, half goes to charity

A rare and controversial Magic: The Gathering card sold for $14,900 on eBay, and the seller says he'll donate half of the proceeds to charity, according to the auction site's listing for the mythical Tarmogoyf card.

"You are bidding for a piece of Magic the Gathering history," the item's description reads. The owner and seller, Pascal Maynard, drew the card in the recent Grand Prix Las Vegas event, which took place last month. "I opened this Foil Modern Masters 2015 Tarmogoyf Grand Prix Vegas Stamped in the Top 8 and it created a huge story in the community, which you can probably find on the internet via #GoyfGate #FoilGoyf #MakeMagicHistory."

His decision to choose Tarmogoyf sparked some debate and controversy within the Magic community, as the hashtags above imply. You can watch it happen — and the announcers yuk it up — five hours and 40 minutes into the Twitch video below.

"The card is Near-Mint, it's fresh out of the pack and sleeved as soon as I could," Maynard wrote. "It's got two minor scratchs on the top left border, probably caused by booster packaging. I offer to sign the card or the sleeve for authenticity. 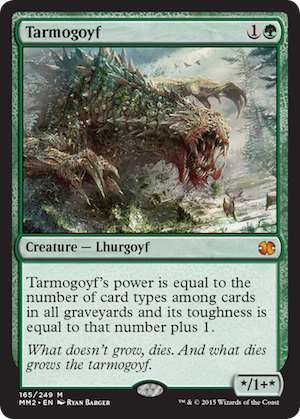 "I'm eager to see how much it can sell for and I'm even more excited to announce that I will donate 50%* of the proceeds to the Gamers Helping Gamers charity. This pro player needs money to travel, but more importantly, some young Magic players might be unable to afford college. I hope we can change that!"

His asterisk denotes that he's referring to half the proceeds after eBay's cut.

This version of Tarmogoyf is part of Wizards of the Coast's second Modern Masters set, which "takes players back to some of the most remarkable planes from recent history," according to the official site. Released last month, the Modern Masters 2015 Edition includes 249 cards.

"Tarmogoyf's power is equal to the number of card types among cards in all graveyards and its toughness is equal to that number plus 1," the card's description reads. "What doesn't grow dies. And what dies grows the tarmogoyf. "

A less rare version of the card is selling for $199.99 Channel Fireball, which sponsored the Las Vegas Grand Prix. Other eBay auctions for Tarmogoyf range between about $120 and $294.99, depending on several factors like damage and use.