Share All sharing options for: A hands-on with Oculus Rift reveals only the beginning of a long journey

Having Insomniac make a game for the Oculus Rift wasn't a good idea. It was a great idea.

The virtual reality headset has been around for a couple of years in a couple of different forms. At GDC 2015, I strapped on the real deal and played real games. They call it the CV1. Revealed last week, it's the version that Oculus believes is finally ready for consumers' hands, heads and, at the risk of being dramatic, hearts.

But the thing that makes VR so mesmerizing is also the thing that makes it such a difficult sell. Writing about using virtual reality, I am acutely aware, is entirely different from experiencing virtual reality — and it is an experience. If you wind up one day a true believer, it'll probably only happen after you've strapped in, dimmed the lights and entered what sometimes feels like an alternate dimension. Up until that moment, VR feels like a curiosity, a flirtation, maybe even a fad like 3D. Sure, you can pay a few extra bucks to watch the latest summer blockbuster with an added dimension, but it's optional at best, gimmicky at worst.

The promise of VR is nothing new, but Oculus was the first company to meet expectations. And it certainly won't be the last, as Sony's Project Morpheus, Valve's Vive and even Starbreeze's efforts are already proving. And long before there was any consumer version to speak of, Facebook believed enough in its promise that it purchased the company for $2 billion. Developers have been tinkering with it for years. The Oculus Rift, in short, has made believers out of many.

But the Rift VR headset is entering a new phase. It'll be available to everyone in the first quarter of 2016. It's time to start making real products, and at E3, I played four of them.

IT STARTS WITH GAMES

Palmer Luckey, the man most directly responsible for the Oculus Rift, imagines a future where virtual reality is more than a quirky way to play video games. But even if that future is true, he told Polygon, it still begins with games.

Enter Edge of Nowhere, from Insomniac Games, the creators of the Ratchet & Clank series. The third-person adventure game is unlike anything we've ever played in VR, largely because of its fit and finish. It looks, despite the CV1's limitations, gorgeous. It feels, because I used an Xbox One controller to play it, exactly like a AAA title. It just happens to be in virtual reality.

Developers are still getting to know the Rift, still figuring out how to use it, still poking and prodding an experimenting with how to create a game in VR and deliver an experience where the player behind the camera also has control over it.

"It's been educational," Insomniac founder Ted Price said at the pre-E3 Oculus event last week, "and it's been challenging. But it's also been thrilling."

The 10-minute demo takes place in the arctic. The camera floats behind a Pixar-like character as you leap across ice formations, go spelunking, explore cave formations by torchlight and run for dear life from crawling monstrosities. It doesn't feel like a demo. It feels like a real game.

I played Chronos, too, from former Darksiders developers at Gunfire Games. Revealed at last week's event, it is mysterious, highly stylized and utterly brutal, conjuring memories of Dark Souls.

Every inch of the game world was awe-inspiring. VR has that potential. This is where that technology departs from what you're used to. In this world you're a visitor, a disembodied floating camera hovering behind a little character with a sword and shield. Turn your head, and you can see the vast details in the cliffside cave world Gunfire created.

Unlike Edge of Nowhere, where the camera floats behind the player, Chronos‘s camera is fixed on a fourth wall. From room to room, it provides different vantage points. Like an old Zelda game, sometimes you're walking toward the camera, sometimes away, sometimes parallel, adding to the sense of wonder.

An early puzzle placed the camera at the end of a long corridor. At the far side was a giant rock monster. You need to get past him somehow, because if you try to fight him, you die. Solving the puzzle, though, takes advantage of the Oculus Rift's unique perspective. On the near side of the room, your left, there's door blocked by the gate. To the right is a crank attached to the door. Moving the crank wakes up the giant, so it becomes a race against time.

In standard video games, there might be some user interface element to show a player their progress. Or one might place the camera in a position to show a player both the character and the door opening in the distance. Not so in Chronos. It's focused on you. You can't see the door, and it takes a few blind cranks to wonder about your progress. You think it'd be nice be able to see. And thats when you remember that you're in control of the camera.

Hammering on A spins the crank and makes the door open. In the distance, a gigantic glowing rock sculpture trudges forward. Turn your head to the left — away from the action — everything in the word stays the same, except you see what the default camera angle can't: the door opening. You sprint through it just as your enemy gets within striking distance.

Inside the room are three smaller rock enemies, who are now all attacking. Shield up, you back away toward the door you came through, knowing the giant's stuck on the other side.

And that's when the giant, now on his knees, reaches into the room, swipes blindly and kills you in one hit.

This is a real game. If a future filled with virtual reality begins with video games, it's difficult to imagine two better products to prove it.

There is a world for virtual reality outside of video games, Oculus believes, and that's why they built the Toybox. It's a rudimentary world filled with, well, toys to play with, and explicitly is not a full video game. It's a destination designed to set the tone for virtual reality's possibilities.

Of course there were guns. I went inside. This is how it worked. 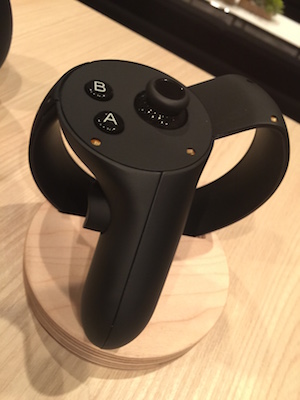 Palmer Luckey strapped on an Oculus Rift headset and two Oculus Touch controllers, one for each hand. In an adjoining room, I did the same. The Toybox began, and Luckey asked me to imagine a scenario where we aren't within 20 feet from each other but on opposite sides of the world. Virtual reality, in other words, renders geography irrelevant.

Inside the Toybox, Luckey and I appeared as glowing, disembodied pale blue heads and floating hands of the same hue. There are two triggers on each controller; pulling on both makes a fist. Pulling the bottom one allows you to grab onto objects. If you don't feel like grabbing anything, you can just stick out your index finger and make a finger gun. I did, pointing to the guy a few feet away who invented the device I'm wearing.

On a table in front of me were a bunch of blocks and stuffed animals and all manner of toys. I picked up the slingshot, pulled back its band just as I would in the real world and fired, reducing the garden gnomes in the distance to so much rubble.

Then I picked up the guns, which looked like blasters that Daffy Duck as Duck Dodgers would have carried, and Luckey tossed some boomerangs. I raised my arms, aimed, and pulled the triggers with my index fingers, left, right, left, right. The bullets rocketed out, leaving trails of smoke behind. The boomerangs fell, one by one. I'm a gunslinger. I'm a crack shot. I'm sold on VR.

At the pre-E3 Oculus VR event, the message was clear and unambiguous. VR is the future, and the future begins with the Oculus Rift. But there was also a subtler message underneath to those paying attention: We love this thing, but it's not perfect. It's just the beginning. 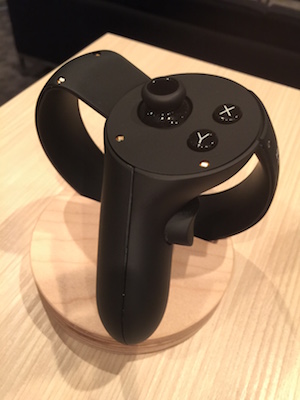 At times it seemed almost apologetic. So I asked Luckey and Nate Mitchell, Oculus' vice president of products, why, when presenting their first consumer product to the world, they had hedged their bets. Why were they so concerned with managing expectations?

The answer is easily found in every part of the presentation this week at E3. The Oculus Rift starts the VR revolution early next year; it does not complete it. Oculus wants everyone to understand that.

Edge of Nowhere, as beautiful as it looks, is still just a demo. Even when it launches alongside the headset, it'll be the first iteration of what everyone involved hopes will be a lengthy process of discovering how to make VR games. The Toybox, as transformative as it feels, is not a revolution. It's a demo deliberately filled with objects that speak of potential. Even Luckey admits that game developers would see its shooting gameplay as poor and come up with something better.

But inside all of that, they believe, lies the future. It's not here yet, they said last week and again this week. This is only the beginning.

It's difficult to disagree.